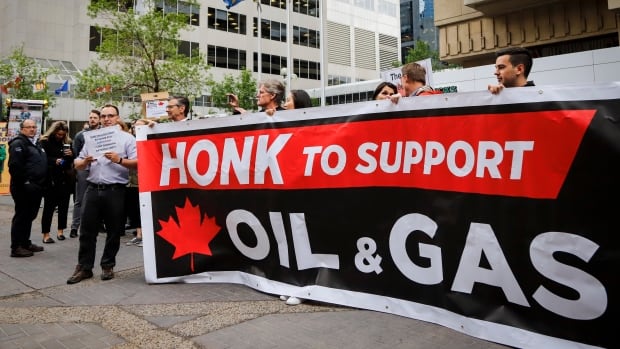 Canada’s oil and gas sector is on the ropes as COVID-19 crushes demand and a global price war pushes domestic companies to the brink of bankruptcy — but two opposition leaders say Ottawa should simply let part of the industry wither and die.

The Green Party’s parliamentary leader Elizabeth May says governments around the world should use the pandemic, and the resulting economic fallout, as an opportunity to reorganize the energy mix and find other jobs for Albertans working in the sector.

“My heart bleeds for people who believe the sector is going to come back. It’s not,” May told reporters Wednesday. “Oil is dead and for people in the sector, it’s very important there be just transition funds.”

Green Party Leader Elizabeth May says “oil is dead” and urges the government to invest into a low carbon economy, including renewable energy, following the COVID-19 pandemic. 1:56

Blanchet agreed with May’s remarks, saying in French that oil is “never coming back.”

“Putting any more money in that business is a very bad idea,” he said.

Asked if he thinks the oil sector should be left to die, NDP Leader Jagmeet Singh was less definitive, saying there will be “tough decisions” to make in the years ahead.

“I know that the future is going to be renewable, that we need to have more investment in sustainable economies that lower our emissions,” he said.

While Prime Minister Justin Trudeau has pushed for a more ‘green’ economy and a carbon tax on emissions, his government has supported some oil and gas development. Finance Minister Bill Morneau arranged the federal government’s purchase of the Trans Mountain project after its U.S. proponent backed out, and has since plowed billions of public dollars into the expansion.

“No country would find 173 billion barrels of oil in the ground and just leave them there,” Trudeau said at a 2017 energy conference in Houston. “The resource will be developed. Our job is to ensure that this is done responsibly, safely and sustainably.”

Trudeau has promised sector-specific support for the oil and gas industry beyond the $1.7 billion his government has allocated to clean up orphan well sites. He repeated that commitment at a press conference Tuesday.

May said governments have managed the ordered shutdown of major industries in the past, citing Quebec’s decision to end the production of asbestos and the collapse of the cod fishery in Newfoundland and Labrador — and the current Liberal government can do it again with Alberta’s oilsands.

“The pandemic, in a very real way, as horrific as this is at many, many levels, gives us an opportunity to stop and think about how we get this economy back on its feet,” May said.

The collapse of the oil and gas sector would be devastating for the Canadian economy, and would have economic effects much greater than the end of asbestos production or the cod fishery.

In 2018, the energy sector made up 10.6 per cent of Canada’s gross domestic product (GDP), with oil and gas accounting for 5.6 per cent of that figure. Oil and gas are the country’s most valuable exports and the industry sent $132.2 billion worth of product to markets abroad in 2018, according to Natural Resources Canada.

The industry supported 530,000 jobs across the country in 2017 and provided roughly $8 billion in annual revenue to governments.

But the International Energy Agency (IEA) has documented a dramatic decline in demand for oil and gas products in the midst of this pandemic, calling it the “biggest shock since the Second World War.”

The IEA said the virus has ravaged markets for fossil fuels — the collapse in energy demand is seven times greater than the slump caused by the global financial crisis. Renewable energy sources, meanwhile, have been comparatively resilient.

“It is still too early to determine the longer-term impacts, but the energy industry that emerges from this crisis will be significantly different from the one that came before,” said Fatih Birol, the IEA executive director.

The IEA’s April oil market report projected global demand for oil this year will fall by 9.3 million barrels per day compared to 2019.

Because of COVID-19 containment measures, demand for oil in April was estimated to be about 29 million barrels per day lower than it was a year ago — a level last seen in 1995, the report said.