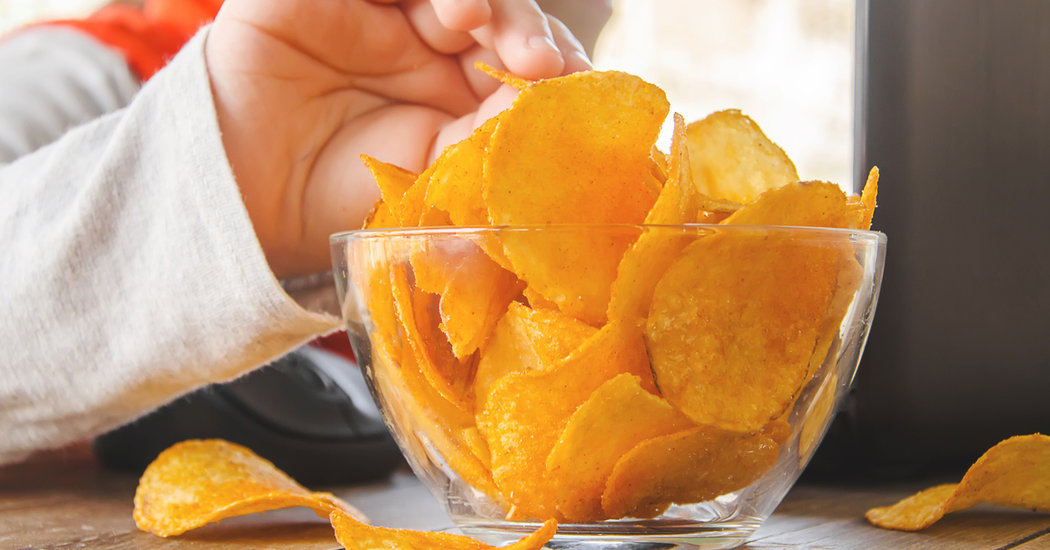 As parents stay home with their children, in a situation of anxiety and uncertainty, the recurring rituals of daily life — eating and sleeping and occupying your time — can be opportunities for comfort and family bonding or fraught expressions of stress, and sometimes both in rapid succession.

Eating together can help a family through, but for many people, both adults and children, the combination of food and stress is already complicated. Bärbel Knäuper, a professor of health psychology at McGill University, pointed to “the interconnectedness of sleep and exercise and structure and mental health,” and the ways that the current situation has affected all those different domains for many families.

“Generally, the two big things that make children emotionally eat are boredom and stress, and we have a lot of that, the children have a lot of that,” right now, she said. Dr. Knäuper said that in the short term, roughly half the population will eat more in response to stress and the other half will eat less — but with longer, sustained stress, a majority tend to eat more.

Emotional eating can mean overeating “in response to negative emotions, anxiety, sadness, anger or boredom,” said Dr. Julie Lumeng, a professor of pediatrics at the University of Michigan who studies children’s eating behavior. Those who study obesity distinguish emotional eating from other motivations that determine how much people eat — such as their reactions to the availability of food, or to satiety.

Dr. Lumeng said that there is much more research on adults than on children when it comes to emotional overeating, though there is increasing interest in how it develops in children. Some studies suggest that there is a genetic contribution to emotional eating, but that it doesn’t really play a major role until adulthood, she said. “Emotional eating in childhood seems to be due to the environment, to parental modeling,” she said.

“Do kids eat in response to stress? Some kids do,” Dr. Lumeng said. But it’s worth looking more closely at what is disturbing them, she said: “When we do think they’re eating more because of the pandemic, is it because they’re emotionally distraught, or anxiety, depression — or that they’re bored? Those are the questions people ask,” she said.

In addition to the disruption of routines, and the combined stress and boredom that the pandemic has brought to so many children, there may be changes in what foods are available — and for children who are creatures of routine, not having their usual foods may be another stress.

So where does this leave parents, home with their children? “If you think your child is emotionally overeating, you would like to help the child manage their emotions better,” Dr. Lumeng said, “help children understand this pandemic, manage their fear, manage their anger over what they’ve lost.” That means, of course, helping children do what many of us are having trouble doing ourselves — a constant issue in parenthood.

Stephanie Manasse, a clinical researcher who specializes in eating disorders and obesity who is an assistant research professor at Drexel University, said, “Children really look to their parents as a model for how to cope with stress.” Children — and teenagers — are around their parents a great deal right now. And they are likely to notice their parents’ eating and exercise habits.

That doesn’t mean that parents should be pretending that there is no stress. “Another thing to model is that there is not necessarily a perfect way to deal with this,” Dr. Manasse said. Instead of “modeling perfection,” what you can model is emotional communication, she said, acknowledging the stress and anxiety, coping with staying inside: “It’s OK to have anxiety, it’s OK to be stressed out, to have all these different feelings, but they don’t have to determine my behavior.”

Rely on routines, Dr. Lumeng advised, with meals and snacks at scheduled times. Schedule one or two snacks a day, depending on the child’s age — and for young children it may help to follow the routines they knew in day care.

Boredom can be an important factor. But as we all know, the remedy for boredom is activity, structure, engagement, and this is a hard demand to place on parents who are already under plenty of stress, working from home, worrying about job loss, supervising online classes, keeping children entertained.

Dr. Knäuper said she was reluctant to add any additional stress to what parents are already going through by saying they need to create additional structure for their children, recognizing how much parents are already being asked to do. “I would be very gentle in pointing this out,” she said. “Just aim for some kind of structure, not to go totally wild in terms of getting up at 2 in the afternoon.”

As someone who treats both people struggling with being overweight and those who have eating disorders, Dr. Manasse pointed out that some people with eating disorders are finding it really hard to manage during these stressful times. For some teenagers who are worried about gaining weight, she said, because they are home, unable to pursue a normal level of activity, and surrounded by food, restricting their eating may seem like a way to feel more in control.

And in turn, since parents are home with their children, they may have a clearer window into their children’s eating habits, and may notice problems they weren’t aware of, whether secretive eating in a child’s room, or a child eating much less and avoiding mealtimes, or spending a lot of time in the bathroom and possibly purging. If parents are worried that a child may have an eating disorder, Dr. Manasse suggested looking to eating disorder centers for help via telehealth.

At the same time, she said, being home in that environment where food is available all the time can be very difficult in a different way for people who have been trying hard to follow healthy eating plans and manage their weight.

“People are having very, very different responses to this, with some people actually finding it helpful to their eating, being at home, being a little bit more wary of shopping, trying not to go through their food as quickly — but others are finding it very, very disruptive,” Dr. Manasse said.

Parents don’t have to hide these tensions from their children; Dr. Manasse suggested that parents talk with teenagers about how they are managing their own eating, but also encourage them to get creative with social interactions and stay in touch with their peer groups, for the general good of their mental health

So yes, try for basic routines, and be aware of the importance of modeling — it may help you keep yourself a little healthier as well, for your own sake and your children’s. Dr. Knäuper spoke of “gently asking the parents to reflect upon their own eating right now and how it has changed.”

But don’t be too hard on yourself, and don’t expect too much. “With all the things that have been disrupted in a child’s life, give them their milk, their mac and cheese,” Dr. Lumeng said. “Maybe right now is not the time to get them to expand their dietary repertoire to eat brussels sprouts.”