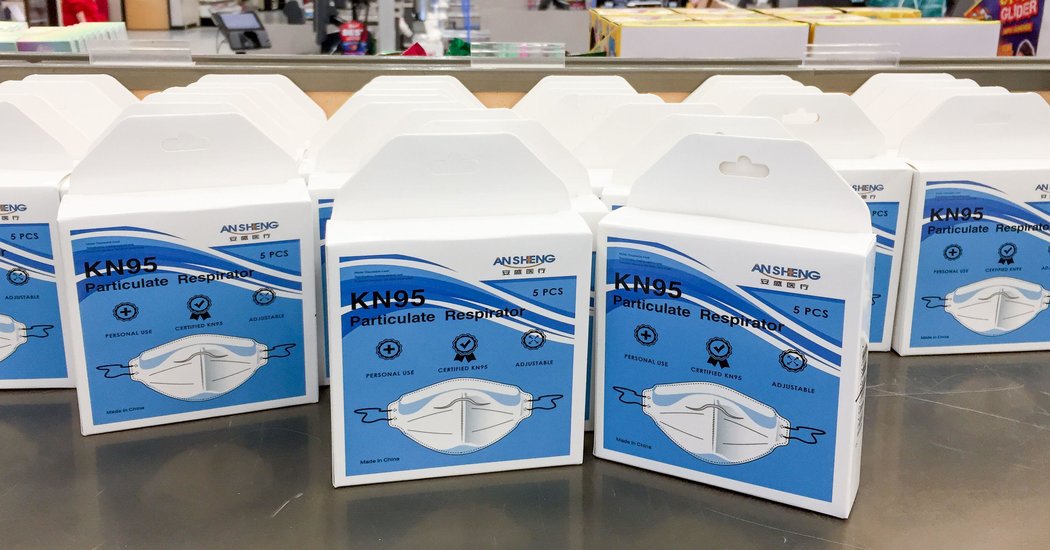 For three weeks the Food and Drug Administration allowed the sale of several types of N95-style face masks for American health care workers despite evidence from other parts of the federal government that the masks were not effective for blocking the coronavirus.

Millions of these masks, produced in China, have been bought by or donated to American hospitals and distributed to others on the front line of the Covid-19 outbreak. Starting in mid-April, tests conducted by the Centers for Disease Control and Prevention revealed that some of the products did not meet medical standards for protection against the coronavirus.

But it wasn’t until Thursday that the F.D.A. barred more than 65 of the 80 authorized manufacturers in China from exporting N95-style face masks to the United States for medical use, citing poor quality.

“While the F.D.A. continues to take action to balance the urgent need of supplies of respirators for health care personnel, we are also doing everything in our authority to ensure health care personnel receive adequate protection,” an F.D.A. spokeswoman said in a statement. She added that the agency would collaborate with the C.D.C. to increase the supply of masks and ensure their integrity.

She did not comment on the delay between the failed tests and the F.D.A.’s action.

N95 masks, many of which are also produced in China, provide better protection against coronavirus particles than cloth or surgical masks, and are coveted by health care providers and emergency medical workers. On April 3, drastic shortages of the N95 masks led the F.D.A. to allow imports of similar masks, also from China. Millions of them have been imported.

These masks, known as KN95, were never tested by American regulators, but were required to be vetted by an accredited test laboratory, which can be outside the United States, showing that they met the standards of the C.D.C. Those standards call for filtering 95 percent of particles that are 0.3 microns or larger, including the new coronavirus.

As an additional safeguard, the C.D.C. and the F.D.A. initiated their own review to make sure the masks met these performance standards. On Thursday, the F.D.A. said that too many of them failed to filter out a sufficient percentage of particles.

In tests of about 11 masks that the F.D.A. had authorized to be sold to American hospitals, seven flunked. One mask removed as little as 24 to 35 percent of particles, according to a C.D.C. test on April 15. Others just barely missed the cut, such as masks from DaddyBaby, a company in Fuzhou, China, that typically makes diapers. Those masks removed between 91 percent and 93.5 percent of particles.

The health agencies also tested some KN95 masks that did not have agency approval. One of these, the F.D.A. said, blocked roughly 1 percent of the particles. While the C.D.C. tested only about 10 masks that had been allowed, the F.D.A. removed all other masks from its list that hadn’t yet been tested and gave their manufacturers 45 days to get tests in order to be reinstated.

Many of the tests were conducted weeks ago, according to C.D.C. documents, yet the F.D.A. didn’t remove the masks until Thursday. It was unclear why there was such a delay. It was also unclear how many of the faulty masks were sold to American health care workers, where they ended up and whether the U.S. government was tracking that number. An F.D.A. spokeswoman didn’t immediately respond to questions on the issue.

Hospitals and health care workers have been wary of KN95 masks, but because of the shortage of official N95 masks, many have ended up with them anyhow.

Last month, the New England Patriots football team used its plane to transport roughly one million masks from China to Massachusetts, drawing positive headlines even from the New York newspapers. A week later, medical workers began expressing concerns that the masks that Massachusetts officials purchased were not the top-of-the-line N95 respirators, but rather lower-grade KN95 masks that were potentially not safe to use while caring for coronavirus patients.

“We are not using these on Covid 19 patient areas or in any areas,” Michael Augustine, the supply chain director at Harrington Memorial Hospital in Southbridge, Mass., said in an email at the time. “The packaging on the masks state they are not to be used in medical and surgical environments. These are essentially parked in storage and will not be utilized.”

Jay Park, an emergency-medicine doctor in New York who has been vetting mask suppliers for nonprofits, said that the F.D.A.’s reaction to the test results showed the agency hadn’t properly screened the masks before approving them for medical use. “They relied on the self-reported test results from China,” he said. “Are you kidding me?”