You Are Here Home Health News Find a Vaccine. Next: Produce 300 Million Vials of It. 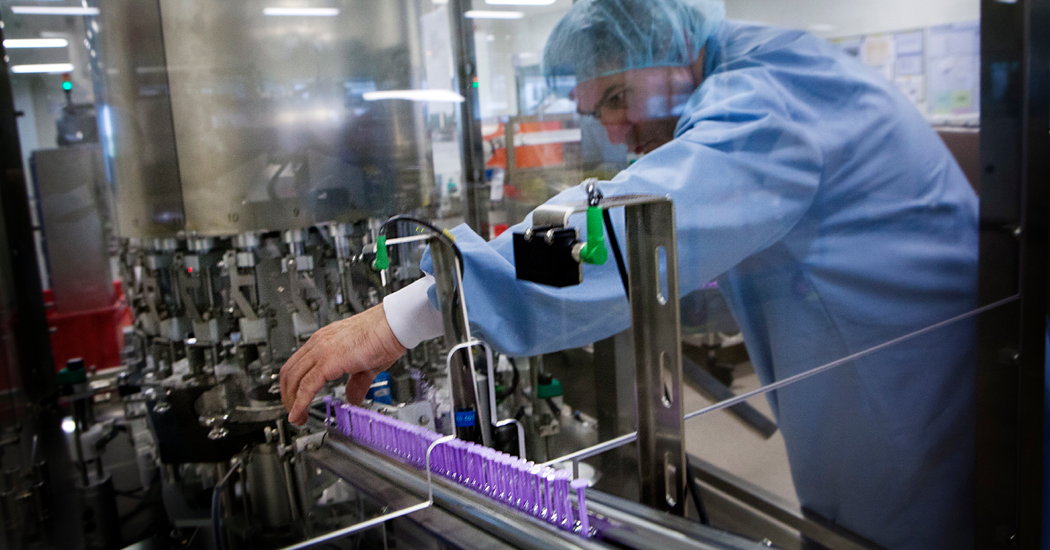 In the midst of national shortages of testing swabs and protective gear, some medical suppliers and health policy experts are looking ahead to another extraordinary demand on manufacturing: Delivering a vaccine that could potentially end the pandemic.

Making a vaccine is not easy. More than two dozen companies have announced programs to develop a vaccine against the coronavirus, but it may still take a year or more before one passes federal safety and efficacy tests in humans and becomes available to the public.

Here in the United States, more than 300 million people may need to be inoculated. That means at least as many vials and syringes — or double that amount, if two shots are required. To meet that demand, companies will have to ramp up manufacturing; products that doctors give little thought to now could easily become obstacles to vaccine delivery in the future.

“We’re thinking about the vaccine, but what if the vials it is stored in, or rubber stoppers in the vial or the plungers in the syringes become the constraint?” said Prashant Yadav, who studies health care supply chains at the Center for Global Development in Washington, D.C.

Timing the orders of medical products like syringes and all the raw materials required to make them will be essential. Medical device manufacturers could increase inventory or find alternative supply chains for products that are running low, but everything will need to be systematically planned. Adding the capacity to make millions more syringes could take a manufacturer as long as 18 months to complete such a large order, for example.

“The Covid-19 pandemic is creating industrywide challenges, including expected delays in inventory replenishment for certain products,” said Lucy Bradlow, a spokeswoman for Cardinal Health, a manufacturer that makes vials and syringes as well as other medical supplies.

Several manufacturers worry that the Trump administration may be waiting too long before ordering for an ample supply of medical equipment needed to deliver a vaccine. One manufacturer said they had recently received an order for syringes, but were concerned that the Biomedical Advanced Research and Development Authority, a branch of the Health and Human Services Department built to help with pandemic preparedness, was still soliciting too few supplies for nationwide vaccine delivery.

Elleen Kane, a spokeswoman for the H.H.S., said the department has been “working daily with our manufacturers to secure those supplies and assist them with any anticipated obstacles in their supply chains.”

In March, the H.H.S. set up a public-private partnership to find drug packaging solutions that were based in the United States. It could be adapted for future therapeutic or vaccine delivery for the Strategic National Stockpile, a federal cache of supplies and medicines held in case of emergencies.

The White House is also developing a plan, called Operation Warp Speed, to accelerate vaccine production and try to get manufacturing capacity set up in advance of a vaccine approval. But some experts say that it is unclear whether the plan will apply to vaccine delivery devices like syringes and details are still scarce about which federal agency would be responsible.

Earlier in April, New Hampshire’s senators, Jeanne Shaheen and Maggie Hassan, sent a letter addressed to Vice President Mike Pence, urging him “to ensure that the federal government obtains the materials to meet the demand for a vaccine when it becomes available.”

Of course, a lot will depend on the type of vaccine and when it is approved. A variety of RNA- and DNA-based vaccines are currently undergoing clinical trials, as well as more traditional types, which are made by placing instructions for coronavirus spike proteins inside a different dead or harmless virus.

RNA or DNA vaccines might have different storage and refrigeration requirements because the technology has never been used for an approved vaccine before. The final vaccine might be packaged in ready-to-use glass syringes, which are commonly used in flu campaigns in Europe, or in a single-dose or multi-dose vials that would be administered with disposable plastic syringes, which are standard for many vaccines in the United States.

The amount of vaccine manufactured by a company could also affect the number of delivery systems needed, said Michael Gusmano, a health policy expert at the Hastings Center and Rutgers School of Public Health. It is unlikely that a pharmaceutical company will be able to match demand immediately — nationally or internationally.

“The good news is we have time,” Dr. Gusmano said. Medical device manufacturers could slowly scale up vials and syringes as a vaccine becomes more widely available.

Early estimates of the coronavirus’s infectiousness suggest that at least 70 percent of the population will need to be immunized to reach what experts call herd immunity, when enough people are immune to a disease that they can also indirectly protect others who are not immune.

“That’s a remarkably high number, and I don’t think we’re anywhere close to that just with people who have been exposed to the virus and developed antibodies,” Dr. Gusmano said. “So you’re talking about a fairly massive vaccination campaign.”

Preliminary surveys in California and New York suggest that anywhere between 4 to 21 percent of people have developed antibodies to the coronavirus. But the accuracy of many antibody tests have been called into question. And it is still unclear whether having some of these antibodies provides effective and long-lasting immunity against the coronavirus. Plus, most vaccination campaigns aim to immunize a high proportion of the population — around 90 percent — to successfully prevent transmission of disease.

To produce the number of vials and syringes needed for a coronavirus vaccine, medical suppliers will need to increase manufacturing shifts and overtime for their employees, as well as collaborate with U.S. and foreign trade authorities to expedite shipments and shorten lead times.

A handful of manufacturers are based in the U.S., but many still have to import the glass tubing for vials, polypropylene for syringes and rubber or silicone for small parts like the stoppers and plungers in these devices. Becton Dickinson & Company, one of the world’s largest manufacturers of needles and syringes, said it made nearly all components of its needles and syringes in-house in the United States. Other companies may source from their factories and partners located largely in China and India, where lockdowns and export bans have already decreased production and exports.

Although syringe manufacturing is mostly automated, with parts like the barrel and plunger made from a mold and put together on an assembly line, Dr. Yadav said manufacturers in India had told him fewer employees were able to work than needed for full capacity.

At least 69 countries have also banned or restricted the export of medical devices, medicines and protective equipment, according to the Global Trade Alert project at the University of St. Gallen in Switzerland, because of their own needs during the pandemic. Manufacturers of medical syringes may have to find new supply channels, including partnerships with glass and plastic manufacturers that operate outside of the health care industry.

Some lawmakers are concerned that without more federal coordination, individual companies will not have the capacity to match vaccine delivery to the overwhelming demand.

“The Trump administration needs to prepare our domestic supply chain now for the delivery of an eventual vaccine that will need to be delivered to the entire country,” Senator Shaheen said. “It’s vital that federal agencies exercise better foresight so that we don’t see supply shortages like we continue to experience for testing and protective equipment.”