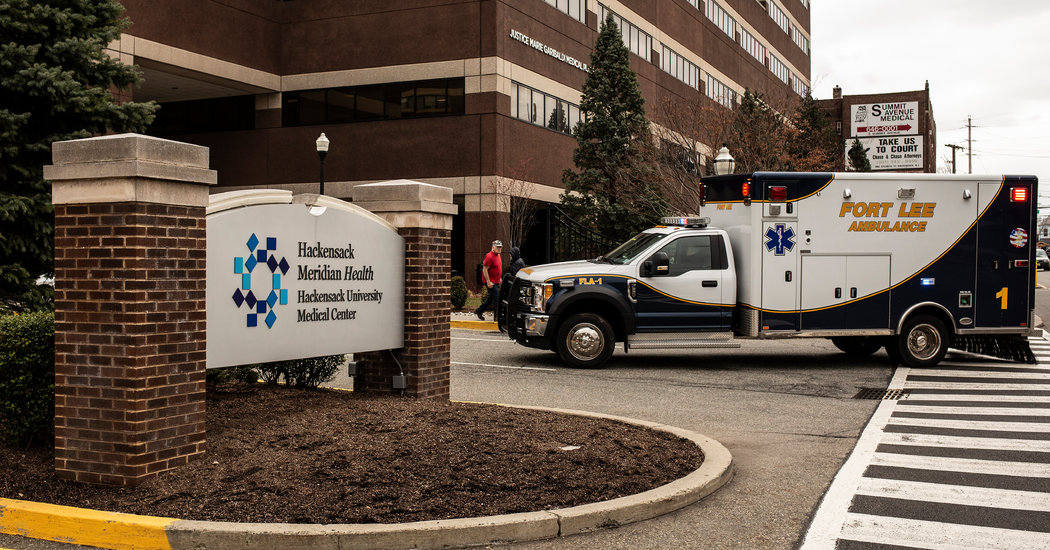 A New Jersey man who worked at a racetrack just north of New York City died on Tuesday after contracting the coronavirus — the first known fatality in the Northeast linked to the virus.

Yonkers Raceway, the popular harness-racing track, shut down Tuesday afternoon and has asked employees who spent time near the horse paddock to remain under quarantine.

The man, who was 69 and lived in Little Ferry, a small Bergen County town about 15 miles northwest of Manhattan, had gone to his doctor last week complaining of a fever and a cough, the state’s health commissioner, Judith Persichilli, said.

The man, identified by a close friend and an official at Yonkers Raceway as John Brennan, was treated with antibiotics and Tamiflu, an antiviral medication given to alleviate flu symptoms, but did not improve.

He was admitted to Hackensack University Medical Center on Friday with a history of serious health problems, including diabetes, high blood pressure and emphysema, Ms. Persichilli said.

Mr. Brennan, a nighttime field representative for the owners association, had constant contact with drivers, trainers and owners, and would often hold court in his small office near the racetrack and paddock, said Joe Faraldo, president of the Standardbred Owners Association of New York and his friend for 35 years.

“He was in charge of making sure that those horses were well cared for in the paddock,” said Mr. Faraldo, who called his friend “a mensch.”

“If somebody was sick, he’d call them up three times a day,” he said. “He didn’t miss anybody’s birthday. He was just a good guy.”

“He wasn’t coughing or anything else,” he said. “The next morning he called me and said, ‘I don’t feel well.’”

Mr. Faraldo, 74, said he is battling a fever and has seen a doctor, but has not yet been tested for coronavirus.

The two men spoke regularly while Mr. Brennan was hospitalized — the last time about 9:40 p.m. on Monday, Mr. Faraldo said.

“He was annoyed that they didn’t have the test results yet,” Mr. Faraldo said.

He had been tested for coronavirus on Saturday, but the results did not come back until Tuesday, Ms. Persichilli said.

He went into cardiac arrest on Monday night, but was revived, Ms. Persichilli said. On Tuesday morning, Mr. Brennan had a second heart attack, this one fatal.

Mr. Brennan, who was single and had no children, regularly traveled into New York City after leaving work, Mr. Faraldo said. The racetrack is just north of the city in Yonkers, N.Y., a city that borders New Rochelle, where there is a cluster of coronavirus cases.

On Tuesday, New York State officials created a one-mile radius zone in New Rochelle, where schools and other buildings will be forced to close and the National Guard will be deployed. There were 108 patients with the virus in Westchester on Tuesday — most of them in New Rochelle, Gov. Andrew M. Cuomo said.

A statement by MGM Resorts International, which owns the track and the nearby Empire City Casino, said it had enhanced its “cleaning procedures and protocols.”

“We will continue to coordinate with and follow the guidance of health officials and support them in their response and prevention efforts,” the statement said.

Fourteen other New Jersey residents had tested positive for the coronavirus as of Tuesday morning. Another 31 people remained under investigation for the virus, and 20 tests were being processed, state health officials said.

Six of the 15 people to test positive have been from Bergen County, the state’s most populous county, which sits across the Hudson River from New York. At least two cases there have been linked to an outbreak of the virus in New Rochelle, N.Y.

Bergen County Technical Schools, which enroll students from throughout the sprawling county, will close on Wednesday through next week, officials said. The county’s community college will remain closed through March 22.

“We are going to get through this,” said the mayor of Little Ferry, Mauro D. Raguseo. “We are a resilient town.”

Because Mr. Brennan’s positive test was returned on Tuesday, county health officials said they had only just begun to collect information about his travel patterns and family contacts, and had not determined how he might have become infected with the virus.

Across the country, at least 802 people in 36 states and Washington, D.C., have tested positive for coronavirus as of Tuesday afternoon, according to a New York Times database, and at least 27 patients with the virus have died.

Two people have died from coronavirus in Florida, but Mr. Brennan is believed to be the first death in the Northeast.

At least 10 counties in New Jersey have cases under investigation, including Sussex, the state’s northernmost county, Camden, which is east of Philadelphia, and Burlington, the state’s largest county that stretches across the state from east to west.

Still, Ms. Persichilli said there is no indication of “community spread.”

“You may have more cases,” Ms. Persichilli said, “but it might not necessarily qualify as community spread.”

Gov. Philip D. Murphy on Monday declared a state of emergency to ramp up efforts to limit the spread of the virus. And on Tuesday, he announced that patients covered by state insurance plans would not be responsible for co-payments associated with coronavirus testing in emergency rooms, urgent care centers or doctors’ offices. The state is also encouraging insurance plans offered by private companies to waive co-payments for coronavirus testing.

“We remain vigilant to doing all we can — across all levels of government — to protect the people of New Jersey,” Mr. Murphy and Sheila Y. Oliver, the lieutenant governor, said in a joint statement.

At least two of New Jersey’s cases have been linked to the New Rochelle cluster, including a 55-year-old man from Englewood who has the virus and attended a conservative conference last week in Washington, D.C., where President Trump and Vice President Mike Pence spoke.

The state’s epidemiologist, Dr. Christina Tan, said Tuesday she expects that more than two cases will ultimately be linked to the New Rochelle cluster.