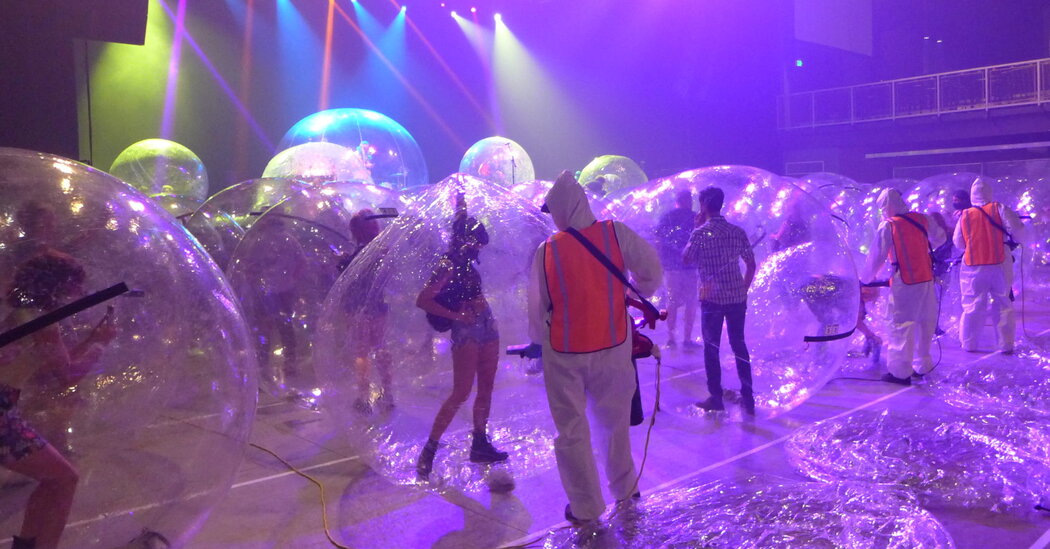 There are Covid-19 bubbles — small clusters of friends or family who agree to socialize exclusively with each other during the pandemic — and then there are the kinds of bubbles the Flaming Lips used at recent concerts.

Band members and concertgoers rocked out and bounced while encased in large individual plastic bubbles amid bright swirling lights in trippy scenes at concerts on Friday and Saturday in Oklahoma City.

The band has taken the elaborate precautions at its live performances to protect against the transmission of the coronavirus, but some health experts were unsure about the effectiveness of those measures.

“I’d need to see how the air exchange was occurring between the outside and the inside of the bubbles to be able to say if it were safe over all or reduced risk of transmission,” said Dr. Eric Cioe-Peña, director of global health at Northwell Health in New Hyde Park, N.Y.

The Flaming Lips, a psych-rock band founded in the early 1980s and known for their exuberant live shows and recording experiments, had a similar concert in October, and also had performed their song “Race for the Prize” in June using the spheres on “The Late Show with Stephen Colbert.”

The concerts held on Friday and Saturday were originally scheduled for December, but the band postponed them because of rising Covid-19 cases in the Oklahoma City metro area.

“It’s a very restricted, weird event,” the band’s frontman, Wayne Coyne, told Rolling Stone last month. “But the weirdness is so we can enjoy a concert before putting our families and everybody at risk.”

Nathan Poppe, a videographer and photographer documenting the show for the band, said on Twitter that the floor was set up in a grid of 10 bubbles by 10 bubbles. “Each bubble may contain one person or two or maybe three,” he said.

Photos showed fans climbing inside the spheres on the concert floor, where the bubbles were then inflated with leaf blowers.

Each bubble came equipped with a high-frequency speaker, water bottle, fan, towel and a sign if someone had to use the restroom or if it was too hot inside. If it got too stuffy inside, the bubble could be refilled with cool air, Mr. Poppe said.

He said concertgoers could take their masks off inside the bubble but had to wear them after leaving the bubble.

“You roll your bubble to the exit and unzip it at the door,” he said.

It was not immediately clear what became of the used bubbles after the 90-minute performances, which were attended by about 200 people each.

Some health experts had concerns about users’ safety inside the bubbles.

“There is no evidence about the efficacy — or lack thereof — of these bubbles from an infectious disease transmission point of view,” said Dr. Sandro Galea, dean of the Boston University School of Public Health.

He said that virus transmission control depends on good air circulation and filtration.

“So, in theory, if air filtration is good, protective barriers can helpfully augment and reduce risk of transmission, but I would be hesitant to attend a concert in a bubble at the moment unless this has been assessed further,” he said.

Dr. Cioe-Peña said the plastic bubbles used at the concerts seemed to be unventilated. But if each of the bubbles “had a bidirectionally filtered air supply,” he said, “this would effectively prevent Covid transmission between bubbles.”

At least 48 new Covid-19 deaths and 2,941 new cases were reported in Oklahoma on Sunday, according to a New York Times database.