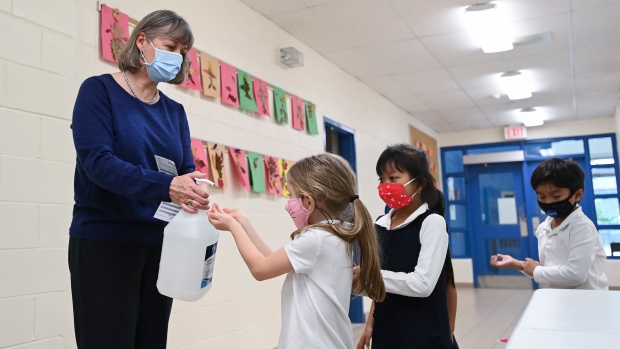 TORONTO — Children who have received a seasonal flu shot may be less likely to suffer COVID-19 symptoms if infected, according to a new American study.

The study, conducted by researchers out of the University of Missouri School of Medicine, looked at 905 children diagnosed with COVID-19 and found that those who received the influenza vaccine in the current flu season had lower odds of experiencing symptoms.

The findings were published Thursday in peer-reviewed medical journal Cureus.

Study author and University of Missouri professor Anjali Patwardhan said in a press release that it is “known that growth of one virus can be inhibited by a previous viral infection.”

“This phenomenon is called virus interference, and it can occur even when the first virus invader is an inactivated virus, such as the case with the flu vaccine,” Patwardhan explained.

Researchers reviewed the records of American pediatric patients under the age of 20 diagnosed with COVID-19 between February and August 2020 to determine each patient’s influenza vaccination history. The study only looked at those who received the influenza vaccine between September 2019 and April 2020, and researchers say previous flu vaccinations were not taken into consideration.

Not only were the children who received the influenza vaccine at less risk of experiencing symptoms, the study discovered that they also had less of a chance of developing respiratory problems or severe disease.

Researchers also found that Black children had smaller odds than other children to exhibit COVID-19 symptoms, and were less likely to be symptomatic despite “comparatively higher” positive test rates.

While children have been known to show limited to no COVID-19 symptoms, Patwardhan says studying the pediatric population remains critical as children “play a significant role in influencing viral transmission.”

“Understanding the relationship and co-existence of other viruses alongside COVID-19 and knowing the vaccination status of the pediatric patient may help in deploying the right strategies to get the best outcomes,” Patwardhan said in the release.

Given the study’s results, Patwardhan said it is important to further explore the connection between seasonal vaccines and COVID-19 symptoms in a “larger, geographical-multiracial study.”

“Based on these findings, we hypothesize that the higher incidence of COVID-19 in minority populations may also reflect their low vaccination rate apart from other health inequalities,” Patwardhan said.

Researchers also noted that it will be interesting to see if changes in influenza infection rate occur in the current flu season due to coronavirus-related viral interference in the future.

According to the study, the U.S. Centers for Disease Control’s influenza surveillance system has reported an “unusually low” influenza infection incidence this year. Public Health Agency of Canada previously reported that is has found “no evidence of community circulation of influenza,” this season, despite heightened testing levels.