You Are Here Home Health News For 4 Days, the Hospital Thought He Had Just Pneumonia. It Was Coronavirus. 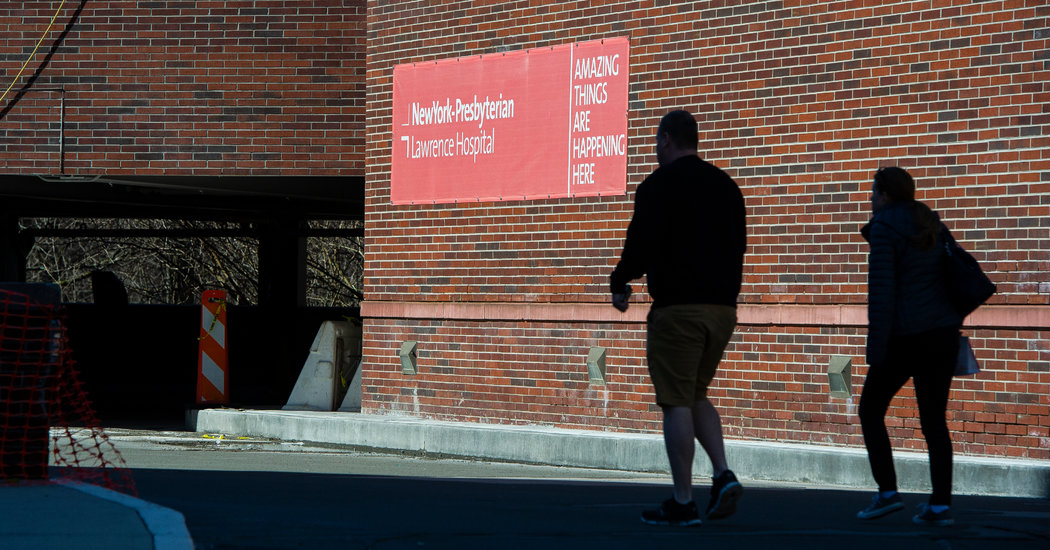 The lawyer, 50, was struggling to breathe. His neighbor took him to a nearby hospital, in an affluent suburb about 20 miles north of Midtown Manhattan. He seemed to have just pneumonia. Doctors put him in an ordinary room on the fifth floor.

It would be more than four days before anyone figured out what actually ailed him: the new coronavirus. The discovery on March 2 that the man, Lawrence Garbuz, was infected was the first indication that the virus was circulating in New York through community spread.

Within days, it would emerge that Mr. Garbuz — who is from New Rochelle, N.Y., and had not traveled to one of the known hubs in the world for the illness — was part of a cluster of more than 90 cases, the largest concentration on the East Coast. For many New Yorkers, his case was the moment they learned that the coronavirus was already here.

But the larger realization came as state and city health investigators untangled Mr. Garbuz’s case by retracing his steps and interviewing those he came in contact with. Soon, these investigators would discover how just one undiagnosed case can wreak havoc on a hospital and spread anxiety across a region.

Over his four days at NewYork-Presbyterian Lawrence Hospital in Bronxville, N.Y., Mr. Garbuz came in contact with dozens of doctors and nurses, the workers who brought his food and cleaned his room, the porters who helped move him around and the respiratory technicians who made sure his ventilator was working. And other patients, too.

At least eight workers have been tested, and one was confirmed to have the virus, the authorities said last week. Many more, including doctors, are in quarantine, although the hospital would not specify a number.

“Those employees and other caregivers who cared for the patient have been identified, and follow-up steps — isolation, monitoring and testing as needed — are underway,” Kate Spaziani, a spokeswoman for the hospital system, said.

In New York City, the authorities have sought to assure the public that the health care system can absorb an influx of coronavirus patients with the 1,200 hospital beds that are available. But hospitals may face another shortage: health care workers who have become sick or are put in quarantine after exposure to coronavirus patients.

Patricia Edmund-Sealey, an organizer for 1199 S.E.I.U., the union that represents nurse’s assistants, phlebotomists and many other staff members at Lawrence Hospital, said many workers there were concerned that they had been exposed to the coronavirus. “Many of them had contact with the patient or the patient’s family,” she said.

She described the episode as a preview of what may happen in New York State, where more than 170 cases had been confirmed as of Tuesday afternoon.

“You can think of the trickle effect that will have, how that will impact care,” Ms. Edmund-Sealey said. “That’s what will happen now that we’re in crisis.”

This article is based on interviews with several people who work at Lawrence and came into contact with Mr. Garbuz during his stay there. (He was later transferred to a hospital in Manhattan, where he remained on Tuesday.) It will be some time before public health officials determine how many people at the hospital end up being infected.

Regardless, better understanding of what happened over Mr. Garbuz’s four days at Lawrence, which has about 290 beds, could help other hospitals more quickly make diagnoses in the future. It could provide insight into how hospitals might limit the number of people exposed to each patient. In the larger picture, it may help contain the spread of an outbreak.

“He is a very caring hardworking person who constantly cares for his clients and those around him over himself,” Adina Lewis Garbuz, Mr. Garbuz’s wife, said about him on Facebook. Both of them work at a law firm in Manhattan. “I think it is from this that he was run down and susceptible to the illness he acquired. So, I ask all of us who are running on the hamster wheel of life, particularly us New Yorkers, to learn from this and take a moment to take care of yourself.”

An X-ray taken shortly after Mr. Garbuz arrived at Lawrence on Feb. 27 seemed to show he had pneumonia. He was taken to a room on the hospital’s fifth floor, but then was moved to another room. At first, he was walking on his own. But as his breathing troubles worsened, he told hospital workers that he could no longer walk. He was given a wheelchair.

With his health deteriorating, he was moved again, this time to the critical care unit on the third floor. Each of these moves brought him into contact with more staff members and patients.

“It’s a whole bunch of people that have been exposed,” said one hospital employee, who was asked to self-quarantine because of contact with Mr. Garbuz.

The worker said that had Mr. Garbuz been recognized as a coronavirus patient, he would have been placed in isolation. Health care workers would have entered his room only while wearing protective gear.

“He should have been in a negative-pressure isolation room,” the worker said, referring to rooms that are kept at a slightly lower pressure to prevent airborne pathogens from escaping. But as far as the hospital staff knew, the worker said, “he was just a regular patient, a regular guy who came in.”

Over the past few months, as the coronavirus spread to more than 100 other countries, infecting more than 116,000 people, hospitals in New York trained some staff members on how to effectively use protective gear and safely treat patients with the illness. But all these procedures assumed that the workers would be able to quickly determine which patients might be infected.

“We’re always watching the front door and everyone is looking for that patient with fever and cough or travel, but how else could it come in?” Michael Phillips, the chief epidemiologist for the N.Y.U. Langone Health System, said in a recent interview. “I bet you the breaches happen when patients are not recognized immediately.”

He said some past outbreaks, like SARS in 2003, were driven by transmission in hospitals. “They’ve come from the unrecognized patient, deep in the hospital,” he said.

Howard Markel, a professor of the history of medicine at the University of Michigan and an author of books on epidemics, said doctors and nurses must consider patients with undiagnosed illnesses who were coughing and complaining of respiratory symptoms as possible coronavirus patients.

“I think you have to suspect this disease until proven otherwise,” he said, referring to Covid-19, the illness caused by the coronavirus.

Over the weekend of Feb. 29, Mr. Garbuz had visitors, mainly family members, at Lawrence Hospital. Two people who were in his room at various points recalled perhaps a dozen or so visitors, though they acknowledged that they may have double-counted people who made multiple visits.

But at least three members of the Garbuz family now have the coronavirus. So does the neighbor who drove him to the hospital, which has worried the valet attendants who park cars there.

“It is possible that we might have parked the car of the patient,” said Nilo Ismael Ramon, a valet-parking worker.

During that weekend, Mr. Garbuz’s health worsened. He began to grow panicky as he struggled to breathe. An X-ray showed his lungs to be in poor shape — “full of cobwebs” is how a person described the image — and much worse than they had been just days earlier. But if any of the doctors treating Mr. Garbuz suspected the coronavirus, they do not appear to have acted on it, several members of the hospital staff said in interviews.

“To the doctors there, his travel and exposure history did not seem to indicate the likelihood of exposure to coronavirus,” said a health care provider with direct knowledge of the case.

By March 1, Mr. Garbuz was intubated and put on a ventilator to help him breathe. Intubation, which involves inserting a plastic tube into a patient’s windpipe, can lead to the virus becoming aerosolized, and more infectious to health care workers in the room, experts say.

During earlier outbreaks of other coronaviruses, including SARS, a lot of transmission occurred in hospitals “during procedures like intubation,” said Stephen Morse, a professor of epidemiology at the Mailman School of Public Health at Columbia University.

A spokeswoman for NewYork-Presbyterian Hospital, which owns Lawrence Hospital, declined to say whether staff members in the room at the time were wearing protective gear such as N95 respirator face masks, which offer more protection against the new coronavirus than surgical masks.

But even with the treatment, Mr. Garbuz’s condition was not improving. Doctors decided to transfer him to NewYork-Presbyterian/Columbia University Medical Center in Manhattan.

Without any special precautions, he was loaded into an ambulance on Sunday night and driven into the borough. Two days later, Gov. Andrew M. Cuomo announced that a man from Westchester County who had stayed at Lawrence Hospital had tested positive for the coronavirus.