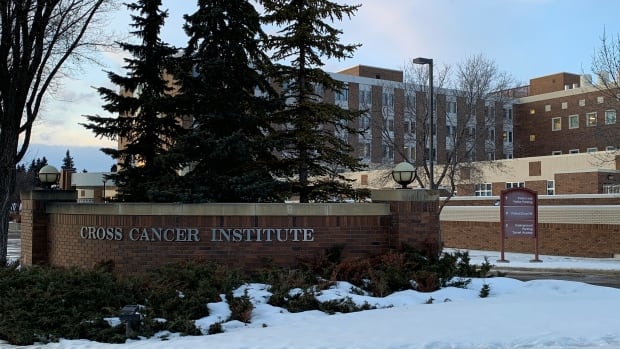 Documents show frustration at an Edmonton cancer centre due to its exclusion from Alberta’s first phase of vaccinations.

Memos obtained by CBC News detail the unsuccessful efforts from leadership at the Cross Cancer Institute to have Alberta Health Services make its health-care workers eligible for immunization during Phase 1. The treatment and research centre provides a range of services for cancer patients in Edmonton and throughout northern Alberta.

“I am sure that many of you will be as frustrated as I am with this decision,” he said in the email.

“It is taken from the perspective of acute care hospitals and ignores the critical nature of the CCI in delivery of cancer care for the northern half of the province.”

Patients at the institute are a vulnerable population, Butts said, in an earlier memo to AHS, and are immunocompromised due to their sickness and treatment. The institute provides acute care for the majority of cancer patients needing inpatient care for Edmonton and much of northern Alberta with 56 beds, he said.

“Given the critical nature of cancer care and the limited supply of trained oncology providers, all means to reduce the risk to this critical service must be employed.”

Staff at CCI were left in the dark about the vaccine sequencing discussions, according to a physician at the institute who spoke on condition of anonymity.

“There’s no transparency and it’s completely confusing as to what they’re doing,” the physician said. “A lot of people were angry.

“A lot of people were very resentful. They felt that the work they were doing wasn’t valued, that the patients that we cared for were given short shrift because the cancer program wasn’t felt to be valuable at all.”

Morale at the institute following the decision has been “absolutely terrible,” the physician added.

“What we feel has been cogent arguments made as to why we should be included have been completely dismissed. It feels as though they’re just doubling down because no one wants to admit that they’ve made an error,” the physician said.

“We feel as though Alberta Health Services has completely abandoned us. And specifically in Edmonton, there is a sense of complete and utter distrust, disgust as well.”

The final decision came after nearly 150 staff at the institute had already received a vaccine dose, according to a memo from AHS vice president and medical director for northern Alberta Dr. Mark Joffe.

He said inpatient units at the institute initially included within the eligible category should not have been.

“It was recognized within a few days that the CCI inpatient units had been misclassified, but not before 172 emails were sent to CCI staff inviting them to get vaccinated,” Joffe said. “Over 140 of them, as well as 5 oncologists, have accessed vaccine.”

In a letter dated Jan. 27 to Dr. Verna Yiu, CEO of Alberta Health Services, Butts asks for an explanation why health-care workers at the CCI were being excluded from the first phase of vaccinations while other employees at AHS cancer facilities were not.

“This would not be a difficult undertaking,” Butts said in the letter, noting there are less than 1,000 staff at the institute. “With the resources AHS has in place, vaccinating the entire staff would take less than a day once vaccine supply is restored.”

A COVID-19 outbreak on one of the wards over the holidays was only just recently declared over, Butts said.

In a response dated Feb. 4, Joffe said the matter had received considerable attention and a final decision was reached that day.

“You are well aware that the basic challenge we face is one of insufficient vaccine,” Joffe wrote, outlining the basic principles for the distribution strategy to focus on reducing acute care and demand, protecting critical workforce difficult to recruit and replace, enhancing the flow of patients through the system and preventing outbreaks.

COVID units and medical/surgical units were included in Phase 1 as they would routinely house COVID-19 patients or become COVID units as numbers surged, Joffe said.

The CCI’s stand-alone nature meant it would never be considered for COVID-19 overflow, he said. The vaccine sequencing group also reviewed oncologists listed at the institute but determined they did not meet the requirements of Phase 1 due to the understanding that it was primarily an outpatient facility without units for the purpose of COVID planning.

Joffe said oncologists from the Tom Baker Cancer Institute were included for vaccination because they provide inpatient care to patients on units at the Foothills Medical Centre in Calgary that routinely admit COVID-19 patients and may be designated to function as COVID units.

“I appreciate that this is difficult for you, and those you represent at the CCI,” Joffe said in the letter addressed to Butts.

“I can assure you it is equally difficult for all of us involved in vaccine sequencing and decision-making, as we want all of our staff and physicians vaccinated.”

The nature of the work and patient population of CCI and Calgary’s Tom Baker Cancer Institute is identical, the physician said.

“It’s pan-province work and it’s a provincial cancer agency. Why are we not being treated equitably?” the physician said.

Other jurisdictions around the world and in Canada have recognized “the merits of ensuring that a cancer patient population has that bubble around them,” they added.

Alberta Health spokesperson Tom McMillan said in a statement Saturday that limited vaccine supply meant the province has targeted those most at risk with severe outcomes and health-care workers most critically impacted by COVID-19.

Almost 42,000 health-care workers have received at least one dose, he said.

“In Phase 2, we will start immunizing all other health-care workers providing direct and acute patient care who have a high potential for spread to high risk individuals,” McMillan said.

“We will start this as soon as possible, based on the vaccine supply available.”

A spokesperson for AHS said some staff and physicians at Tom Baker were immunized during initial waves but that the organization has continued to re-verify its list of eligible healthcare workers and that some variations by site and area will happen.