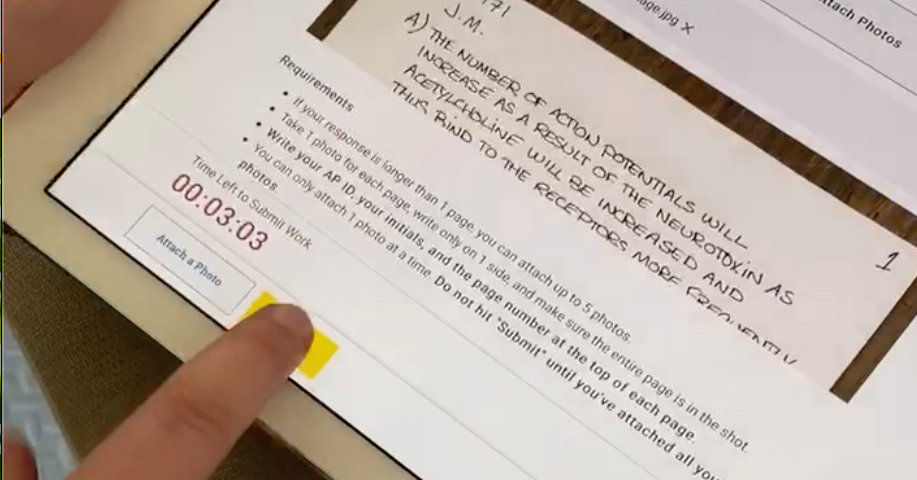 Julia Rock-Torcivia had everything in place for her Advanced Placement chemistry test.

She taped a handwritten sign to her bedroom door that said “Stop!” in a warning to family members not to disturb her.

The family’s two yappy dogs — Stella and Nixie, a terrier mix and a pug-Labrador mix — were relegated to a room from which they could not see squirrels. Her parents and sister had agreed not to use the Wi-Fi so they would not slow down the connection.

The exam started well, she said. But, with six minutes left, she tried to upload a photo of her answers, and the “submit” button froze.

She ran into the living room, sobbing.

“Everyone was yelling out suggestions: ‘Turn the Wi-Fi on and off! Do this and do that!’” she said, as her mother, father and sister hovered over the router trying to help.

Nothing worked. Time ran out. Her test was invalid.

Julia, a 17-year-old junior at Morris Hills High School in Rockaway, N.J., soon realized it was not just her: Students in her class, and thousands across the country, had also experienced problems with their A.P. exams.

Technical glitches during the online exams were the latest problem students have confronted as they navigate testing, college applications and college visits remotely during the coronavirus pandemic.

Testing problems have heightened stress for students and families figuring out a process that’s anxiety-inducing even under the best of circumstances.

The College Board, a nonprofit organization that administers the A.P. exams, said that submission issues had affected fewer than 1 percent of the roughly 2.2 million tests taken this week and that students would have the opportunity to retake tests next month.

“We share the deep disappointment of students who were unable to complete their exam — whether for technical issues or other reasons,” Zach Goldberg, a College Board spokesman, said in a statement. “We’re working to understand these students’ unique circumstances in advance of the June makeup exams.”

The College Board said in March that it would administer digital versions of the A.P. exams. The tests are a capstone to advanced high school courses that determine whether students can, in some cases, get credit for and avoid taking certain introductory-level courses in college.

The College Board, which also oversees the SAT, a standardized test that serves as a gateway to college for millions of applicants each year, also said that it would develop digital versions for students to take at home in the fall if the pandemic continues to require social distancing.

A spokesman for the ACT, a rival test, said that it too would move to at-home digital testing if necessary.

Critics have said that aside from technical difficulties, at-home tests could worsen inequality and make it easier to cheat. In a recent college admissions scandal, prosecutors accused some wealthy parents of helping their children cheat on the tests to get into top universities.

Mr. Goldberg, the College Board spokesman, said that when it became clear the A.P. test could not be administered in person, 91 percent of A.P. students surveyed nationwide said they preferred to take the exams online rather than not be able to take them at all.

Lynn Lubrecht, a math teacher at Morris Knolls High School in Rockaway, said despite all of the College Board’s practice exams and tips for students on taking the test online, four of her students, out of 50 who took the exam, had had problems.

“Every test they’ve ever taken has been in a school, in a room, with a No. 2 pencil,” she said. “Even though there was a trial, when it’s the real deal, there’s still a lot of stress.”

Joseph DosSantos, one of Mrs. Lubrecht’s students, was relieved when he finished his A.P. calculus exam.

“I initially was like, ‘Whew, I submitted the test, I’m all good,’” Joseph said. But when he double-checked his work and after he had already submitted the test, he realized he had accidentally uploaded the wrong photo of his answers for one problem.

He ran into the hallway outside his parents’ home office, where he was taking the test, panic-stricken.

“He said: ‘Oh my God! I can’t believe this! All that work!’” said his mother, Sarina DosSantos, who urged him to calm down and email his teacher. He is waiting to hear from the College Board about whether he qualifies for a retest in June.

Julia, who will retake the A.P. chemistry exam next month, said she had struggled with chemistry and was worried about the makeup test.

In frustration after her exam wouldn’t submit, she crumpled the sign that she had taped to her bedroom door telling family members to keep out.