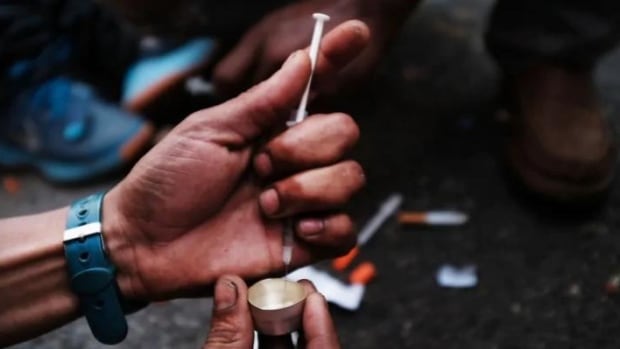 More than 50 human rights, drug and legal policy groups are pushing the federal government to halt criminal charges for simple drug possession as part of its response to COVID-19, arguing the pandemic has led to more dangerous drug use practices and a spike in overdose deaths.

In a letter to Health Minister Patty Hajdu, Public Safety Minister Bill Blair and Justice Minister David Lametti, the organizations say COVID-19 has forced supervised consumption sites and safe needle programs to either close down or reduce their hours.

“Heightened law enforcement surveillance in the context of the pandemic further hampers their access to vital health services and ability to use drugs safely, while also increasing their risk of arrest and detention,” the letter reads.

“Not surprisingly, some cities are already seeing reports of increasing overdose deaths since the onset of the COVID-19 pandemic.”

The organizations report the situation is also increasing the risk of HIV and hepatitis C infections among intravenous drug users at a time when Canada is already battling another public health emergency — the opioid crisis.

Between January 2016 and September 2019, there were about 14,700 opioid-related deaths across the country.

Many cities, including Toronto, are reporting a rise in suspected overdoses and deaths over March and April of this year, after a widespread shutdown of businesses and support services was imposed in response to the pandemic.

The groups that signed the letter — which include Amnesty International, the Canadian Nurses Association, the Canadian Public Health Association and the Criminal Lawyers’ Association — say the Controlled Drugs and Substances Act gives the federal health minister the authority to issue an exemption for criminal charges “on the basis that it is necessary for a medical or scientific purpose or is otherwise in the public interest.”

In  2015, the government granted exemptions for supervised consumption services using that same section of the act.

The groups say the federal cabinet also could issue a directive.

Harm reduction advocates have been pushing federal officials to decriminalize simple drug possession for years, arguing that such a move would offer major public health advantages while posing few risks to public safety.

“We’ve wanted (the government) to decriminalize simple drug possession more broadly, but we think now there’s even more urgency given the increase in deaths,” said Sandra Ka Hon Chu, director of research and advocacy at the Canadian HIV/AIDS Legal Network.

“The fact that people who use drugs are more often in public spaces means they’re more vulnerable to police surveillance, potential harassment or detention. And the last place we want them to be at this point is detention.”

Limiting the spread in jails, prisons

Ka Hon Chu said it would make little sense to put drug users in jail when provincial and federal prisons are taking steps to depopulate to limit the spread of COVID-19 behind bars.

The confined environment in detention – coupled with the fact that many incarcerated people have chronic health conditions – has led many to warn that the virus could spread quickly behind bars and lead to severe symptoms.

People who use drugs, especially those who are homeless or have precarious housing arrangements, are more likely to have the kind of chronic health issues that make them prone to developing severe symptoms if they’re infected with the virus, the groups say.

An expert in the United Nations Office of the Commissioner for Human Rights issued a statement last month outlining the additional risks that people who use drugs face during the pandemic. It said the COVID-19 crisis requires countries to take “extraordinary measures” to protect their health.

“To prevent unnecessary intake of prisoners and unsafe drug consumption practices, moratoria should be considered on enforcement of laws criminalizing drug use and possession,” the April 16 statement reads.