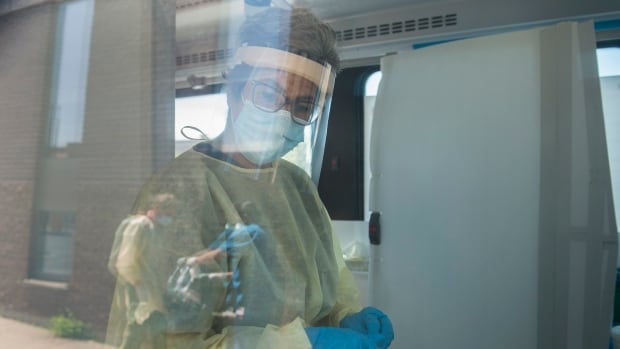 Health officials in Saskatchewan are opening up coronavirus testing, saying as of Monday anyone who works outside the home will be able to get a COVID-19 test — even if they aren’t showing symptoms.

“We have fairly low COVID activity and that’s where we want to keep it,” Chief Medical Health Officer Dr. Saqib Shahab said Wednesday as officials released an extensive list of who can be tested, including people being admitted to health-care facilities, people who are immunocompromised and the homeless.

Saskatchewan has reported seven deaths to date. The province has reported 620 coronavirus cases, with 494 of those cases considered recovered, with most new cases in the north and far north regions.

The shift in Saskatchewan comes as hard-hit Ontario and Quebec continue to face questions about ramping up testing.

When asked about a potential second wave of infection in the fall or winter, Prime Minister Justin Trudeau said looking ahead, his government is focused on how quickly a resurgence could be contained and controlled.

“That’s why the federal government has stepped up in its offer to provinces to support them in massively scaling up testing capacity and … contract tracing capacity,” he said Thursday during his daily briefing outside Rideau Cottage.

WATCH | Trudeau says any flare-ups in COVID-19 cases must be responded to quickly:

Trudeau said he will talk with premiers Thursday night about testing and how Ottawa can help scale up capacity where needed.

“We don’t want logistical or financial limitations to keep anywhere in this country held back from doing all the testing that is necessary.”

At his briefing on Thursday, Ontario Premier Doug Ford said he is frustrated that testing targets have not been met in his province.

“We cant just be testing people with symptoms,” he said. Ford said he wants to expand testing to those who work in the automotive sector, in food processing, and more. “Until we do that, we can’t get our hands around the whole system.”

Dr. Theresa Tam, Canada’s chief public health officer, recommended on Wednesday that people in areas with COVID-19 wear masks when they are in spaces that don’t allow for proper physical distancing. The mask guidance is meant to supplement existing public health measures like handwashing, cough etiquette and physical distancing, Tam said, as she explained the shift.

The Canadian Armed Forces said Thursday that 28 military members have tested positive for COVID-19 after being deployed to help at long-term care facilities in Ontario and Quebec.

Nearly 1,700 members of the Forces are working in nursing homes, where regular staff have been overwhelmed by the novel coronavirus. They are working in 25 long-term care homes in Quebec and five in Ontario, most in support roles such as cleaning, serving food and assisting with residents’ basic needs.

WATCH | What the military is doing in long-term care homes:

Lt.-Col. James Stocker explains what duties Canadian soldiers are taking on inside long-term care facilities and how they’re driven by a desire to serve. 7:33

As of 6:30 p.m. ET on Thursday, there were 81,324 confirmed and presumptive coronavirus cases in Canada, with 41,728 of those cases considered recovered or resolved. A CBC News tally of deaths based on provincial coronavirus reports, regional health data and CBC’s reporting stood at 6,250.

The novel virus, SARS-CoV-2, first emerged in China in late 2019 and has since spread around the world, causing devastating outbreaks, straining health systems and causing massive economic disruptions. The virus causes an illness called COVID-19, and while researchers are searching, to date there are no proven treatments or vaccines.

British Columbia is closing its provincial campsites to non-residents for the summer. Anyone from outside the province with a reservation must call B.C. Parks to get a refund. Read more about what’s happening in B.C.

Health officials in Alberta reported 33 new coronavirus cases and four new deaths Thursday. In Calgary, Mayor Naheed Nenshi announced e-scooters will soon be back on the streets and available to rent, and that public transit will not be parked for the summer, an idea floated by Nenshi’s counterpart in Edmonton this week. Read more about what’s happening in Alberta.

Saskatchewan’s bars and restaurants will be able to reopen June 8, but only at 50 per cent capacity. Gyms and other fitness facilities, as well as several types of personal services, would also be allowed to resume the same day, all part of the province Phase 3 of reopening. Read more about what’s happening in Saskatchewan.

Saskatchewan Premier Scott Moe details what will open under the next phase of reopening, slated for June 8. 1:08

Manitoba Premier Brian Pallister says the province is considering an early start to the school year. It’s also looking at allowing access to pools and gyms, and limited travel to Manitoba’s north as part of its next reopening phase, though no date was attached to the proposals. Manitoba is allowing outdoor gatherings of up to 50 people and indoor gatherings of up to 25 as of Friday, with physical distancing measures in place. Read more about what’s happening in Manitoba.

Ontario reported 413 new coronavirus cases on Thursday, bringing the provincial total to 24,187, with 18,509 of those cases listed as recovered or resolved. Health Minister Christine Elliott said the province will need to see a continued downward trend in the number of new cases before proceeding to the next stage of reopening. Read more about what’s happening in Ontario.

WATCH | Elliott lays out the criteria for moving Ontario from Phase 1 to Phase 2 of reopening:

Health Minister Christine Elliott says there are four key considerations when opening up, or further restricting, activity in Ontario. 1:42

Quebec Premier François Legault says summer day camps will open June 22. He says groups of kids will be smaller, and so the province will need more counsellors, and physical distancing will be maintained. As of Friday, people in Quebec will be able to gather outside in groups of up to 10 people. Read more about what’s happening in Quebec.

New Brunswick’s extended stretch with no new coronavirus cases ended on Thursday as health officials announced one new case. The news comes a day after the premier said he was considering easing the province’s ban on temporary foreign workers as employers face a labour shortage. Read more about what’s happening in N.B.

Some regions with low COVID-19 cases, including some Canadian provinces, are considering creating so-called travel bubbles to allow people to move freely within those areas, but experts say the concept has many flaws. 1:59

In Nova Scotia, Dalhousie University announced it is moving most classes online for the fall. The university president said programs like medicine, dentistry and agriculture will still happen offline, but with public health measures in place. The province reported one new coronavirus case and one new death on Thursday, bringing the provincial death toll to 58. The vast majority of coronavirus deaths in the province have been linked to the Northwood care home in Halifax. Read more about what’s happening in Nova Scotia.

Many Prince Edward Island business are getting set to reopen tomorrow as the province moves into Phase 2 of its recovery. There were no new cases reported on P.E.I. Thursday. All 27 cases in the province have been resolved. Read more about what’s happening on P.E.I.

Yukon is extending a program that offers relief for businesses that have seen revenue drop by 30 per cent or more during the coronavirus pandemic. Read more about what’s happening across the North.

The number of coronavirus cases is surging in Brazil, but President Jair Bolsonaro continues to minimize the situation. Bolsonaro is also advocating the use of hydroxychloroquine, an unproven treatment also promoted by U.S. President Donald Trump. 2:01