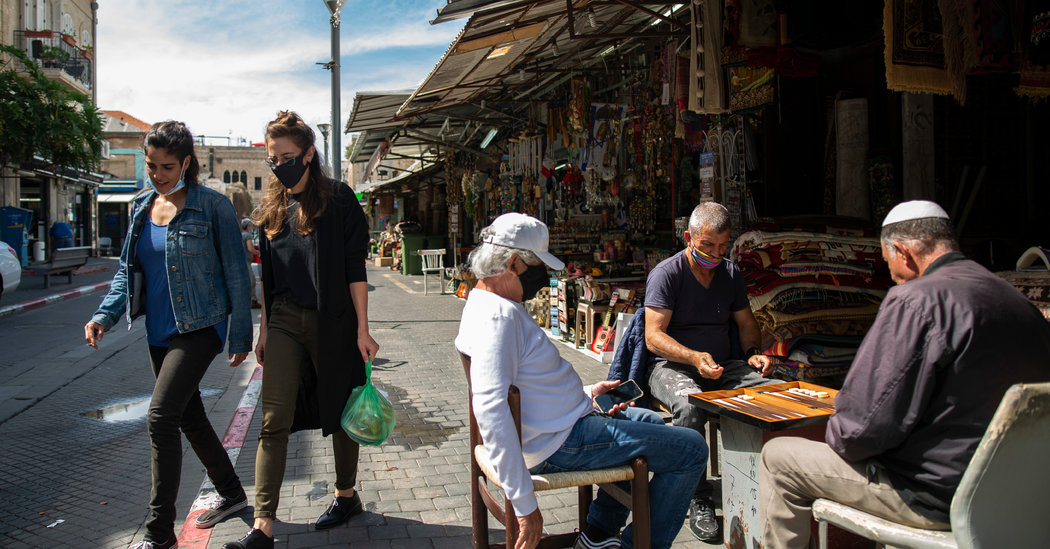 JERUSALEM — Israel, whose aggressive response to the coronavirus has held its fatality rate to a fraction of those of the United States and other hard-hit nations, is readying a nationwide serological test of 100,000 citizens to see how widely the virus has spread across its population and how vulnerable it may be to a new wave of the contagion.

The survey, to be conducted at clinics run by Israeli H.M.O.s beginning in a week or two, is one of the largest efforts yet to determine the prevalence of antibodies to Covid-19. Germany has also announced antibody testing using a representative nationwide sample.

The results could aid in deciding how quickly businesses and schools should be allowed to return to normal operations. On Monday, Israel announced that citizens could leave their homes after a 40-day lockdown, but many aspects of economic and social life remain curtailed.

Even more important, officials said, the survey’s findings could spur preparations for any strong resurgence of the virus, perhaps when hospitals and health clinics are also busy with seasonal influenza.

“This is the most important mission: Get ready for the next wave, especially a wave during wintertime,” said Moshe Bar-Siman-Tov, director-general of Israel’s health ministry, in an interview on Tuesday. “Luckily, the Covid-19 caught us post-influenza season. But we can’t assume that there’s not going to be a next wave or that it will be during summertime.”

Officials say they hope the survey will identify the portion of the healthy population that has not yet been exposed to the virus, and the portion that has already been exposed but has developed antibodies to it. The answers could have enormous implications for a country’s capacity to withstand a new wave of the virus.

If antibody tests show that a sizable portion of the population has developed antibodies, that could mean Israel is on its way to “herd immunity” and would be well equipped to withstand further outbreaks.

But if the tests show that only a tiny percentage of the population has been exposed, the country’s health system could still be overwhelmed by the spread of Covid-19, Mr. Bar-Siman-Tov said. He said estimates of the percentage of Israelis with antibodies range widely, from less than 1 percent to upward of 10 percent.

“We want to know the truth,” he said.

The World Health Organization has cautioned that no evidence exists that people who have recovered from Covid-19 or have antibodies to it are protected from another infection.

But Dr. Yair Schindel, a member of a health ministry task force on the virus who pushed for a large survey, said the Israeli study could produce such evidence. “Part of what we’re trying to achieve here is to answer the questions the W.H.O. is raising,” he said.

In the rosier one, the survey would show that 10 percent of Israelis have antibodies to Covid-19. If so, and if a future wave of the virus resulted in the same proportions of Israelis becoming critically ill or dying as have occurred so far, that would mean about 2,300 people would need intensive care, Dr. Schindel said. That would be well within the capacity of the country’s health system.

But in a bleaker scenario, the survey would reveal that only 1 percent of Israelis have antibodies, in which case the number of people needing intensive-care beds in a future wave could exceed 12,000 — well beyond Israel’s capacity, he said.

“It’s quite an exercise in epidemiology — so critical that it’s really important to do,” said Dr. Schindel, a co-founder of aMoon, an Israeli venture fund that invests in life-sciences start-ups.

Israel spent nearly $40 million to obtain 2.4 million antibody tests from two suppliers that have received Emergency Use Authorization from the Food and Drug Administration: Abbott Laboratories in the United States, and DiaSorin in Italy.

The blood tests check plasma for specific iterations of Immunoglobulin-M, or IgM, and Immunoglobulin-G, or IgG, that are created by the immune system in response to Covid-19. While IgM is created quickly as part of the body’s response to infection and dissipates soon, IgG lingers in the body and “represents our memory of our immunity,” Dr. Schindel said.

Patients visiting their clinics for blood tests for ordinary reasons will be asked to allow their samples to also be tested for coronavirus.

They will also be asked to complete questionnaires about whether and when they experienced symptoms, whether they were isolated at home or hospitalized, who among their friends and relatives contracted the virus, and so on.

Those whose blood tests show the presence of coronavirus antibodies will be called back for a standard polymerase chain reaction, or P.C.R., test for the virus, to determine the correlation between viral load and antibody levels, Mr. Bar-Siman-Tov said.

“There are so many things that we can learn and research, if we plan it correctly,” he said.

Asking so many citizens to submit to something as invasive as a blood test could seem a tall order in a country where a digital-surveillance initiative to identify coronavirus patients using smartphone location data set off political protests and lawsuits. Many Israelis, citing privacy concerns, also declined to download a government-sponsored app that was designed to help them avoid fellow citizens who had tested positive.

But Mr. Bar-Siman-Tov said he did not expect the survey to be a tough sell because participants will be told the results. “I think the people would like to know,” he said. “I mean, I think about myself, and I would like to know.” He added, “I think that we’ll have more demand than supply.”

Moreover, whether out of a tendency toward hypochondria or because their socialized health-care system makes it cheap and easy, as many as 70 to 80 percent of Israelis already have blood drawn in any given year, Mr. Bar-Siman-Tov said.

“Israelis are addicted to health services,” he said, laughing.

In addition to the broad nationwide sample, Mr. Bar-Siman-Tov said the ministry planned to test greater concentrations of subjects in cities that have experienced major outbreaks, like Bnei Brak and Jerusalem. Health-care workers will also be tested as a group. The remaining antibody tests will be made available to researchers for further studies, he said.

If the nationwide survey shows a large portion of the population has gained immunity, that could prompt the government to ease remaining restrictions faster, Mr. Bar-Siman-Tov said. But he said there was no going back to a stricter lockdown based on the serological tests alone.

Though Israelis have complained about chaos and inconsistency in the way the rules have been developed and enforced, the country has fared relatively well, with only 237 dead and 16,268 cases as of Tuesday afternoon. Fatalities per million of population are 27 in Israel, compared to 213 in the United States.

Mr. Bar-Siman-Tov said Israel’s experience had shown that “to be pre-emptive, that was the key.”

“The time to take action, or to take the measures that you want to take during pandemics, is when you think it’s too early,” he said, recalling decisions beginning with the cancellation of airline flights from China in early February.

“Everybody thought we were being too aggressive about it, or just exaggerating the threat, that nothing is going to happen, we’re just ruining Israeli foreign affairs, or being hysterical, or ruining the economy,” he said. “It usually took a day for us to feel that we did the right thing, and about two to three days for others.”