VANCOUVER — The call came in on an afternoon in March: a patient at a medical clinic in Vancouver complained of chest pains.

Paramedic Jeff Booton watched the details flash across the screen as he and his partner made their way to the clinic.

It was his first potential case of COVID-19 and he felt both trepidation and a sense of duty.

“I see this job as working in the service of people. And getting to do so in the context of a pandemic is obviously wrought with fear and apprehension some days, but it’s work that still resonates with me,” he said.

When Booton arrived, he put on protective gloves, a fluid-repellent gown, N-95 mask and face shield.

After a physical exam, they got back in the ambulance and Booton did what he always tries to do: comfort the patient as they travelled together towards St. Paul’s Hospital.

“I can only imagine what he was feeling in that moment, but it must have felt like a true sense of vulnerability to what uncertainty lay ahead,” Booton said.

Booton was one of at least 125 health workers, ranging from dispatchers and nurses to hospital housekeepers, who cared for the patient.

This is the story of those who cared for a single case at St. Paul’s.

Dr. Shannon O’Donnell knew she had only a few minutes to prepare after paramedics phoned the hospital to warn that a suspected COVID-19 case was on the way.

“I was a little anxious,” she said. “We don’t know what we’re getting, how much distress a patient is going to be in or how sick they’ll be. And you know, you’re worried also about being exposed to infection.”

The paramedics brought the patient directly into a negative pressure room set up for high-risk cases. It reduces the risk of the virus spreading by air.

Like everyone the patient would interact with, O’Donnell examined him through a heavy armour of personal protective equipment.

COVID-19 has transformed not only the hospital but O’Donnell’s home life, too. She and her husband, also an emergency doctor, juggle the full-time care of their three children at home since schools closed.

Together, they decided that if there were a major outbreak, one would work at the hospital and self-isolate from the family, while the other would care for the kids.

“My husband likened it to both of us running into a burning building at the same time.”

For registered nurse Rachel Mrdeza, some of the hardest cases to handle have been the older patients who arrive short of breath, with a fever and chest tightness.

“You know they’re in the window of vulnerability for having quite a dire outcome from COVID. That is really hard to see,” she said.

Under normal circumstances, the emergency doctor would work with several nurses but only one is allowed in the isolation room at a time to protect against contagion.

By the time registered nurse QianQian Wu began her night shift, she was only the third nurse to see the patient.

Wu began her shift by putting on the uncomfortable protective gear that she would wear all night.

“It’s a little hard to breathe sometimes,” she said. “And sometimes you get sleepy with it on for a long time, it’s very warm.” 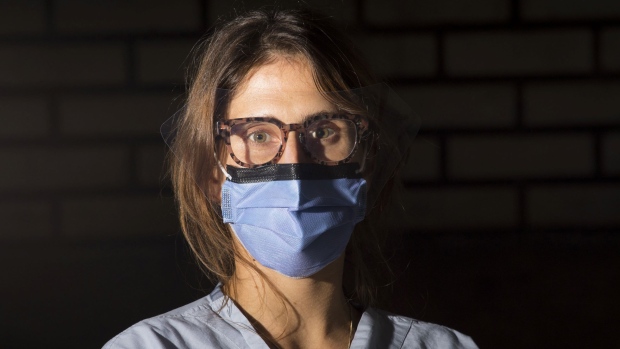 While the patient waited in the emergency department, blood samples and swabs were sent to the hospital’s laboratory.

“It’s not like a pregnancy test you get from London Drugs, it’s much more complicated,” Romney said.

The virology lab has been transformed since the arrival of a machine in March that can automate part of the testing process.

The Roche cobas 6800 system was adapted from HIV testing to increase the number of COVID-19 tests the lab could do that month.

Romney excitedly talks about the changes and ideas they’ve come up with to deal with the pandemic.

“We’re under tremendous pressure to deliver, it’s been a challenging time. But we’re pleased.”

It has also come at personal cost.

One technologist was basically living in the lab and sleeping only five hours a night. Romney went weeks without a day off.

“The front-line workers are amazing and we are here to support them but I think it’s good for people to know there are also a lot of people behind the scenes working on this too,” he said.

“It’s not just machines that are being plugged into walls, it’s very human what we do here.” 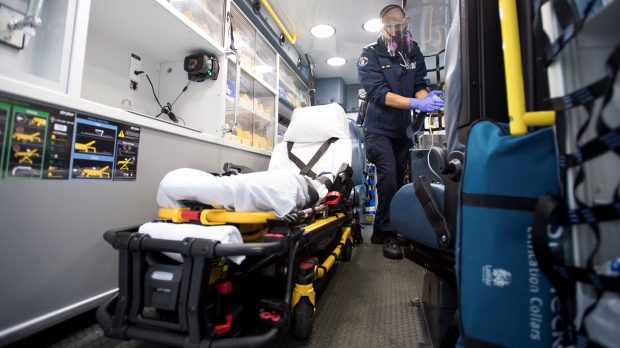 Suspected COVID-19 cases that appear more serious are accelerated to the intensive care unit for isolation. Back in the emergency department, Dr. O’Donnell called Dr. Mathieu Surprenant for an assessment while they awaited test results.

The 29-year-old clinical associate put plans to move back to Montreal on hold when the pandemic struck.

When he got the call from emergency, Surprenant headed downstairs with resident Dr. Charles Yang.

“In my mind I was wondering, OK what are the precautions I need to take in order to protect myself and other patients while maintaining the level of care I would typically provide for a patient,” Yang said.

The team examined the patient to develop his care plan before the patient was transferred to the ICU for monitoring overnight.

Initially, for example, the idea was to intubate as soon as possible because if a patient gets too ill, his chance of dying on a ventilator increases. But intubation is also more invasive than other procedures and risky for health workers because it pushes droplets of the virus into the air.

Since the pandemic began, recommendations have relaxed to allow for other treatments first but it’s constantly changing, Surprenant said.

He believed intubation was needed, which meant calling in a group dubbed the COVID airway team. 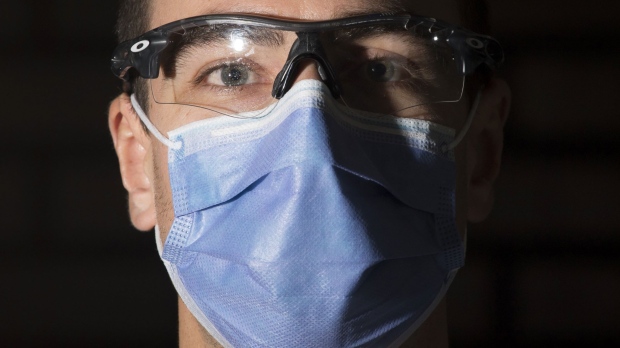 Anesthesiologist Dr. Shannon Lockhart was part of the planning group that conceived of the COVID airway team.

Their idea was to form teams with respiratory therapists to perform intubations so that emergency and ICU doctors wouldn’t expose themselves.

Anesthesiologists self-selected into one of three groups: The first wave was ready to start serving on the COVID airway team immediately. The second would step in if the first wave got sick. And the third would not participate because they or their loved ones were at risk of serious illness if exposed to the virus.

For Lockhart, the decision to be part of the first group was easy.

When Lockhart heard the patient needed intubation, she had already examined him and was prepared.

Putting a breathing tube into a patient’s throat under normal circumstances takes between five and six minutes. But she said that has ballooned to between 60 and 90 minutes because of the extra protective gear and the cleaning or disposal of everything in the room.

After intubating the patient, the riskiest part of Lockhart’s new job is doffing her gear.

Lockhart and the respiratory therapist watch one another carefully as they remove the equipment piece by piece, monitoring for any possible slip that would allow contamination.

“It’s kind of an interesting position to be in when you’re trusting this person with this very important task but you may never have met them before.” 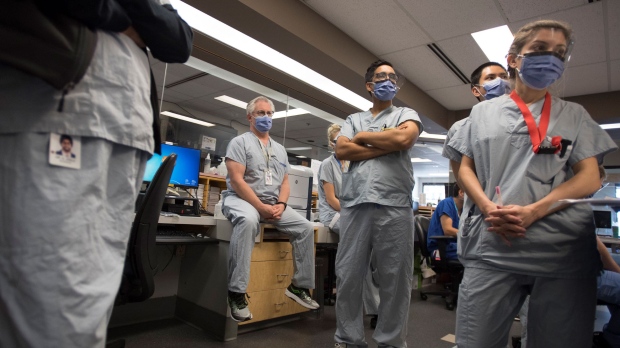 When Dr. Gavin Tansley met the patient, he was sedated and breathing through a ventilator.

Tansley had given the OK for intubation when Surprenant woke him up with a phone call.

In the ICU, the focus shifts to the more holistic care of all the patient’s major organ systems.

“Critical illness is a bit of a funny thing where you really do recognize how intertwined all of these organ systems are,” Tansley said.

When Tansley decided to become a doctor he wanted to help people heal. He didn’t realize at the time that in the ICU, he wouldn’t get to know his patients very well.

“Very often by the time I meet patients, they’re already sedated or on a ventilator or so sick that they can’t talk to you. So your relationship becomes with the family, and you develop amazing relationships with families,” he said. 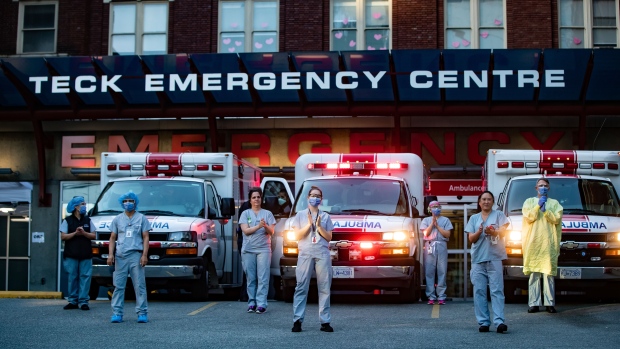 By the time the patient reached the ICU, about 25 health workers had played a role in his case. Some interacted with him directly, while others played important but indirect roles in his care, ranging from hospital housekeepers to X-ray technologists.

About 90 intensive care staff saw him, and from there, he would be turned over to a general medicine team.

Recovery is a long road involving a wide network of specialists from dieticians to physiotherapists and social workers.

Kevin Novakowski is a respiratory therapist and in his 28 years of work, he’s never felt an illness create such a constant psychological burden as COVID-19.

In recovery, a patient begins physiotherapy to build his strength. Novakowski is there monitoring how it affects his breathing.

But the first major step towards independence is weaning a patient off the ventilator.

As Novakowski monitored the patient, he began reducing the ventilator’s power and gave him short trials without it.

Weaning is a gradual process. Off the ventilator, a patient’s breath rattles.

“They cough and they sputter,” he said.

t’s a stressful process for patients. If they don’t keep coughing to clear their airway, infections can return.

During those first trials, Novakowski waits and listens.

“You listen to them breathing,” he said. “And then all of a sudden, it’s just kind of really quiet and their breathing just sounds like our breathing, normal.

This report by The Canadian Press was first published April 30, 2020. 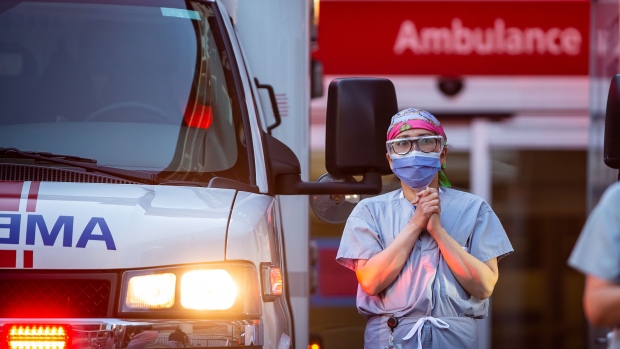