You Are Here Home Health News Holding out for 2nd dose of Pfizer COVID-19 vaccine over Moderna? There’s no good reason, experts say 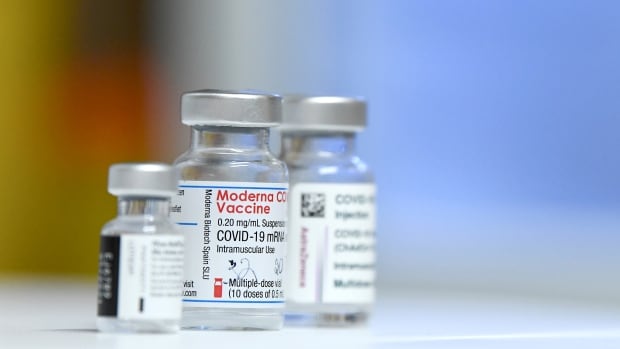 There are concerns some Albertans may be unnecessarily delaying their second COVID-19 vaccination because they’re reluctant to accept the Moderna vaccine, choosing instead to wait for a shot of the more scarce Pfizer version.

The province says it’s expecting fewer shipments of Pfizer doses than planned over the next few weeks due to supply-chain delays, but that there is plenty of Moderna available.

At Madigan Pharmacy and Compounding in northeast Calgary, unused vials of Moderna are sitting in freezers. Pharmacist Pratik Bhadra says that’s because many patients are opting to wait three weeks for a second Pfizer dose — even though they can get Moderna right away.

“I honestly don’t know, people just have a very fixed mindset,” he said.

Canada’s national advisory committee on immunization says Moderna and Pfizer can be used interchangeably because they use the same mRNA technology. And AHS is urging people to take the first vaccine they can get.

Craig Jenne, an associate professor at the University of Calgary in the department of microbiology, immunology and infectious diseases, says mixing is safe and provides equal protection

“If you can get that second shot in the coming days or next week that means you’re that much quicker to getting to full immunity where you get that substantial protection, even against the variants,” he said.

“So holding out for a vaccine of choice — when really they’re pretty much interchangeable — is just creating a long window where you may be susceptible to that delta variant.”

The province says there are 85,000 Moderna appointments booked at AHS clinics over the next three weeks, and there are nearly 200,000 appointments still available for second doses — most of them Moderna.