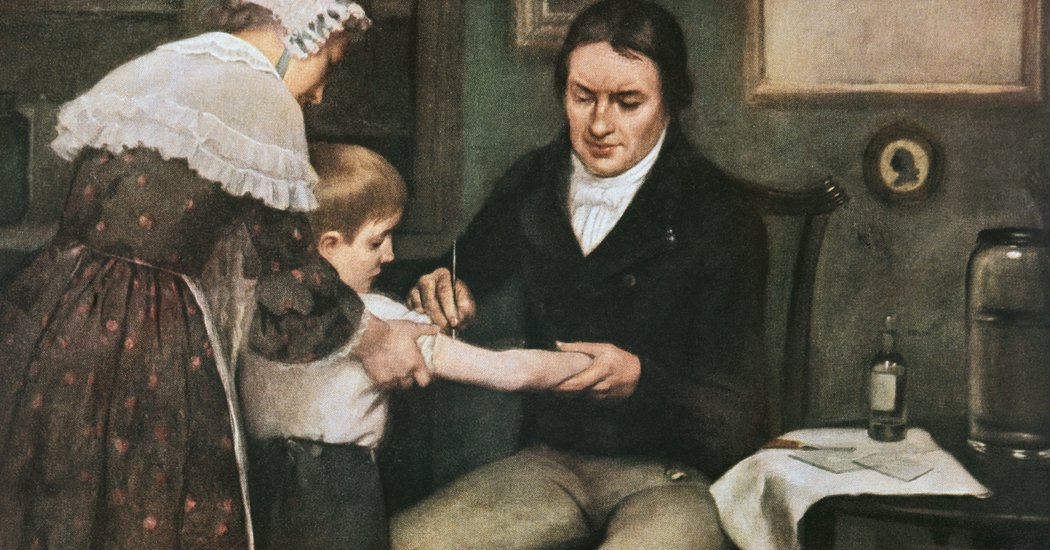 As many people check the news compulsively for even the smallest positive word on vaccine development, we are at an anniversary moment in vaccine history. We are between the anniversary of the day — May 14, 1796 — that Edward Jenner inoculated 8-year-old James Phipps with cowpox virus, and the day — July 1, 1796 — that he tested his new process by inoculating the same child with smallpox virus, to find out whether he was protected.

This is the season in which that experimental vaccine was doing its work in the child’s immune system, 224 years ago. Although that is not the kind of nice round anniversary number we usually celebrate, it’s worth reflecting on the biologic brilliance of the technique, on the ethics of vaccine development and testing, then and now, and above all, on what our bodies and immune systems are capable of doing, when appropriately prompted.

Because whatever the scientific brilliance involved in vaccine development — and we are watching an unprecedented level of inventiveness, improvisation, adaptation and cooperation now in the current Covid science — successful vaccine development amounts to our human entrepreneurial capacities allowing us to turn on a system that we certainly did not build ourselves, though we recreate it from our internal instruction sheets every time an infant is born.

Smallpox, caused by the Variola virus, stalked and killed humans for millenniums, leaving traces on the mummies of Egyptian pharaohs (it did not respect high rank) and in the ancient texts of China and India. It came into Europe four or five centuries before the Common Era, and Europeans brought it to the New World, where it devastated the Indigenous populations.

It killed anywhere from 20 percent to 60 percent of the people who were infected, left most of the survivors badly scarred, and a third of them blind. Mortality was higher among children, and almost all infected infants died.

Before there was any way to protect against smallpox, people did understand that those who had the disease and recovered would not get sick again, even if they were exposed to the disease. Building on this observation, before vaccination, there was variolation, a technique in which smallpox was deliberately introduced into the body of someone who had never had the disease, either by blowing dried scabs up the nose or by inoculating pus from a pustule.

Variolation was practiced in Africa and in Asia. Lady Mary Wortley Montagu, the wife of the British ambassador in Constantinople, her own face scarred by smallpox, had her young son inoculated by variolation in 1718, and brought news of the technique back to Europe.

It arrived in the New World as a practice known to some of the enslaved people brought from Africa; one of them, Onesimus, taught Cotton Mather about the practice, and Mather, a Puritan minister best remembered today for his role in the Salem witch trials, used the technique in a 1721 smallpox epidemic in Boston.

Variolation did confer immunity, when it worked, but it was a risky technique, with a mortality rate of 2 percent; people could develop full blown smallpox, or could spread the infection to others. The great human invention involved in vaccination, instead, was to turn on the immune system just as effectively with something that was not actually live potent smallpox virus.

The person widely credited with that invention, Edward Jenner, was a British country doctor. As a child in Gloucester, he had been successfully inoculated with smallpox virus. He was not the only one to take note of the observation that women who worked in dairies and contracted the much milder infection of cowpox — caused by the Vaccinia virus, named for vacca, the Latin word for cow — were immune to smallpox. In fact, he was not the first to try using the cowpox virus to protect against smallpox, but he was the one who made an experiment of it, published his results, and took it on as a crusade.

The virus he used came from a dairymaid, Sarah Nelmes, who got it from a cow named Blossom. In May of 1796, Jenner inoculated the 8-year-old James Phipps, the son of his gardener, and carefully recorded the symptoms, as the boy developed low-grade fever, swollen lymph nodes under his arm, loss of appetite — and then recovered.

And then in July, Jenner inoculated him with smallpox, and he did not get sick. Jenner published his work a few years later. The practice spread in both Europe and the United States, although there was also controversy, right from the beginning, about whether it was dangerous, and whether it could — or should — be made compulsory.

Of course, medical research standards have evolved since then. “His experiment would be completely condemned, even though it demonstrated something of importance on a par with fighting today’s plague,” said Arthur Caplan, a bioethicist at NYU Langone Medical Center. “He used a poor kid, who didn’t consent or volunteer, his father ‘volunteered’ him to please his employer.”

Still, Dr. Caplan has supported the idea of human challenge trials for a new coronavirus vaccine, that is, of deliberately exposing vaccinated volunteers to the disease. “We’ve evolved an ethical framework that would make it more acceptable,” he said. “Giving the disease after you vaccinate is not inherently always wrong — it’s how you do it, how you select the person.”

What was happening in 1796 inside the body of James Phipps was something for which Jenner had no vocabulary, a highly complex immune process which has only begun to be teased out over the past 20 years.

The vaccinia virus turned on an intricate “cascading network of integrated immune pathways,” scientists wrote in a 2009 article. And then the vaccinated person was left with a group of white blood cells, a “small, long-lived memory population capable of responding to subsequent infection.” That’s vaccination — isn’t it beautiful?

As for Jenner, he set up a clinic in a small garden cottage, calling it the “Temple of Vaccinia,” and offered free vaccination to the poor. His own family was blighted by a different microbe; tuberculosis killed his son and his wife

Smallpox was our familiar; it infected only humans. That was, in the end, what made it possible to dream of eradicating the disease, by vaccinating the world, by tracking down every last case. And the eradication of smallpox (the last natural case was in 1977) stands as the kind of human achievement — multinational, data-based, reaching all levels of society — that we need our scientists and our governments to replicate now.

Because we are living through a pandemic, we find ourselves hoping now for a vaccine which will, in some sense, give us back the world, or at least, a sense of safety as we move about it; protect our grandparents, allow our students to learn and live in groups, and offer us ways back to the many plans — for work and for play — which are currently shadowed, or on hold altogether.

Vaccination is named for that cowpox virus which successfully tricks the immune system, setting off that complicated powerful protective reaction without requiring exposure to the real danger. That’s what vaccines do, though vaccine science has come a long way since then; current approaches to a coronavirus vaccine would not include a live unaltered virus, like the one that Jenner used, but would rely on inactivated or weakened virus, or segments of viral genes.

To get to the vaccine we’re hoping for now — if we’re lucky — will involve a great deal of very smart science, and the participation of many animal subjects, from mice to monkeys, followed by a cohort of human volunteer subjects, to grant consent and be cared for according to our modern ethical framework, even if we do set up special pandemic parameters. It’s an appropriate moment to remember Edward Jenner, James Phipps, Sarah Nelmes and even Blossom the cow.

Dr. Perri Klass is the author of the forthcoming book “A Good Time to Be Born: How Science and Public Health Gave Children a Future,” on how our world has been transformed by the radical decline of infant and child mortality.