You Are Here Home Health News ‘Hospital Needs to Be Quarantined,’ but Works On in Country at War 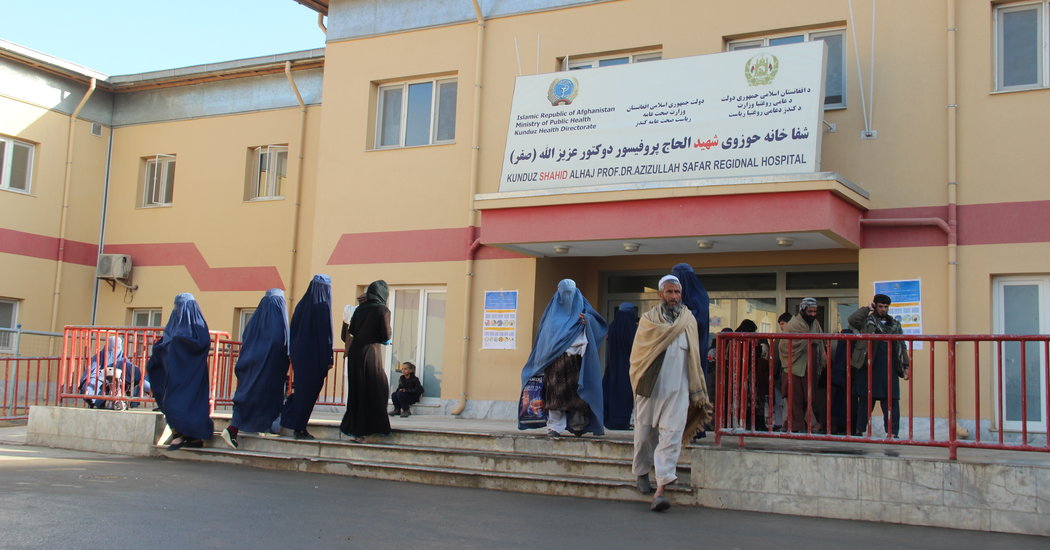 Now, about 70 doctors and nurses out of a staff of 361 at Kunduz Regional Hospital — the main health facility for several restive provinces in northeastern Afghanistan — are either infected with the coronavirus or in quarantine on suspicion of infection.

Yet there is no choice but to keep the doors open, said Dr. Naeem Mangal, the hospital director. The doctors cannot reject the dozens of war wounded who continue to arrive each day, as fighting rages every night within earshot of the hospital.

“The hospital needs to be quarantined, but what alternative do we have?” Dr. Mangal said. “It has made us so concerned that we are all scared of each other at the hospital because we don’t know who is infected and who isn’t.”

Afghanistan’s feeble health system is dependent on foreign donations even for the $5 per head the country spends annually on health, and reliant on nongovernmental organizations for the delivery of its most basic services. Now it is being tested by the spread of the pandemic at a time when war with the Taliban continues to rage nationwide.

Testing remains extremely limited, but as of Friday, the country had recorded just over 2,300 cases, with at least 228 among medical workers, and 68 recorded deaths. There is a risk that hospital visits could be fueling the spread of the virus.

Officials from several provinces said infections probably had not peaked. But the number of confirmed cases, together with concern about undetected ones, is already straining health facilities and forcing hospitals to improvise protocols and ration care between war-wounded patients and virus-infected ones.

Dr. Mangal said his hospital in Kunduz, where 23 of 37 confirmed cases are medical workers, had pleaded with people to visit the hospital only for severe emergencies.

Fighting rages every night within two to three miles of the Kunduz city center, and the hospital cannot refuse those wounded. For other patients, the hospital is turning away roughly half. Between 100 to 150 new patients are still being treated each day, with about half of them hurt by violence, Dr. Mangal said.

On Thursday, Afghanistan’s health minister, Dr. Ferozuddin Feroz, said the spread of the virus had continued as predicted by World Health Organization models, which suggest that more than half of the population could become infected.

“Yesterday, we had 500 tests and about 232 turned out positive,” said Dr. Feroz, a trauma surgeon during the country’s bloody civil war in the 1990s. “That would suggest the infection is truly circulating in society.”

Citing the Spanish flu, which lasted three years, Dr. Feroz said he feared an impoverished place like Afghanistan could be grappling with the coronavirus not for months but years.

The government’s ban on large gatherings and enforcement of some level of lockdown in major cities slowed the spread, he said, but too many people flouted those measures.

Some Afghans have been swayed by religious leaders who are disregarding advisories and continuing to hold prayers involving hundreds and sometimes thousands of people. Even the country’s Senate is refusing pleas to call off sessions and respect the government ban on large indoor gatherings.

More widely, deep poverty in Afghanistan, where people depend day to day on wages they earn, has made any strict enforcement of lockdowns impossible. One Western official, speaking on condition of anonymity to brief a reporter, estimated that 80 percent of the population already lived on less than $1.25 a day — just 25 cents more than the poverty line.

There are already widespread food shortages across the country. In Kabul, the government started distributing bread on Wednesday to about 250,000 families through 1,200 bakeries across the city, each family getting between four to 10 loaves once a day, depending on the number in the household.

It is an emergency measure to prevent deaths from hunger, and it will be extended to other cities in coming days. But crowds outside bakeries on the first day of distribution raised concerns that the measure would also fuel the spread of the virus.

In several provinces, medical workers and hospitals are bearing the brunt of the virus.

A hospital in northern Faryab Province, where fighting continues in several districts, may be forced to quarantine the I.C.U. section of its only hospital, said the governor, Naqibullah Faiq. He said it “has turned into a source for spreading the virus,” after a nurse there tested positive and another patient died of the virus.

In Kandahar, the public health director, Dr. Tawus Naderi, said the main regional hospital, which serves several neighboring provinces, planned to hire 300 new health workers. But until then, with 41 doctors and nurses down with the coronavirus, the mildly ill are helping to care for the seriously ill.

“We have admitted the infected health workers to the hospital allocated for Covid-19 and have created a mechanism where healthier patients are serving the more severe patients of Covid-19 to cover the gap,” Dr. Naderi said.

A major factor limiting the country’s response to the virus is the raging war.

The Taliban have refused a call for a cease-fire on humanitarian grounds, even as they have highlighted the threat from the virus by demanding their prisoners be released immediately from jails where the virus has started spreading.

The head of the Taliban’s health commission in Kunduz Province has also been infected and is self-isolating, local insurgency members confirmed.

Dr. Feroz, the health minister, said his staff across the country faced a challenge the impoverished nation was unprepared for. In planning for the worst case scenario, they have created a database of 10,000 new health workers as a backup that they can tap into for new hires if current staff members are infected or need additional support.

Dr. Feroz said he was drawing optimism from how low the country’s coronavirus fatalities had been so far, which he said could be partly attributed to the fact that Afghanistan’s population is young, with about 60 percent of people under 25.

“It’s possible that we have more deaths that are unreported to us,” Dr. Feroz said. “But we haven’t seen mass deaths.”