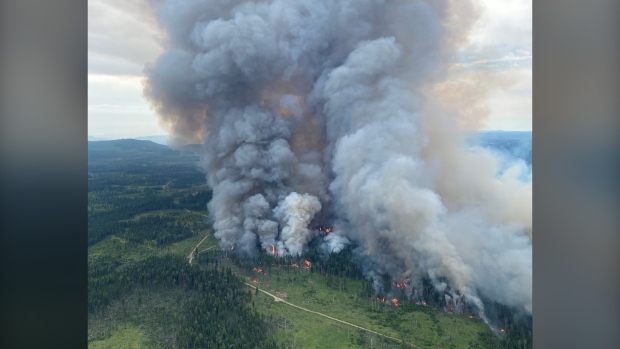 VANCOUVER — A group of patients at a B.C. hospital are being moved out proactively as officials keep watch on evacuation alerts in the area.

Some patients of the 100 Mile District General Hospital will be treated elsewhere for the time being, the Interior Health Authority said in a statement Wednesday.

Six of those are residents of long-term care, and two are what Interior Health described as “community care” patients. Nine are in acute care.

The hospital has not been evacuated, and anyone in the area should still seek treatment there if needed.

However, Interior Health is monitoring wildfire activity across the region, and the move is meant to “ensure the safe continuity of their care,” it said.

The District of 100 Mile House is under an evacuation alert as crews battle the Deka Lake Wildfire and others in the area. The nearby Cariboo Regional District has ordered some residents of a neighbouring area to leave their homes, while others in the CRD are also on alert and told to be ready to leave with short notice.

The most recent information on the fire from the BC Wildfire Service was that the blaze southwest of Deka Lake was being held, and had reached 650 hectares in size.

Mitch Campsall, mayor of 100 Mile House, says people are getting concerned as they see fires in the area drawing closer, but that residents are prepared if they need to leave.

He told CTV News he’d like to see a state of emergency declared in the province, as would many municipal officials, but he said they also feel they’re getting support.

“We’re not being ignored by any stretch of the imagination,” Campsall said.