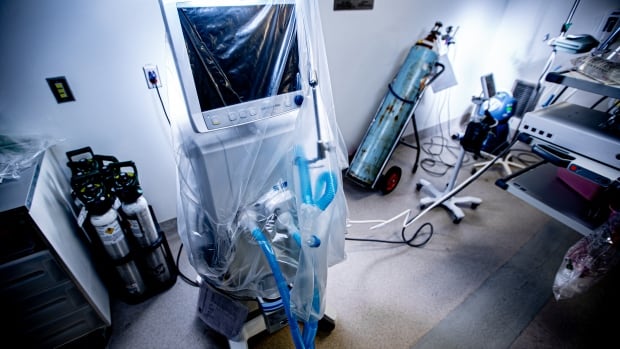 Canada’s hospitals and health officials are looking at ways to boost the number of available ventilators to prepare for a deluge of very sick COVID-19 patients amid projections that they could run out of such life-saving equipment within weeks.

While most people who get COVID-19 only face mild symptoms, the sickest end up in intensive care units and must be attached to ventilators in order to survive and recover.

A new study shows Canada’s most populated province, Ontario, could run out of ventilators quickly if the trajectory of the pandemic is similar to that in Italy. There, the coronavirus epidemic has already overwhelmed the health-care system, forcing doctors to make hard choices about which patients get access to life-saving resources such as intensive care beds and ventilators.

Ontario has implemented school and restaurant closures and is encouraging social distancing among residents in an effort to stop that from happening, notes Beata Sander, a scientist who has been modelling the potential impact of the pandemic on the province’s health-care system.

“What our modelling is showing is that if we cannot keep these interventions in place … we’re going to run out of capacity really, really quickly — likely in the next two weeks, Sander said.

Sander is a University Health Network Scientist and an associate professor at the Institute of Health Quality Management at the University of Toronto. She and her colleagues looked at a variety scenarios that estimated when the hospital system would run out of resources without an increase in ventilators and ICU beds. The study was published online by the researchers Thursday, but has not yet been peer-reviewed.

It found that even under a “conservative” scenario where cases increase only 7.5 per cent per day, ventilators would run out after a month.

That’s because very sick patients tend to spend one to three weeks in hospital, Sander said. “They’re piling up.”

Sander suggests 25 per cent be freed up for COVID-19 patients by cancelling elective surgeries and discharging patients.

She said her main concern now is that Ontario keep up its social distancing measures and that “we absolutely do the planning and ramp up our capacity of ventilators and ICU beds. It has to happen.”

Meanwhile, hospitals are looking at creative solutions. Dr. Alain Gauthier, an anesthetist at the Perth and Smiths Falls District Hospital, has rigged up ventilators to be able to ventilate two patients at once instead of one.

He did that by following YouTube videos created by two Detroit doctors in 2006.

“At one point we may not have other options,” Dr. Gauthier told CBC News. “The option could be well, we let people die or we give that a chance.”

Watch: Does Canada have enough ventilators?

Fearing a potential shortage of ventilators, one rural Canadian doctor has rigged up a fix. 2:04

The hospital currently has four new ventilators and four in reserve that can’t be repaired.

Canada’s chief public health officer, Theresa Tam, said Thursday that the federal government hasn’t received any requests for ventilators from provincial health authorities, but has been acquiring some for its stockpile.

Prime Minister Justin Trudeau has also said Canada could do what the U.S. and Italy are doing: getting military forces to help with the production of personal protective equipment and ventilators.

Ontario’s health minister, Christine Elliott, has assured the public there are enough ventilators for now — and 300 more have been ordered.

“We’ve procured 300 more ventilators to add to the 210 we currently have in surplus,” said Elliott’s spokesperson, Hayley Chazan. “We continue to work on procuring additional ventilators.”

“We can’t rely on importing these ventilators,” he was quoted by Reuters as saying.

One U.S. company that manufacturers ventilators told CBC News earlier this week that it has stopped all international shipments, including those to Canada, due to large orders from U.S. emergency organizations.

Supply is also being squeezed by large orders in Europe. Germany has ordered 10,000 new ventilators and Italy has ordered 5,000, NBC News reported.