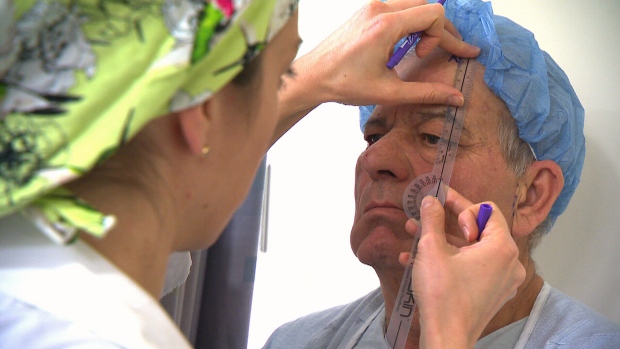 TORONTO — So much is said with a smile it’s a universal mode of communication that most of us take for granted.

But Luigi Quafisi lost the ability to smile because of a benign tumour called an acoustic neuroma that was located near his ear.

An acoustic neuroma is a slow-growing tumour that develops on the main nerve leading from the inner ear to the brain. As it swells, it can lead to hearing loss, and disrupt facial function.

Quafisi was diagnosed when he was 63. The tumour damaged the muscles and nerves in his face, leaving him with trouble blinking, eating and smiling.

He couldn’t even crack a grin for his six grandchildren, who often visited.

Brain surgery removed the tumour in 2017, but it couldn’t repair the damage the tumour had already done.

Quafisi told CTV News that the loss of movement in one half of his face was hard to deal with.

“It bothers me a lot,” Quafisi said. “I cannot do what I did before.”

But a Toronto doctor and a rare procedure offered him the chance to restore his lost smile.

Only a few doctors in Canada offer what is called “facial re-innervation” for adults, and Dr. Heather Baltzer of the Toronto Western Hospital is one of them.

To her, a smile is more than just a smile.

“It changes how you interact with your environment and it also changes how people perceive you and speak to you,” she told CTV News.

Baltzer, trained as a hand surgeon, first began taking on patients for facial re-innervation in 2016. Her first patient a woman close to her own age named Anastasia had lost her smile to a tumour like Quafisi.

It’s emotional work for her. But when the hard work is over, she gets a unique payoff.

“When you see them smile for the first time, it is the best feeling,” she said.

Facial paralysis can be caused by injury, tumours or Bell’s palsy, and it takes a toll, often leading to depression and isolation.

Baltzer said that those who have lost the ability to smile feel the disconnect of being unable to present their emotions the way they used to, and the way others expect them to.

“It makes a lot of patients feel very isolated, and it stops them from wanting to interact, outside of the home,” she said.

She added that often they “tend not to see friends because they are worried about how they’re going to be perceived.

“So that’s probably a main thing [that] really impacts their quality of life.”

In 2018, Quafisi came in for his first facial re-innervation surgery.

He had a typical type of facial paralysis, Baltzer said, where there is a droop in the features on one side of a person’s face, and they’re unable to close the eye on the affected side.

“The inability to smile on that side of his face as well impacts other functions like the ability to chew food, and to breathe through that side of the nose,” she said.

But although she’d seen this paralysis many times before, one of the differences between Quafisi and some of her other patients was his age.

“Because Luigi is a little bit older than some other patients … that impacts [the] way that nerves can regenerate and the time that it takes for nerves to regenerate,” Baltzer said.

The type of surgery Baltzer specializes in for adults is more commonly done in children.

There were two main focuses for Baltzer and her team in approaching Quafisi’s facial surgery: bringing back his smile, and restoring eye closure.

In order to do a cross face nerve graft, first they identified the nerves on the unaffected side that controlled smiling and blinking.

Then, they needed to replace the damaged nerves on the paralyzed side of the face.

“We take nerve from another part of the body,” Baltzer said, “and that acts like an extension cord running from the normal side of the face to the affected side of the face.”

Baltzer took a nerve from Quafisi’s leg and carefully inserted it into his face, connecting it to the healthy nerves on the unaffected side.

This type of surgery doesn’t instantly restore function to the damaged side, but new nerve fibres can begin to grow. It’s an important first step so that further surgeries can build on this base work.

The end goal is to get back that “spontaneous smile,” Baltzer said.

“So that when you laugh out loud, you smile with both sides of your face.”

A little more than a year after Quafisi’s surgery, he’s showing clear improvement. He’s able to smile if he bites down and focuses.

Baltzer said the work so far is “allowing him to have a smile when he thinks about it.”

He needs more procedures to fully repair his facial droop, but it’s not possible right now COVID-19 has put his procedures on hold.

For the moment, his smile must remain imperfect, but it’s a smile nonetheless. When he turned 68 this past April, he was able to celebrate by turning up both corners of his mouth.

After so much struggle, when his family grins at him, he can return the gesture.

“I like it when he smiles,” his wife said.

In Baltzer’s clinic at Toronto Western, other patients suffering from facial paralysis are also gaining back their grin.

“It’s the most exciting thing when they come back to [the] clinic,” Baltzer said. “It’s usually around three months that their nerve transfers starts to work, and they are able to smile with … that side of their face, and every time I get goose bumps.”