You Are Here Home Health News How Safe Are Outdoor Gatherings? 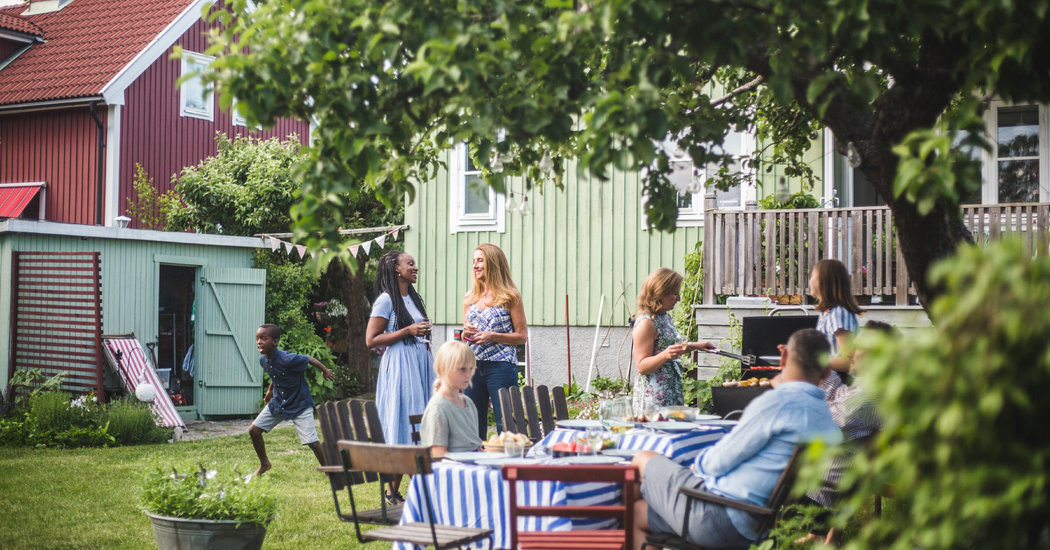 Is it still safe to socialize outside?

As the coronavirus continues to rage throughout the country, public health officials are telling us to stay home this holiday weekend. Beaches in Texas, Florida and California are closed. And now some recent backyard gatherings are being blamed for new cases of Covid-19.

The new restrictions and outbreaks have led to new confusion about the safety of socializing outdoors. But experts say the science hasn’t changed: Your risk of catching the virus is much lower outdoors than indoors. If you want to spend time with friends, taking the party outside will reduce your risk of contracting Covid-19.

“Outside is definitely safer,” said Erin Bromage, a comparative immunologist and biology professor at the University of Massachusetts, Dartmouth. “But it’s the type of interactions you have when you’re outside that are important.”

A Japanese study of 100 cases found that the odds of catching the coronavirus are nearly 20 times higher indoors than outdoors. Outdoor gatherings lower risk because wind disperses viral droplets, and sunlight can kill some of the virus. Open spaces prevent the virus from building up in concentrated amounts and being inhaled, which can happen indoors when infected people exhale in a confined space for long stretches of time, said Dr. Julian W. Tang, a virologist at the University of Leicester.

If you socialize outdoors, it’s important to keep the guest list small. Socializing with just one additional household is safer than mixing multiple households. Make sure that the rate of Covid-19 in your community is low and falling. It’s safest to socialize when the test positivity rate is at 5 percent or lower — a level that reduces your chances of inviting an infected person to the party.

Recent clusters of cases have been linked to home gatherings that appear to have broken those rules. After an estimated 100 people gathered for a party in Rockland County, N.Y., public health officials tracked nine cases to the event. In Washington D.C., a June 18 backyard fund-raiser with about two dozen guests made headlines when the host and a few guests were reportedly diagnosed with Covid-19. In Texas, a May 30 surprise party infected 18 family members.

But adding to the confusion about outdoor gatherings is the fact that the continuing protests over police brutality and the killing of George Floyd in Minneapolis have not been associated with spikes in cases. The reason the protests haven’t caused a surge may be because protesters were often moving, lowering the risk of spending extended time with an infected person. Many marchers were also wearing masks.

“I can tell you from our own testing in Minnesota, which has been substantial, we have seen no evidence of any kind of measurable impact of protests on cases,” said Michael Osterholm, director of the Center for Infectious Disease Research and Policy at the University of Minnesota. “There could have been cases, surely, but it was not a major amplifying event.”

Julia Marcus, an infectious disease epidemiologist and assistant professor in the department of population medicine at Harvard Medical School, said the data collected from protesters so far, along with studies suggesting that outdoors is lower risk for transmission, should reassure public health officials about the safety of masked outdoor gatherings and prompt them to open beaches and public outdoor spaces to help people gather more safely during the pandemic.

“Outdoors is what will save us,” Dr. Marcus said. “Why can’t the message be: ‘We understand you want to get together with friends. There are ways to do this safely.’ We’re just telling them not to gather. That doesn’t recognize basic human behavior and basic human needs.”

A review of 7,000 cases in China documented only a single instance of outdoor transmission — but it apparently occurred during a long conversation between two friends. One of them had just returned from Wuhan, the center of the outbreak.

If you attend a social event and find yourself in close conversation with someone from outside your household, even outdoors, wear a mask. Keep music levels low so people don’t have to shout. (Loud speaking expels more droplets than a quiet voice.) Don’t share food or serving utensils.

“I think people hear that it’s outdoors and think everything is fine,” said Linsey Marr, an engineering professor and aerosol scientist at Virginia Tech. “But it should be outdoors with distancing. If you have an outdoor gathering with a lot of people talking, you stand close. It’s loud, so you talk louder.”

Limiting the number of partygoers not only lowers your risk of running into someone who has the virus, but small numbers also make it easier to keep track of just a few people and maintain physical distance, said Dr. Asaf Bitton, executive director of Ariadne Labs at Brigham and Women’s Hospital and the Harvard T.H. Chan School of Public Health.

Dr. Bitton notes that when a group gets larger, even outdoors, it can affect our overall spatial awareness, including proprioception — which is knowing where our body is in space without relying on visual cues. Add in alcohol, and our ability to keep our distance falls short.

“We also know that alcohol or other drugs and medications can significantly alter all senses, with a particularly large effect on proprioception,” Dr. Bitton said.

Dr. Osterholm agreed that people should be aware of the effect alcohol can have on efforts to keep a physical distance.

“One of the problems that happens with parties or events like this if alcohol is involved, even the most well-meaning individual who is trying to stay apart a certain number of feet, it’s an unnatural act,” he said. “People do come together. That’s just human nature.”

Even though socializing outdoors is relatively safe, people need to stay aware and vigilant. While it’s easy to keep your distance from strangers, it’s tougher to stay six feet from people you know, Dr. Tang said.

“It is different when you are interacting with people that you know. I was chatting to my gardener outside earlier this week when I realized that neither of us had masks on and we were getting too close,” Dr. Tang said. “So whilst people can be more socially distanced when outdoors, especially amongst strangers, with friends and family and once you start talking to someone at a garden party, people forget themselves, and they get too close.”