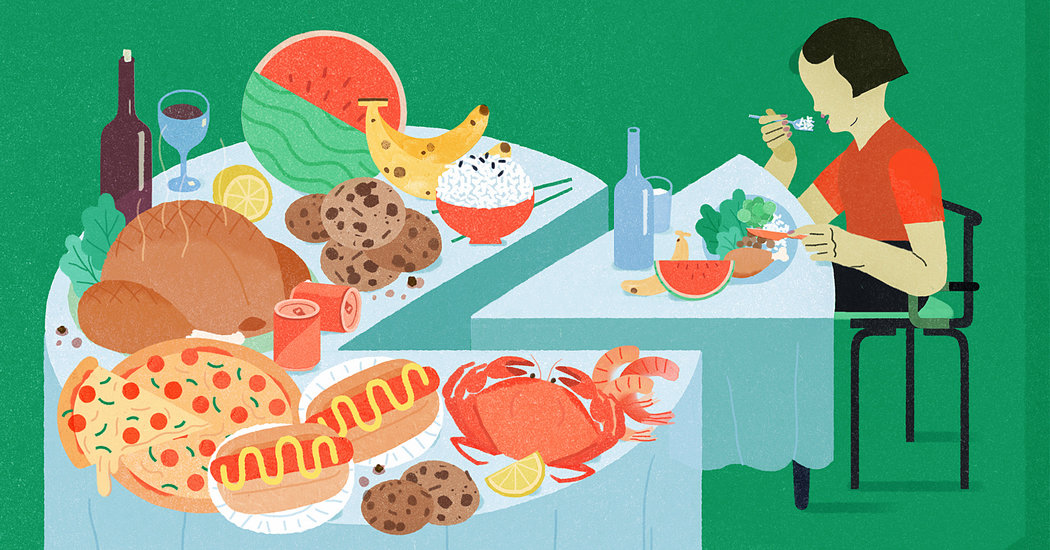 Many people who have struggled for years with excess weight know that the hardest and often the most frustrating job is not getting it off but keeping it off.

Recent decades have seen countless popular diet schemes that promised to help people shed unwanted pounds, and as each of these diets failed in the long run, they spawned their successors.

A diet, after all, is something people go on to go off. Most people think of a diet as a means to an end, and few who go on a food-restricted diet to lose weight expect to have to eat that way indefinitely. And therein lies the rub, with the current unchecked epidemic of obesity as the sorry result.

We live in a land of incredible excess. Rich or poor, most of us are surrounded by calorie-rich vittles, many of them tasty but deficient in ingredients that nourish healthy bodies. “We can’t go two minutes without being assaulted by a food cue,” said Suzanne Phelan, lead author of an encouraging new study in the journal Obesity.

Even the most diligent dieters can find it hard to constantly resist temptation. And once people fall off the diet wagon, they often stay off, and their hard-lost pounds reappear a lot faster than it took to shed them.

But these facts need not discourage anyone from achieving lasting weight loss. Researchers have identified the strategies and thought processes that have enabled many thousands of people to lose a significant amount of weight and keep it off for many years, myself among them.

The new study led by Dr. Phelan, professor of kinesiology and public health at California Polytechnic State University, identified habits and strategies that can be keys to success for millions. Yes, like most sensible weight-loss plans, they involve healthful eating and regular physical activity. But they also include important self-monitoring practices and nonpunitive coping measures that can be the crucial to long-term weight management.

The study, supported by a grant from WW, the current name for Weight Watchers, was conducted among nearly 5,000 of its members who reported losing an average of about 50 pounds and keeping all or nearly all the weight off for more than three years. Their habits and thought processes were compared with a control group of more than 500 obese people who reported neither gaining nor losing more than five pounds over more than five years.

Dr. Phelan recognizes the emotional challenges involved with achieving lasting weight loss. She said, “Weight loss itself is a very rewarding process. People notice and offer encouragement. But that all goes away with maintenance.”

However, she quickly added, “Maintaining weight loss can get easier over time. Over time, less intentional effort, though not no effort, is needed to be successful. After about two years, healthy eating habits become part of the routine. Healthy choices become more automatic the longer people continue to make them. They feel weird when they don’t.”

On the other hand, perfection is not realistic and can be self-defeating, Dr. Phelan said. “Successful maintainers know there will be lapses. But they also know they can recover from lapses and how to get back on track. They accept slips and don’t engage in black-and-white thinking like ‘I was bad,’ an attitude that is self-defeating. Rather, they know there will be ups and downs, and they have a plan for coping with lapses that’s empowering.”

A personal example from one who lost a third of her body weight and kept it off for half a century: I anticipate and plan for the times when I expect to be confronted with culinary largess. I’m a little more abstemious beforehand, enjoy the indulgence and get back to normal the next day.

Rather than constant deprivation and self-denial, I practice moderation. The study’s co-author, Gary Foster, who is chief scientific officer for WW, explained that in the WW program, “Everything is on the menu. Fad diets are overly restrictive, which dooms them from the onset. We advocate moderation, we’re anti-dieting. People have to find habits and routines that make long-term weight loss sustainable.”

And as many of the successful weight maintainers in the study reported, time and practice have permanently modified what I find appealing, so I rarely feel deprived and have less need to exercise self-denial all the time. I do admit, though, that I’m less good at ignoring cravings than many in the new study are. I’m more likely to give in but control the amount I consume.

What I may be best at is monitoring my weight. I weigh myself every day and keep within a range of two or three pounds. Nearly all the successful maintainers in the study weigh themselves weekly or more often, which makes it easier to self-correct before the numbers on the scale rise significantly.

Dr. Foster said, “What’s on your mind is as important as what’s on your plate. Weight management is something you do for yourself because you’re valuable, you’re worth taking care of.”

People must abandon the notion that “they can’t like themselves until they lose weight,” he said. “Rather, they have to start with a sense of self-worth and compassion. Weight management is a positive process, not a punitive one. Beating yourself up is not helpful, it’s de-motivating.”

Among the useful strategies identified in the new study is to keep lower calorie foods like fruits and vegetables more accessible. “We eat what we see,” Dr. Phelan noted. The corollary is equally important: keep high-calorie, less nourishing foods relatively inaccessible and out of sight if not out of the house entirely.

A good friend who struggles with his weight gets furious with his wife for bringing cookies into the house. “She knows I can’t resist them, and I’ve asked her repeatedly not to buy them.”

Dr. Foster’s suggestion: “Be very clear about what you want the person to do and not do. Say, ‘I’d really appreciate it if you didn’t bring cookies home. I want to live a long life with you and that’s not helping,’ and be sure to thank the person for following through.”

Other helpful tactics used by the successful maintainers in the study are setting daily calorie goals and keeping a food diary, recording everything eaten each day. This has helped another friend of mine sustain a loss of about 30 pounds for decades. “It keeps me honest,” she told me.

Although physical activity is not by itself very helpful with weight loss, adopting an exercise routine can give weight maintainers more leeway and help to keep lost pounds from creeping back. As Dr. Foster told me, “Calories in must balance calories out if you don’t want to gain.”

This is the first of two columns on achieving lasting weight loss.