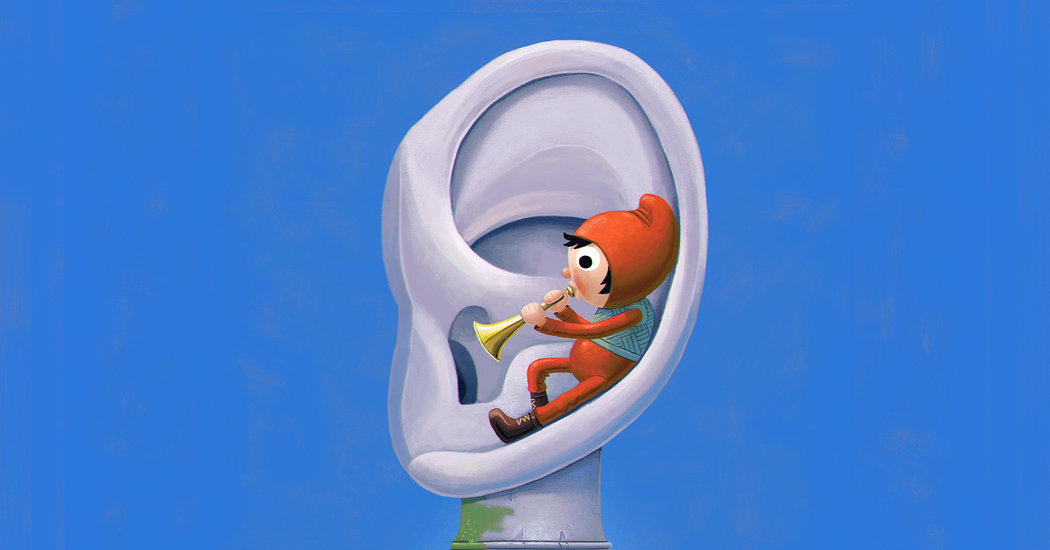 Children glued to their headphones. It’s a familiar scene these days.

Lauren Breeze of Nashville finds her 15-year-old son, Declan, wearing headphones all day. “He has always been a big music fan, but this is new since we have been home in quarantine. It’s almost like he has to have a soundtrack to his life.”

Her attitude: Anything to make it through the day. “I haven’t tried to get him to stop, especially now that things are so different,” she said. “Before, he didn’t walk around the house like this.”

With more families squeezed together for longer periods of time during the coronavirus pandemic, there’s more of a need for one’s own listening space. But lengthy listening on headphones or earbuds can be harmful. And volume is only part of the equation.

It’s noise dose that is significant, or roughly the duration times the volume. As one increases, the other should decrease.

Without proper safety measures, children could end up with hearing loss, communication difficulties and distressing symptoms of ear-ringing, aural fullness, sensitivity and pain.

“We have done an atrocious job of teaching people to value their hearing,” said Brian Fligor, Ph.D., a pediatric audiologist in Boston.

“People are more worried about social media, video games and screen time,” Dinerman said. “The doctor gives you a checklist: Does anybody smoke in the house? How much TV does he watch? What kind of food is he eating? But they never ask about headphones or volume or anything like that.”

She is also concerned about her 10-year-old nephew, who wears his headphones constantly while playing video games. The volume is so loud that, “if you ask him a question, he can’t hear,” she said.

With kids inclined to listen with headphones for longer periods of time these days, we asked some experts about safe listening habits.

Are headphones made for children safe?

Not necessarily. Children’s headphones are generally capped at 85 decibels, which helps. But there’s more to it.

“Treating 85 decibels as a safe level makes no sense at all,” said Rick Neitzel, Ph.D., an associate professor of environmental health sciences at the University of Michigan.

“Exposure is not just intensity — it is also how long it lasts and how frequently it occurs,” he said. “Ignoring the time is missing the point. This 85-decibel number has achieved mythical status not because it is safe but because it is one of the few ways that occupational noise is regulated.”

What’s more, some children’s headphones — the ones with volume limits touting their safety — are marketed as having comfortable ear pads and a long battery life, so children can rock all day long. “It is totally conflicting messaging,” Dr. Neitzel said.

Turning up a favorite song is fine. It’s constant exposure to much lower volumes that people don’t realize is so damaging.

So what is a safe amount of listening?

There is no one-size-fits-all answer. If forced to put numbers on such a complex concept, a safe limit for most headphone users for an unlimited amount of listening is 70 decibels, said Drs. Neitzel and Fligor, who published a recent paper on recreational sound exposure.

Both are consultants to the World Health Organization’s Make Listening Safe program, an initiative to raise awareness about noise-induced hearing damage.

For eight hours of daily exposure to noise, a “more liberal” limit is 83 decibels, but 75 decibels is a “realistic compromise.”

There is no need to suck the joy out of music. “When you impose some draconian maximum, you turn people off from what is an otherwise well-considered message,” Dr. Fligor said.

For comparison, 70 decibels is the whir of a small canister vacuum and 85 is a powerful upright vacuum.

Noise, however, is not always steady. It includes peaks and troughs, as well as factors such as frequency, harmonics and reverberation.

Furthermore, noise exposure is cumulative. If a headphone-loving child also practices the drums, mows the lawn or bangs on pots and pans every night at 7, the day’s noise dose soars. (For those activities, experts advise protective earmuffs. Earplugs can work for older children, but they are not especially user-friendly and they pose a choking hazard for young ones.)

An unknown factor is individual susceptibility. It’s impossible to predict whose ears are tough and whose are tender.

“The same noise dose has no apparent impact on some and a life-altering impact on others,” said Bryan Pollard, president of the nonprofit Hyperacusis Research, which funds research about noise-induced pain.

Damage from constant low-level noise builds up with little warning. People must decide for themselves how much risk they are comfortable with.

How do we know if we are damaging our ears?

It is often hard to tell until it is too late.

“A change in auditory perception can be gradual or sudden,” Pollard said. “You never know which exposure will be the straw that breaks the camel’s back.”

Then there is tinnitus, the ear-ringing that affects 10 to 20 percent of the population. It generally takes less noise exposure to cause tinnitus than to cause hearing loss. “Tinnitus is much more troublesome to people,” Dr. Neitzel said. It is often accompanied by a feeling of pressure or clogging called aural fullness.

Even more crippling is hyperacusis, a sensitivity that makes environmental sounds seem uncomfortably loud and can progress to a point where the clanking of dishes at mealtime causes lingering ear pain.

What can parents and children do to make listening safer?

Parents should check that they can’t hear sound leaking from their child’s headphones. They should also check the volume periodically or use locking controls. And the child should be able to hear when spoken to. Kids should also take breaks from listening.

Noise-canceling headphones, though pricey, are good for eliminating background noise, like during a car ride, so the child can hear clearly without raising the volume. Such headphones should not be confused with volume-limiting headphones or noise-blocking earmuffs, which are different technologies used for different purposes.

Dr. Fligor also suggests that a child’s hearing be tested at least every three years. A standard audiogram and a speech-in-noise test can catch future problems. Parents might also note whether a child says “what?” too often.

Any ear symptoms are serious — ringing, muffling, fullness, fluttering, thumping, sensitivity, distortion, pain — even if temporary. “They mean you have had a warning shot to your hearing,” Dr. Fligor said. “Hearing can be taken away fairly easily, and there is no fix for that.”