You Are Here Home Health News In Trump’s Words: Praise for the Taliban and Optimism About the Coronavirus 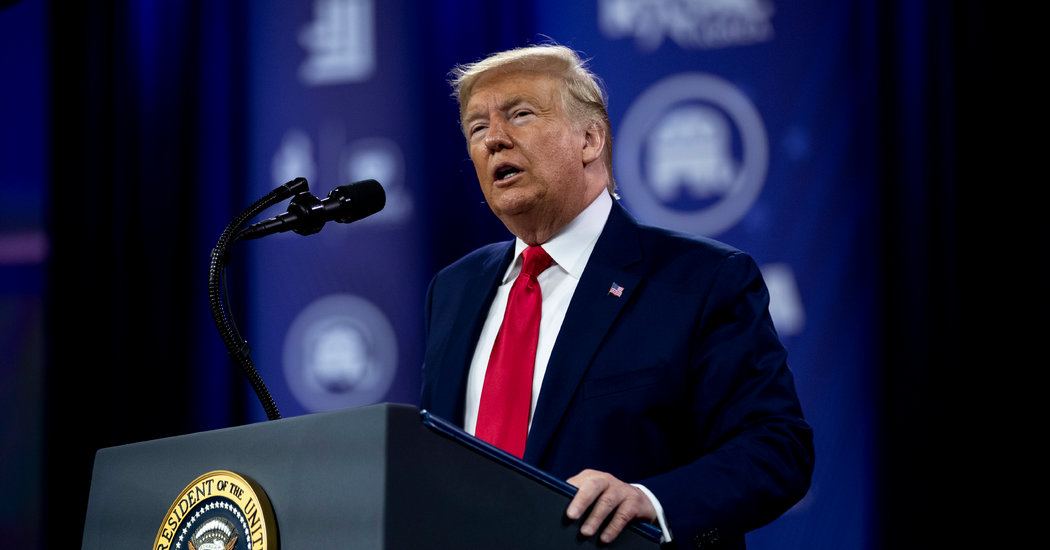 On a day that saw the signing of a historic agreement with the Taliban and the first American death of the coronavirus outbreak, President Trump found himself veering off message on Saturday during both a news conference and a speech at the Conservative Political Action Conference.

The president said the administration was thinking about closing the Mexican border to fight the spread of the coronavirus only to say a few minutes later that the border was not a problem. He said the first American victim was a woman, based on information provided by the Centers for Disease Control and Prevention, only to have Washington State health officials correct the record after a period of confusion over the patient’s identity.

“I’ll be meeting personally with Taliban leaders in the not-too-distant future and will be very much hoping that they will be doing what they say they’re going to be doing,” the president said at a news conference in Washington hours after the agreement was signed. “They will be killing terrorists. They will be killing some very bad people, they will keep that fight going.”

He went on: “As you know, we destroyed in Syria and Iraq 100 percent of the ISIS Caliphate, 100 percent. We have thousands of prisoners. We’ve killed ISIS fighters by the thousands, and likewise in Afghanistan, but now it’s time for somebody else to do that work and that’ll be the Taliban. And it could be surrounding countries. There are many countries that surround Afghanistan that can help.”

At the CPAC conference in Maryland on Saturday afternoon — a gathering of thousands of conservatives wholly devoted to the president — Mr. Trump picked up his theme of the Taliban as a potential ally.

He went on to joke that he had scheduled the signing so that he could present the news to CPAC.

“You know, we scheduled it for CPAC because what better place?” he said. “But we salute those who gave their lives and we salute all of those incredible people,” he continued. “And after years of rebuilding foreign nations, we are finally rebuilding our nation and taking care of our own American citizens! It’s time, right? It’s time.”

On the coronavirus, Mr. Trump at the news conference initially said that the Mexican border could be a port of entry for infected people, and that he had the power to limit access.

Minutes later, he contradicted himself.

“But right now, that is not a border as it pertains to what we’re talking about here,” he said at the news conference about the coronavirus. “This is not a border that seems to be much of a problem right now. We hope we won’t have to do that.”

At the news conference, he was asked about comments he had made on Friday when he denounced Democrats, describing the concerns they have expressed about the administration’s virus preparations as “their new hoax” after the Russia investigation and then impeachment.

“Hoax referring to the action that they take to try and pin this on somebody because we’ve done such a good job, the hoax is on them,” Mr. Trump said. “I’m not talking about what’s happening here; I’m talking what they’re doing. That’s the hoax, that’s just a continuation of the hoax, whether it’s the impeachment hoax or the Russia, Russia, Russia hoax. This is what I’m talking about.”

“This is very serious,” he added. He again accused Democrats of criticizing federal health workers, who, he said, “have done such an incredible job.”

“And I don’t like it when they are criticizing these people, and that’s the hoax,” Mr. Trump said. “That’s what I’m talking about.”