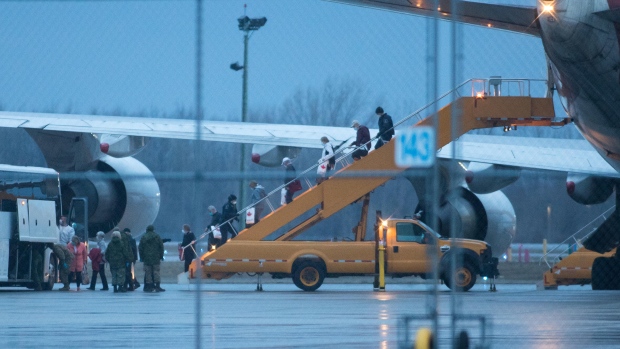 TORONTO — A “limited amount” of Canadian crew onboard the Grand Princess cruise ship have tested positive for COVID-19, foreign minister Champagne has confirmed.

A plane carrying 228 Canadian passengers from the coronavirus-hit vessel has landed at CFB Trenton for quarantine after they were repatriated from the U.S.

Ottawa chartered a jet to evacuate 237 Canadians from the ship in California, where the ship carrying 3,500 passengers docked on Monday. A number of Canadian passengers stayed behind in the U.S. with medical conditions not linked to the coronavirus.

The infected Canadian crew will remain on the ship, foreign affairs minister Francoise-Philippe Champagne said, but would provide the number of people affected.

About 1,100 Princess crew members, 19 of whom have tested positive for COVID-19, will be quarantined and treated aboard the ship, California Gov. Gavin Newsom said.

“We have certain crew members, a very limited amount of crew members, which tested positive, which are Canadian on the ship and will remain on the ship in accordance with the protocol that has been agreed by the CDC (Centers for Disease Control and Prevention) and local and state authorities in the U.S.,” minister Champagne said.

The Grand Princess had been held off the California coast since March 4 because of evidence that it was the breeding ground for more than 20 infections tied to a previous voyage, according to The Associated Press.

The Canadian government said in a statement that passengers would be screened for symptoms before boarding the chartered plane to Trenton.

“If they exhibit symptoms, they will not be permitted to board and will instead be further assessed to determine next steps,” the statement read.

The Canadian passengers now in Trenton face a 14-day quarantine before they can return home.

“Upon landing, the returning passengers were screened at CFB Trenton by quarantine officers and then met by officers from the Canada Border Services Agency,” a government statement read.

“They will be subject to a 14-day quarantine period and undergo the same medical assessment and observation as those Canadians who were previously repatriated from Wuhan, China, and Japan.”

Another Princess Cruises ship, the Diamond Princess, was quarantined for two weeks in Japan last month because of the virus.

The Diamond Princess, carrying around 3,700 people, became the site of the largest COVID-19 outbreak outside of China with more than 600 confirmed cases of the virus. Passengers were under quarantine on the vessel in Yokohama since early February.

Of the 256 Canadian passengers on board that ship, 48 tested positive for COVID-19 and were taken to local hospitals in Japan for further treatment.

The 129 Canadian passengers evacuated by the government were transported by bus to Cornwall’s NAV Centre, a large hotel and conference centre, for a second 14-day quarantine.

With files from CTV’s Adam Ward and Jackie Dunham