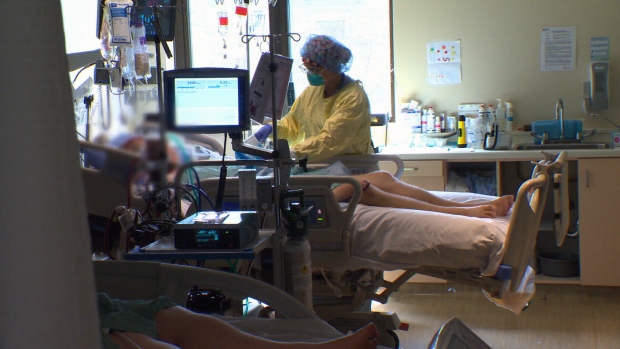 This is where the Omicron wave is starting to show its worst side: inside the ICU at Toronto General, which is filling up with critically ill COVID-19 patients, the majority of whom are unvaccinated.

There are twice as many COVID-19 patients here than two weeks ago.

“Based on the pace of which we’re seeing the phone calls and referrals, we’re looking at that slope having a very steep uptick, so we are preparing ourselves for an increase in numbers of people who are seeking our support,” Dr. John Granton, head of respirology at University Health Network (UHN) and a critical care specialist at Toronto General, told CTV News.

And the sick patients in this ICU are younger.

“Twenties, thirties, forties — meaning the official definition of young, i.e., younger than me,” said Dr. Niall Ferguson, head of critical care medicine at the UHN and senior scientist with the Toronto General Research Institute. “And often without any significant comorbidities, any other major illnesses.”

Doctors say obesity and diabetes do appear to put people at higher risk of severe disease, but the biggest risk factor is those who have skipped getting their vaccine.

In Canada the unvaccinated make up less than 13 per cent of the population.

At Toronto General, which cares for the sickest COVID-19 patients, 70 per cent in the intensive care unit are not vaccinated.

“In our units we’re seeing about two thirds of our patients are relatively young, unvaccinated and are showing up with severe disease,” Ferguson said.

“This is happening, it’s real and we’re continuing to see it, and I’ve got to say, it is very discouraging to continue to see this,” Granton said.

While Omicron is milder for those with immunity, and is causing fewer deaths than earlier waves, it is still sending more people to hospital around the world due to its high spread.

“It remains a dangerous virus, particularly for those who are unvaccinated,” Dr. Tedros Adhanom Ghebreyesus, Director-General of the World Health Organization, said.

Ferguson explained that with the high case levels we’re seeing in Ontario right now, even if more of those cases are mild, there is still going to be a high number of people in the ICU.

“The absolute number of severe cases is going to be a significant number, even if it’s a small proportion,” he said.

“Omicron is certainly breaking through two vaccine doses and causing a lot of infections. And that’s allowing it to spread and find unvaccinated people and make them really sick enough to be hospitalized and even need intensive care.”

Those who end up hospitalized tend to fit two profiles: unvaccinated people with little to no comorbidities, and those with some protection from vaccination but also other risk factors that caused them to be more at risk.

“We consistently see the sickest patients either not being vaccinated at all, or having an underlying immune condition which doesn’t allow them the opportunity to benefit from vaccination,” Granton said.

A key worry with Omicron is that in Canada, there may be fewer intensive care beds for the most critically ill, because there aren’t the specialized nurses and anesthetists needed to staff them compared to previous waves.

The high rate of younger, unvaccinated patients at Toronto General may partially be because it is one of the few hospitals that offers a high intensity life support called ECMO, which requires highly trained staff.

New patients were transferred to the hospital just today to go on ECMO, Granton said.

“We have three or four of those who are on ECMO because of COVID and a few more who are being assessed,” he explained. “That may small sound like small numbers, but it’s a very resource intensive form of therapy.”

Their capacity is being stretched, he said, noting that they had around 35 people on ECMO in total in the last week, “probably one of the largest in the world at any one time on ECMO.”

Omicron being so prevalent in the community is putting an extra strain on a workforce already thinned by the pressure of previous waves.

“For the first time, we’re having to deal with this surge of patients with a significant portion of our staff being at home, […] with relatively mild COVID but not wanting to come in and pass it on,” Ferguson said.

Granton said that the stress on staff is higher than ever.

“I think our nurses are in particular are experiencing a lot of stress, our respiratory therapists,” he said. “[They] really are the frontline. We as physicians, we’re very fortunate in that we’re not there. 24/7. And it’s really those folks who are experiencing the relentless onslaught of this pandemic.”

Hospital officials say they are doing their best to prepare for a rise in critically ill patients, highlighting that their ICU’s would be 50 or even 70 per cent less busy treating COVID if more people would get their vaccinations.

Granton said that if everyone in Canada was vaccinated, their ICU would be “a lot quieter.”

“We wouldn’t see it near the number of people that we’re seeing now.”

“They’re just scared and uninformed or haven’t had the right advice,” Ferguson said. “So most people do, when it comes down to it, wish that they’d had the vaccine and could turn back the clock.”

What NYC Dog Owners Should Know About Leptospirosis

After a Mastectomy, Moving Between Gratitude and Grief

Do you wishcycle? If so, you’re actually not helping to recycle.