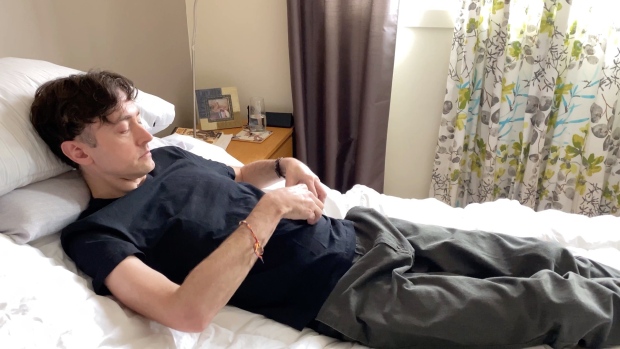 CALGARY — A Calgary man is calling out Apple after his new iPhone 12 caused interference with his medical implant which included a shock.

“It was like getting tasered. I fell down, it was it was excruciating and shocking, literally shocking pain,” said Matthew Harckham.

It provides ‘neuromodulation’ — the device stimulates his spine with a gentle current to ease chronic pain after he was struck by a bus in 2003.

The device is controlled externally with a device that he waves over a ‘pocket’ in his lower abdomen, while the pulse is sent to his spine.

Harckham purchased the phone on Jan. 16 and said he felt the shock on two occasions.

As well, he can turn on his medical implant by placing the smartphone over his stomach, which he says he’s been able to repeat numerous times, although it doesn’t happen while using an older model of iPhone.

He says the situation could have been worse if he was driving or taking the stairs.

Apple published a notice on its website on Jan. 23, warning that magnets and electromagnetic fields may interfere with medical devices.

Harckham says the manufacturer of his medical implant disputes this.

The company also issued a statement.

“Abbott designs our implantable medical devices knowing that there are magnetic fields created by mobile phones and other devices our patients will use in daily life,” said spokesperson Jonathon Hamilton. “We have recommended in our labelling and continue to advise that patients avoid placing their mobile phones and other electronic devices directly over their implanted medical device.”

The notice from Apple advises users to keep iPhone and MagSafe accessories (items to do with charging Apple devices) a safe distance away from medical devices.

Harckham says this is unrealistic.

“I don’t see how you could use a phone and always keep a six-inch distance away from wherever the device may be. Mine triggered when I put it in my pocket.”

An Apple spokesperson says the company does not know of any other reported cases of interference with medical implant devices outside the recommended distance.

Apple’s notice and the iPhone User Guide both advise users consult their physician and medical device manufacturer for advice on using the smartphone or related accessories, but adds, “if you suspect iPhone is interfering with your medical device, stop using iPhone.”

Harckham says he is pleased that Apple has updated their website with specific information, but he would like to see the tech-giant take it even further.

“I would like to see Apple issue a warning at point-of-sale asking you know if anyone in your family or the potential owner has a medical device and if so this device may not be for you,” he said.

Harckham plans to meet with his medical team next month and believes they are likely to study the phenomenon further.

He will sell or give away is iPhone and has been told he is not eligible for a refund from Apple as he bought the device with a gift card at Best Buy.

Discussions with his family about whether to upgrade their Apple devices to newer models are ongoing.