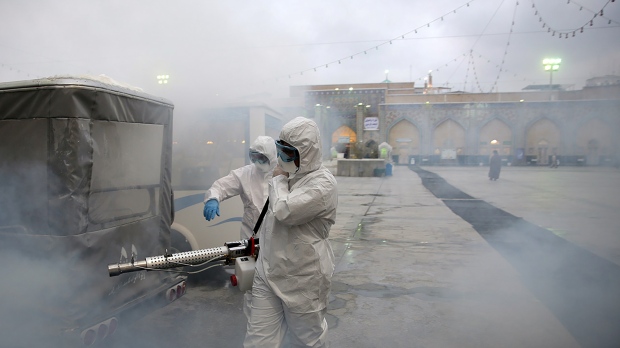 Iran will temporarily release 54,000 people from prisons and deploy hundreds of thousands of health workers as officials announced a slew of measures to contain the world’s deadliest coronavirus outbreak outside China.

Iran reported on Wednesday that its death toll had risen to 92, as 586 new cases were reported overnight, bringing the total up to 2,922, state media reported.

The country has come under pressure to take more action against the virus after Iraq, Kuwait, the United Arab Emirates and Bahrain reported cases with links to the Iranian city of Qom, where several holy sites are regularly visited by large crowds.

After weeks of refusing to restrict visits to the sites, the government on Wednesday said that those trying to leave Qom would be quarantined if they show symptoms of the virus, including a fever. Medical teams will begin taking temperatures of those trying to leave the city, according to Qom University of Medical Science’s Deputy Dean Ali Abrazi. He also said the university was building a field hospital to tackle the outbreak, according to state media.

Iranian officials initially reassured its nationals that the virus would be contained, but it has been forced to implement new controls after 23 members of parliament tested positive for the virus and an adviser to Supreme Leader Ayatollah Ali Khamenei died on Monday.

Iran’s Judiciary spokesman Gholamhossein Esmaili said the health ministry would oversee the release of prisoners, but did not elaborate on where they would be kept or how authorities would keep track of them, semi-official news agency ISNA reported.

“The health of the prisoners is very important for us regardless of their status as security prisoners or regular prisoners,” Esmaili said.

It was also unclear whether Nazanin Zaghari-Ratcliffe, the British-Iranian mother jailed in Iran on espionage charges, would be among those released.

Zaghari-Ratcliffe believes she has contracted coronavirus in Evin prison outside Tehran, according to a family statement released Saturday.

On Tuesday, Iran’s ambassador to the United Kingdom Hamid Baeidinejad tweeted that Zaghari-Radcliffe did not have coronavirus, amid calls for her to be tested.

He added that she may be granted a furlough on Wednesday or Thursday to join family in Tehran. Her husband Richard Ratcliffe told CNN her release had not yet happened.

The U.K.’s foreign office said in a statement: “We’re following up the Iranian ambassador’s comments on Nazanin Zaghari-Ratcliffe and are urgently seeking clarification from the Iranian Government on her situation.”

It also called for information from Iran on reports that the virus was spreading in Evin prison and to “immediately allow health professionals into Evin prison to assess the situation of British-Iranian dual nationals there.”

People in Iran are among those in many countries panic-buying goods in case the outbreak worsens. The country is facing a shortage of hand sanitizers, as demand for the products soar in the sanctions-hit nation.

Mahdi Shah-Moradi, a board member of Iran’s National Medical Equipment Producers’ Association, said the country has increased its production capacity of alcohol, a major ingredient in sanitizer, since the outbreak, but the logistics had made getting more products to people difficult.

The coronavirus that originated in the Chinese city of Wuhan has now spread to all continents, except for Antarctica, killing more than 3,000 people and infecting more than 90,000.