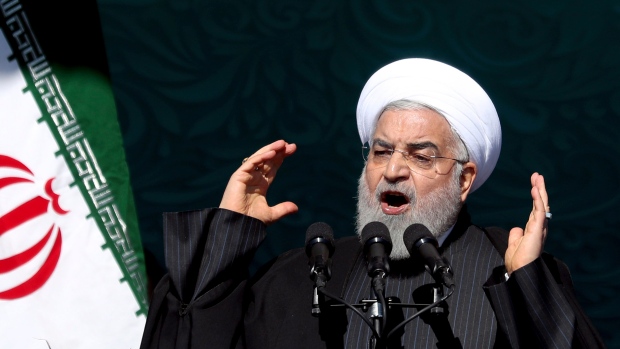 TEHRAN, IRAN — Iranian President Hassan Rouhani on Wednesday defended his government’s response to the coronavirus outbreak in the face of of widespread criticism that officials acted too slowly and may have even covered up initial cases before infections rapidly spread across the country.

In Israel, meanwhile, the government reported a 25% spike in the number of cases, while Iraqis in Baghdad hunkered down as a week-long government-imposed curfew went into effect. Saudi Arabia, leader of the group of the world’s 20 biggest economies, said it was working to organize an extraordinary virtual meeting next week about advancing a co-ordinated response to the pandemic.

Iran has been the hardest hit country in the region, with nearly 1,000 dead and roughly 90% of the over 18,000 confirmed cases of the virus in the Middle East. Its leadership announced Tuesday that “millions” could die in the Islamic Republic if people keep travelling and ignore health guidance.

In a speech to his Cabinet, Rouhani said the government was “straightforward” with the nation, saying it announced the outbreak as soon as it learned about it on Feb. 19.

“We spoke to people in a honest way. We had no delay,” he added.

The government has come under heavy criticism for what has been seen as a slow and inadequate response. For weeks, government officials implored clerics to shut down crowded holy shrines to stymie the spread of the virus. The government finally closed the shrines this week.

“It was difficult of course to shut down mosques and holy sites, but we did it. It was a religious duty to do it,” Rouhani said.

The outbreak has cast a shadow over the Persian New Year, Nowruz, a normally joyous holiday that begins on Friday. Health officials have urged the public to avoid travel and crowded places. But many seem to be ignoring the warnings, raising the risk of further outbreaks.

Some food markets in the capital, Tehran, were still packed on Wednesday, and highways were crowded with traffic as families travelled between cities. Iran also announced it would close mosques for communal Friday prayers for a third consecutive week.

The new coronavirus has spread to more than 100 countries, infected more than 195,000 people worldwide and killed more than 7,800. For most people, it causes only mild or moderate symptoms, such as fever and cough. For some, especially older adults and people with existing health problems, it can cause more severe illness, including pneumonia. The vast majority of people recover from the new virus.

In Israel, the Health Ministry said 90 more people had tested positive, bringing the country’s overall number to 427, a day after authorities issued a new series of guidelines that put Israelis in near-shutdown mode. There have been no fatalities so far, but 15 patients were in moderate to serious condition and the number of cases has been rising rapidly in recent days.

In a nationwide address Tuesday night, Prime Minister Benjamin Netanyahu warned of catastrophic consequences if people don’t follow safety instructions. “This is a huge crisis. We are only at the start of the campaign.”

The government has ordered most citizens to stay at home and to leave only for crucial circumstances. It has ordered tens of thousands into home quarantine, turned hotels into hospitals and was setting up drive-thru testing centres.

Most controversially, the government has instructed the shadowy Shin Bet internal security service to start deploying the agency’s phone surveillance technology to help curb the spread of the new coronavirus in Israel by tracking the moves of the infected. The step has sparked widespread criticism from lawmakers and civil rights groups.

The Palestinians have reported 44 cases in the West Bank, most from an outbreak in Bethlehem.

In Iraq, a week-long curfew went into effect in Baghdad where streets were largely empty of both people and cars, and most shops were closed. Only pedestrians were allowed on the streets to buy necessary foodstuffs and medicine, and heavily armed Iraqi police were seen patrolling the city and setting up roadblocks.

Demonstrators in Tahrir Square, the hub of Iraq’s anti-government protest movement, issued a collective statement that they were suspending protest activities to help stop the spread of the virus. Iraq has had 11 deaths among 154 confirmed cases of the virus, which causes the COVID-19 illness.

As global stock markets remain volatile, the United Arab Emirates’ Securities and Commodities Authority announced early Wednesday that local exchanges would only be able to fluctuate 5% before being shut down.

Meanwhile, the leaders of the world’s 20 biggest economies may hold an extraordinary virtual meeting next week about advancing a co-ordinated response to the pandemic.

Saudi Arabia, which currently leads the G20 presidency, said it is communicating with countries to convene the virtual meeting of leaders.

The kingdom said in a statement Wednesday the Group of 20 countries will act in any way deemed necessary to alleviate the impact of the pandemic and will put forward a co-ordinated set of policies to protect people and safeguard the global economy.

Saudi Arabia, meanwhile, has come under criticism by some officials around the world, including members of the U.S. Congress, over its moves to ramp up oil production to more than 11 million barrels a day after an agreement with major oil producer Russia fell apart. The Saudi decision to flood the market sent oil prices plummeting below $30 a barrel at a time when markets around the world are also plunging.

In Pakistan, Foreign Minister Shah Mahmood Qureshi, who this week visited China along with the country’s president Arif Alvi, said he is protectively quarantining himself on his physician’s advice.

Qureshi said Wednesday that China will provide testing kits, ventilators and other medical equipment to deal with the coronavirus outbreak in this Islamic nation. Qureshi told the an independent Geo news channel that China will also provide cash to Pakistan for setting up a state-of-the-art isolation centre and share its medical expertise.

His comments came as health officials confirmed more nine cases of coronavirus among pilgrims who recently returned from Iran. Now there are 246 confirmed cases in Pakistan, most in the Sindh province where authorities have quarantined hundreds of people upon their return from Iran.