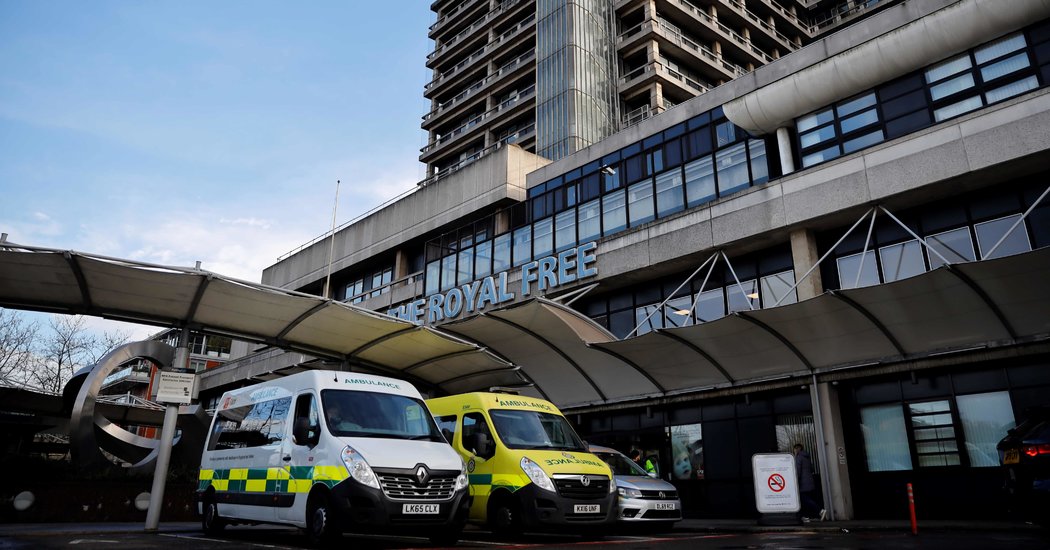 LONDON — Ventilators in short supply. Intensive care beds already overflowing. Some health workers buying their own face masks or hoods. And if cases of the deadly coronavirus surge in anything like the numbers some experts have predicted, doctors say they would have to consider denying lifesaving care to the frailest patients to prioritize those with better chances of surviving.

“If we haven’t got ventilatory support to offer them, it’s going to end in death,” said Dr. George Priestley, an intensive care doctor and anesthesiologist in Yorkshire in northern England. “I don’t want to be alarmist. I just want someone to pay attention.”

With the number of coronavirus cases in Britain climbing to 115 this week, and on Thursday the first fatality, Prime Minister Boris Johnson offered the first hints of how a health system sapped by years of austerity-driven reductions in budget growth would try to cope.

But for doctors already dealing with overflowing wintertime wards, there was little faith that even the most ambitious plans could keep the National Health Service from being deluged by a crisis that strikes where it is weakest — a severe shortage of beds for critically ill patients, which puts it behind much of Europe and has alarmed doctors for years.

“The N.H.S. has never been in a worse state going into something like this,” said Dr. Dominic Pimenta, a cardiologist and author in London. “The dominoes have been stacked for 10 years. It wouldn’t have taken much to tip them over.”

In many ways, Britain’s response to the coronavirus highlights the advantages of free health care in a crisis, analysts said. Roughly 18,000 Britons have received free testing so far. A national helpline has kept less serious cases away from hospitals. And doctors are counting on intensive care units coordinating closely as the crisis mounts to ensure the sickest patients have beds.

But in a dozen interviews with doctors and public health experts, the shortcomings of Britain’s efforts were laid bare, a lesson in the devastating consequences of a decade of trims to spending growth that have starved the health service of workers and beds at the very moment Britain most needs them.

“We’re already at maximum capacity and clearing out beds as best we can,” said Dr. Nick Scriven, a specialist in urgent conditions in Halifax, a town in northern England, and the former president of The Society for Acute Medicine.

Britain has shed roughly 160,000 hospital beds since the late 1980s as doctors shortened recovery times and tried to reduce reliance on hospital care, mirroring efforts across Europe. But Britain now has the second-fewest hospital beds per capita in Europe, according to the European Union. And a 2011 study suggested that it had one-seventh the number of intensive care beds per person that the United States did.

For severely ill coronavirus patients, that could spell trouble.

By Dr. Priestley’s estimate, hundreds of people out of a population of several hundred thousand in his area could require respiratory support as the coronavirus spreads. But his unit has only 17 intensive care beds. Doctors could make use of another 18 or so ventilators stationed in operating rooms, but beyond that, he said, “We’re talking about people squeezing bags.”

“If we get those kinds of numbers, nobody knows how we’d possibly cope,” Dr. Priestley said. “We’d have to do a very robust triage where only those with a high chance of getting better would get near a ventilator.”

Intensive care doctors cautioned that Britain was still some ways from having to make decisions like that. Even so, doctors said, it has been difficult getting the ear of hospital administrators.

At some hospitals, administrators have only recently started asking about supplies of ventilators and oxygen. Doctors are still doing their normal jobs — and sometimes picking up extra shifts — as they try to prepare their wards.

In some cases, they find parts of hospitals lacking even basic training and supplies to tackle the virus.

Doctors at an emergency room in south London, for example, were faced last week with a coughing, gasping patient who had recently traveled to a high-risk country in Asia. They considered whether to insert a breathing tube.

But there was a problem: The doctors who were supposed to administer an anesthetic had none of the right protective gear. Many had not been fitted for face masks at all, a major liability, said one of the doctors who handled the case.

So instead of being rushed to a hospital ward, the patient had to remain in the emergency department.

Before 2009, when the swine flu arrived in Britain near the end of a period of larger spending growth for the health service, hospital administrators had expressed concern about preparing for a pandemic, doctors said.

But administrators dismissed some proposals to increase bed or ventilator supplies as too costly, they said, and after withstanding the swine flu outbreak, never dealt with the underlying shortage of beds.

Protective gear has grown even more scarce since then at some hospitals. Dr. Scriven said every doctor where he worked had his or her own heavy-duty face mask during the swine flu. Now they need to be shared, though Dr. Scriven said a quick scrub between uses was enough to remove traces of the coronavirus.

Dr. Ganesh Suntharalingam, the president of the Intensive Care Society, said, “We do have the advantage of a unified health care system, but we’re also starting from further behind the start block than other countries because we historically have fewer intensive care beds per population, and they tend to be more full.”

Chris Whitty, Britain’s chief medical officer, has acknowledged that a large outbreak “will put very high pressure on the N.H.S..” But he added that the government would try to delay any explosion of cases until the warmer months, and that in any case the N.H.S. would be up to the task.

“The N.H.S. will always cope because the N.H.S. is an emergency service that is very good at adapting to what it finds itself with,” he said this week.

The government has also floated some bold ideas, like creating an extra 5,000 intensive care beds or treating people with at-home ventilators. It has even said it may be necessary to recruit retired doctors to help. But doctors were baffled by some of the proposals and unconvinced by others.

Dr. John Puntis, a pediatrician, said he had been pulled back from retirement once before, and it took two months of police checks, document approvals and new registrations to get to work. Now retired a second time, Dr. Puntis said that he would consider returning if his skills were applicable, but that retirees were also aware that they matched “the demographic that’s most likely to die from coronavirus.”

Family doctors say they have largely been left out of the government’s planning.

Despite instructions to bypass local clinics and go elsewhere for tests, some worried patients have shown up at family clinics because they had returned from northern Italy before the government deemed travelers from there eligible for testing. Many practices stock only a small supply of masks. And as the virus spreads, more non-travelers could show up with mild symptoms, not realizing they have the coronavirus, too.

“From our point of view, it makes us like sitting ducks for catching coronavirus,” said Dr. Sean Morris, a family doctor in London.

Meanwhile, family doctors are still seeing the usual crush of wintertime cough and flu cases at clinics. It has gotten busy enough in recent months that clinics sometimes get messages from local hospitals not to send people because of overcrowding, said Louise Irvine, a family doctor in London.

Some practices, said Dr. Sebastian Kalwij, another family doctor, are now rolling out experiments with telephone appointments to reduce the risk of infection. Shutting down any family practices could leave thousands of patients having routine chest pains or other problems without any place to go.

For that reason, said Dr. Sam Wessely, another London family doctor, the government should offer semiregular testing to health care workers to ensure they are not spreading the virus.

“The government needs to think about what to do to protect its health care workers,” he said. “Without them, you’re lost.”

At the south London hospital where the patient with a severe cough showed up last week, doctors later discovered that tests had come back negative for coronavirus.

But that was little solace to emergency room workers who saw firsthand how leaving some doctors unprepared for the coronavirus could unleash a cascade of problems.

“That’s not the way it should be working,” said one doctor who handled the case, speaking on the condition of anonymity. “It feels like we’ve been slightly caught on the hop with this one.”