You Are Here Home Health News Lessons from Pauingassi: How a variant scare at a remote First Nation can better prepare Manitoba 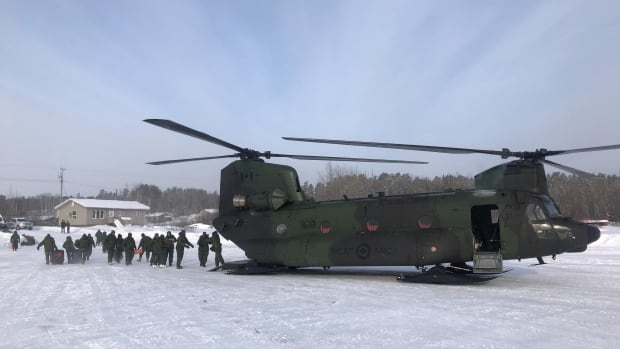 In the space of one week, Manitoba bounced around an epidemiological version of a roller-coaster ride, thanks to the real and supposed presence of the COVID virus variant first reported in the U.K.

On Feb. 9, public health officials confirmed the province’s first case of the more contagious B117 coronavirus variant, contracted by a traveller who visited Africa and Europe.

Four days later, First Nations health officials disclosed they found seven potential cases of the same variant in Pauingassi, an Anishinaabe community nestled into the coniferous forest of eastern Manitoba, accessible only by plane, winter road or an arduous ascent of the Berens River by canoe.

The unsettling prospect of a more contagious variant reaching one of the province’s most remote communities didn’t last long. Only three days later, the National Microbiology Laboratory in Winnipeg determined the Pauingassi cases in question were nothing out of the ordinary.

Manitobans can be forgiven for feeling as if someone just yanked their chains.

It would be fair to describe the collective mindset as somewhat fragile, given that the province only recently managed to reduce its COVID infection and hospitalization rates — after a miserable and deadly fall — to the point where most businesses are allowed to reopen to some degree.

Nonetheless, nobody at Manitoba public health or the First Nations pandemic response team was engaged in any funny business over the weekend. Red flags were attached to the Pauingassi cases in completely good faith.

“This is a fantastic learning opportunity,” said Dr. Marcia Anderson Manitoba, the head of the First Nations pandemic response team, on Tuesday, explaining this initial B117 scare will prepare remote communities for the real deal.

“There are some enhanced measures that we will be taking whenever there’s a potential variant of concern. That includes longer isolation periods for contact [and] potential retesting of contacts.”

2 steps to finding a variant

Determining whether a COVID-19 sample is one of three new more contagious variants is more complicated than testing for COVID itself.

For starters, it involves two steps.

The first step is a relatively straightforward screening test for a genetic mutation known as N501Y.

The presence of this mutation does not mean a sample is one of these more contagious variants. There are other, more banal variants with same mutation.

That’s why most positive COVID-19 samples that turn out to have the N501Y mutation are sent to Winnipeg’s National Microbiology Laboratory for a complicated form testing known as genomic sequencing, which maps out the entire genetic fingerprint of the virus.

It takes more than one technician or scientist to analyze the results of sequencing, which not only determines whether a sample is in fact a variant of concern but also adds another entry into a library of COVID genetics.

“Many different variants are discovered and tracked this way, including those that might be unique to Manitoba,” Manitoba public health said in a statement.

Dr. Brent Roussin, Manitoba’s chief provincial public health officer, said his office doesn’t wait until genomic sequencing is complete before it acts on how to handle someone suspected of carrying one of the three problematic variants.

“Whenever we see an indication of variants of concern are so important to us that public health, we’re going to act on it immediately as if it is,” Roussin said on Tuesday. “If we get sequencing that changes that, then we can adjust our measures.”

Those measures include more rigorous contact tracing and potentially more lengthy isolation. The province is in the process of figuring out new tracing-and-isolation standards for COVID-19 virus variants of concern.

Roussin acknowledges Manitoba public health would not announce a positive result to the initial screening phase, as the First Nations pandemic response team did on Saturday. But he did not criticize the team for doing so, given the abundance of caution that must be exercised when you’re dealing with a remote and vulnerable community.

For now, it seems, Manitoba has been spared the worst of the variant transmission seen in some other provinces. But it’s only a matter of time before more contagious variants supplant the COVID-19 strains circulating in Manitoba right now.

“We should be expecting further variants of concern to develop over time,” Roussin said.

The question is how many Manitobans can get vaccinated before this happens — and how many continue to adhere to pandemic precautions after more contagious variants arrive.