You Are Here Home Health News Let the Sunshine In 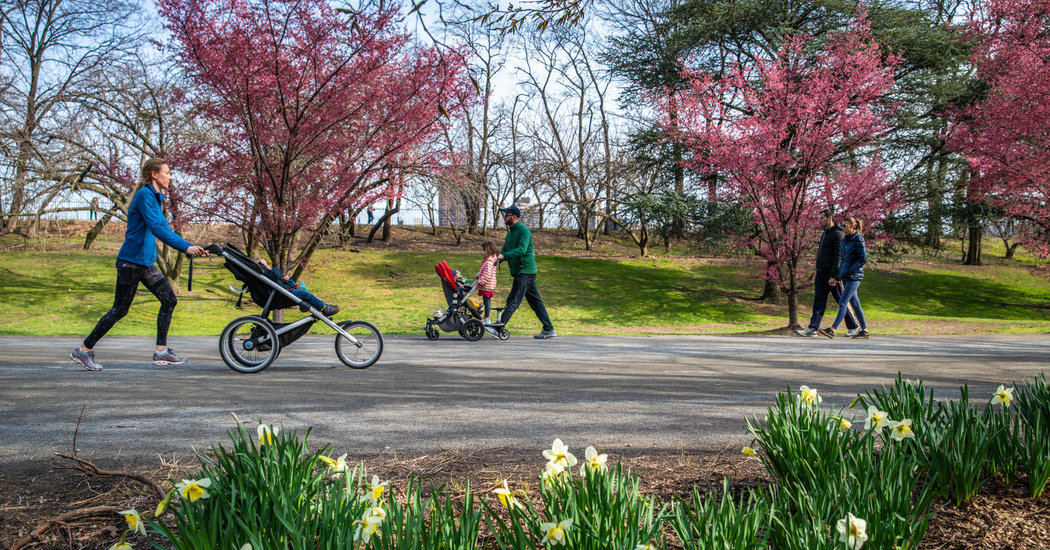 Deciding whether to head outdoors or to stay at home has never before felt so fraught, as many of us continue the weigh the benefits of getting some fresh air versus the risks of getting sick. For many, however, the enticements of a spring day are too powerful to resist.

“Yesterday it was raining and we felt kind of sorry for ourselves, but it’s hard to feel sorry for yourself on a sunny day like today,” said Nancy Penman, a resident of Manhattan’s Upper West Side.

Ms. Penman was one of many who were maintaining a safe distance between themselves and others while they walked in Riverside Park on a recent afternoon. “I hope they don’t close the parks,” she said. “We need our sun. I’ve heard it boosts the immune system.”

Ms. Penman may have a point. “There is now limited but convincing evidence that moderate sunlight exposure is capable of modulating the immune system and improving health,” said Daniel González Maglio, a professor at the University of Buenos Aires and researcher in the growing field of photo-immunology.

A daily dose of sunlight won’t fend off or cure coronavirus, though researchers continue to explore the effects that warmer weather and ultraviolet rays might have on the virus. But scientists are finding that exposure to the sun has numerous other benefits that may be especially important now — including helping to elevate mood, to improve the quality of our sleep and to strengthen the body’s innate defenses against a variety of pathogens.

The impact of sunlight on human health would not have been news for our ancestors, said the British researcher Richard Hobday, author of “The Healing Sun: Sunlight and Health in the 21st Century.”

“Hippocrates, the father of medicine, said that if you have a city that is properly oriented toward the sun you don’t have so many diseases in it,” Dr. Hobday noted. “Throughout history and all over the world, sunlight has been worshiped for its health-giving properties and used as a medicine.”

These ancient beliefs received scientific validation in the early 20th century, when sunlight was employed to kill tuberculosis bacteria and to treat the deficiency disease, rickets. Inspired by sun advocates like the pioneering nurse Florence Nightingale, hospitals and sanitariums were designed with large east-facing windows and skylights to maximize sun exposure for their patients.

During the Spanish flu pandemic of 1918-19, patients who were treated in overflow tent hospitals and regularly taken out in the sun when they were in recovery had lower death rates than those who were left indoors in dark and poorly ventilated wards, Dr. Hobday reported in a study published in the American Journal of Public Health.

Enthusiasm for sunlight as medicine waned after antibiotics began to be widely used during the 1930s, but it has recently revived, as evidence mounts for the complex role that vitamin D — sometimes called the sunshine vitamin, because the skin creates it when exposed to sunlight — plays in human biology.

Over half of Americans do not produce enough vitamin D, a result of spending some 90 percent of our time indoors, according to Dr. Michael Holick, a professor of medicine at Boston University. And that’s a problem, he says, because too little vitamin D can weaken our body’s ability to fight off infections.

Dr. Holick recommends to many of his patients that they take supplements of vitamin D. Overweight people, he says, may need extra high doses. But consult your doctor before doing so, since high doses can cause kidney problems and other complications.

Dr. JoAnn Manson, the chief of preventive medicine at Brigham and Women’s Hospital in Boston and a Harvard professor, says that the jury is still out on optimal levels of vitamin D, though some people might benefit from supplements “to hedge their bets.”

“The best approach is to have a heart-healthy diet and get the nutrients from foods,” Dr. Manson said, and to spend time outdoors in the fresh air and sunlight. “Being physically active outdoors helps people to maintain proper weight, reduces the risk of diabetes and heart disease, benefits bone health, lowers stress and improves emotional well-being. The list of benefits from physical activity is extensive.” Moreover, sun exposure enables the skin to create nitric oxide, which lowers blood pressure and improves cardiovascular health, Dr. Manson said.

But the fact that a little sunlight is good for health does not mean that a lot is better. “Too much exposure suppresses the ability of the human immune system to efficiently detect and attack malignant cells,” which can increase the risk of skin cancer, Dr. Maglio cautioned.

To gauge how long one can safely remain in the sun at different latitudes, seasons and times of day, Dr. Holick helped develop a free app called D Minder Pro that tracks the amount of vitamin D that your body is getting from exposure to the sun and warns you when you are staying outdoors too long.

Exposure to daylight is also critical for accurately setting our internal circadian clock, which in turn regulates sleep and waking, said Mariana Figueiro, the director of the Lighting Research Center at Rensselaer Polytechnic Institute in Troy, N.Y.

Without adequate light, we can go into a kind of permanent jet lag, Dr. Figueiro explained, where we get more easily irritated and depressed, our immune function is suppressed and our overall health may deteriorate.

Not everyone will be able to get outside now, or feel safe doing so. Those who remain indoors may have to take some extra steps to be exposed to the light that they need to remain healthy.

“If possible, work facing a window, especially in the morning hours, and avoid working in your basement,” Dr. Figueiro advised. “If you have one table lamp in the living room, you might want to increase that number to get the amount of light you need to stimulate the circadian system.” You don’t need special bulbs, she says, since ordinary incandescent lighting emits the wavelengths of light that we need to help set our biological clocks.

While exposure to morning light helps us to get a good night’s sleep later on, in the evening it has the opposite effect. “Turn off and dim your lights two hours prior to bedtime, because that is when your body starts producing melatonin, which is telling your body that it is night and time to go to sleep,” Dr. Figueiro said.

She also recommends taking a daily 15 to 45 minute walk when possible, while being careful to maintain adequate social distance between yourself and others, since outdoor light, even on a cloudy day, is far brighter and more biologically potent than indoor light.

Scientists also continue to explore whether sunlight might fight the coronavirus directly, as it does for other viruses. Paul Dabisch, an aerobiology specialist with the Department of Homeland Security, together with several colleagues, published a paper in November that found that flu viruses are rapidly inactivated when exposed to the UV radiation in sunlight.

“This is the first study to show that simulated sunlight will greatly decrease the infectivity of influenza virus contained in aerosol particles,” he said.

These results might partly explain why flu transmission is lower during the summer, when people spend more time outdoors in the sun. “It may be due to a combination of the fact that sunlight actually degrades the virus, and also that vitamin D has been shown to be effective in fending off infections,” Dr. Dabisch said. His team and others are currently conducting research to determine whether sunlight also destroys the Covid-19 virus, or mitigates its effects.

While few scientists believe that the sun will prove to be a magic bullet against the pandemic, medical research already amply demonstrates that exposure to sunlight can help to make us happier and healthier at a time when we are in need of both.