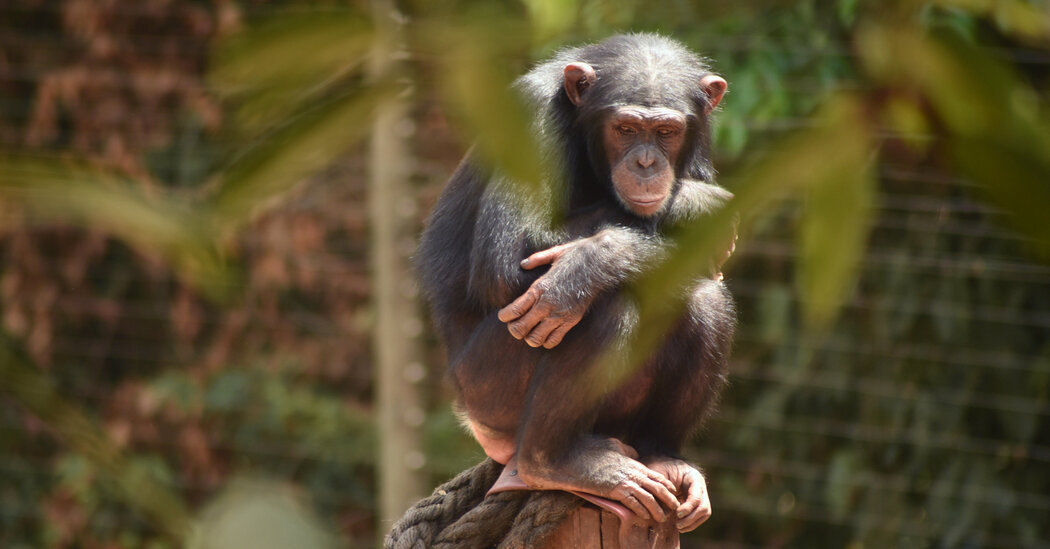 Chimpanzees had been dying mysteriously at the Tacugama sanctuary in Sierra Leone for a decade or so by 2016 when Tony Goldberg set to work on figuring out why.

The sanctuary staff, veterinarians and biologists had conducted several investigations into the disease over the years. It was not contagious, did not infect humans, did not appear at other sanctuaries, but killed chimps at Tacugama in an unmistakable, alarming pattern.

“It was always in the same season and always the same symptoms,” said Andrea Pizarro, the conservation manager at the sanctuary. The chimps would show what seemed to be neurological symptoms: lack of coordination, difficulty walking and seizures. They would also exhibit signs of gastrointestinal distress, like distended abdomens and vomiting. If the syndrome appeared, not one afflicted chimp survived.

Sometimes, chimpanzees that seemed fine one day were found dead the next, something that happens in all sanctuaries and presumably in the wild as well. But over the years, tests after death had shown the same pattern of intestinal damage as the chimps that showed symptoms.

The sanctuary, a major tourist attraction and the only place for orphaned chimps in Sierra Leone, houses an average of a little more than 90 chimps. These are Western chimpanzees, a critically endangered subspecies. Fifty-six chimps at Tacugama have died from this mysterious disease, in a country that recently made the chimpanzee its national animal.

What made the mystery even more puzzling was that the pattern of disease occurred only at Tacugama. Chimps fell ill and died at other sanctuaries, of course, sometimes suddenly, but the peculiar pattern of this illness occurred in only one place. Several investigations that focused on viruses or toxic plants produced no clear answers.

In 2016, Dr. Goldberg, an epidemiologist and veterinarian at the University of Wisconsin, Madison, and head of the Kibale EcoHealth Project, was approached by the Pan African Sanctuary Alliance to try to solve the mystery. He and his colleagues at Wisconsin joined forces with other veterinarians and biologists in Africa and elsewhere to undertake a comprehensive analysis of blood and tissue from the dead chimps that had been frozen at a nearby hospital.

“It took me five years,” he said. On Wednesday, he and other researchers reached a landmark in their veterinary detective work with a report in Nature Communications that identified a new species of bacteria clearly connected to the syndrome.

So far, the research has not found the bacteria to be the sole cause of the disease, but it has opened a new window on the bacterial genus Sarcina, which may include more unidentified species that threaten the health of humans and animals.

Dr. Goldberg emphasized that this was not a pandemic in the making. The bacterium is not contagious, and it is not about to cause widespread harm.

From the start, nothing about the study was straightforward, including getting the raw materials for the research to the lab. Dr. Goldberg credited Ismail Hirji, a Canadian veterinarian in private practice who was the sanctuary’s clinical vet in 2016, with overcoming those initial obstacles. “He just moved mountains to get these samples out of Sierra Leone,” Dr. Goldberg said.

The first hurdle involved the application process for permits to transport samples of diseased tissue taken from an endangered species. The paperwork took about a year, Dr. Hirji recalled.

On the day the samples were to be shipped, a needed police escort failed to show up. Dr. Hirji and others made a last-minute dash by car and small boat, because the ferries that usually carry travelers to the airport had closed. In the boat, he said, “We were essentially carrying 30 kilos of samples on our heads.”

Despite encountering more difficulties at the airport, including a lack of cold storage, the group finally got the samples on a plane to Dr. Goldberg’s lab in Wisconsin.

Next, researchers began an extensive screening of blood and tissue from healthy and sick chimps for viruses, bacteria and parasites, using genomic studies, visual examination of the tissue and other techniques.

Leah A. Owens, a candidate for a Ph.D. and a veterinary degree working in Dr. Goldberg’s lab, started concentrating on bacteria after initial DNA surveys showed only one likely culprit, a bacterium that was in 68 percent of the samples from sick chimps but none from healthy chimps.

Ms. Owens tried growing the bacterium in culture, sending it to other labs for sequencing, looking for it in tissue samples. Almost impossible to grow in the lab, the bacterium finally proliferated in a smear of brain tissue. Under a microscope, the tissue revealed the common shapes of bacteria, spheres and cylinders. And then, she said, “I get to this one that just is nutso looking.”.

“When you look at it straight on, it looks like a four-leaf clover,” she said, but it is actually a cube of four spheres.

That indicated that it belonged to the genus Sarcina, which had included only two known species. One lives in the soil and the other, first identified in 1844, is called Sarcina ventriculi and was known to cause gastrointestinal symptoms in humans and animals like those the Tacugama chimps suffered.

In humans, Sarcina ventriculi can thrive after surgery and produce gas that fills the walls of the intestine. Once the infection reaches that stage, people almost always die.

The technical term, Dr. Goldberg said, is emphysematous gastroenteritis, and “that’s what the chimps had.”

As Ms. Owens investigated further, it became clear that the bacterium in the chimp samples, including in the brain tissue, where an intestinal bacterium certainly did not belong, was not the same as the species reported in humans and animals over many years. It was bigger and its genome had significant differences.

The researchers proposed in their paper that the new species be named Sarcina troglodytae, because it was found in chimpanzees, Pan troglodytes.

Before the proposed name can be accepted as an official new species, researchers need to grow the bacteria more successfully. At this stage, they have shown only that the bacteria are associated with the disease, but not its cause.

And the disease still emerges mysteriously. The syndrome always peaks in March, during the dry season, for example. Keeping the chimps inside in the afternoon seems to help prevent it. And something in their diet or their surroundings may also play a role.

The researchers have, however, offered potential treatments. One drug that may be effective is omeprazole, the ingredient in Prilosec, which reduces stomach acid — an environment in which the bacterium thrives.

Some antibiotics are more effective than others. Ms. Pizarro, the manager of the sanctuary, said one chimp started to develop the syndrome last week, but they have given it antibiotics and other treatments and it is now doing well. The syndrome can, however, still kill after what looks like a recovery.

The new bacterium, or others like it, may be more widespread than scientists have realized, Dr. Goldberg said. Sarcina bacteria have not been subjected to a lot of research. The illnesses and deaths in humans and animals attributed to Sarcina ventriculi may actually be caused by the new bacterium, or similar species. If so, this is a group of bacteria that merit more attention.

“It falls into the category of things we should watch,” he said, “but not fret about.” No Sarcina pandemic is likely to be in the offing, he said.

But Dr. Goldberg said he would not be surprised if, “in retrospect, we recognize that a lot of human and animal diseases we’d attributed to other things are actually being caused by versions of this bacteria.”