You Are Here Home Health News Listening During a Pandemic 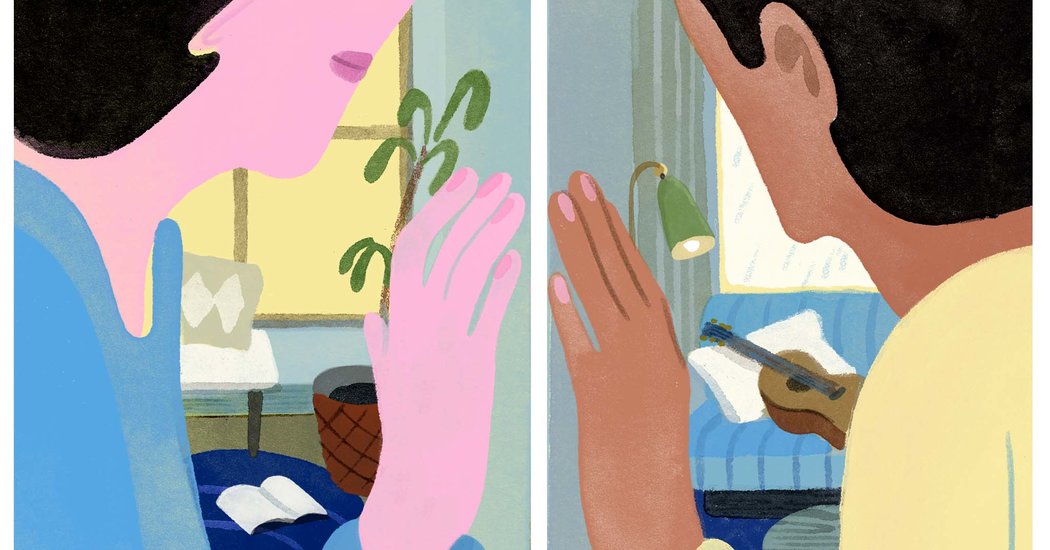 Crises have a way of shining a klieg light on the quality and depth of one’s relationships. Following major hurricanes, severe winter storms, electrical outages and terrorist attacks such as 9/11, there tends to be an uptick in divorces and breakups, as well as marriages and pregnancies. Lawyers and demographers are already predicting a wave of Covid-divorces and coronababies as the pandemic has the potential to both bring us together and drive us apart.

Relationships, romantic and otherwise, are rewarding and resilient when both parties feel heard and understood. The trouble is that listening is a skill few diligently practice even in the best of times, and it can really fall by the wayside during periods of uncertainty, hardship and stress. Family members, friends and colleagues may retreat into themselves, become easily distracted or maybe get too analytical, critical or pedantic in a subconscious attempt to control the conversation when all else is uncontrollable. The result is disconnection, alienation and even aggravation precisely when we need each other the most.

With the world effectively on pause, now is a unique opportunity to listen to those close to you, or to those you wish were closer to you. Confined as most of us still are and with our normal routines disrupted, we are literally captive audiences.

Whether in-person or on the phone, listening is how you develop understanding, strengthen ties and show you care. And it’s also how you know when you’ve heard enough and it’s time to give each other some space.

[Why Zoom Is Terrible]

To be sure, there’s more to listening than just being quiet so the other person can talk. People aren’t devices where you can just press “play” and they will share their innermost thoughts and feelings with you. Intimacy is earned through patience, sensitivity and meeting people where they are.

Stephanie Anderson used long car rides with her father as opportunities to listen. This was in the mid-aughts, when her father would drive her from their home in Youngstown, Ohio, to Washington, D.C., where she was attending George Washington University. “It was very conscious on my part,” said Ms. Anderson, now an instructor of student professional development in the college of business at the University of Illinois at Chicago. “It’s not my dad’s forte to be a big communicator.”

On previous trips, she had sat on the passenger side texting her friends while her dad listened to music by his favorite artists: Johnny Cash, Barbra Streisand and Neil Diamond. “I started with the music,” Ms. Anderson said. “I asked him when he began listening to those artists, what he liked about them and whether he ever went to any concerts.” His answers led to more questions, and he began to ask her questions. They talked about how he met her mother, who died when she was 8. They talked about his career and what kind of career she might like, each topic leading to another.

“I hadn’t had a very close relationship with my dad before that, aside from him being a great provider,” said Ms. Anderson. “But this was more me knowing him as a person who had dreams and motivations. It wasn’t transactional. It was about how he was experiencing life.” These days, she said she looks forward to her daily “quarantine call” with her dad, who now lives in Florida.

By using her father’s music as a jumping off point years ago, Ms. Anderson was, without realizing it, employing a tactic known as “third things.” The term was coined by the Quaker educator and author Parker Palmer and refers to things external to the two people talking, which can serve as springboards for connection. It has to do with the fact that people tend to be more comfortable backing into disclosure. The poet Donald Hall described how third things were the linchpins of his 23-year marriage to the poet Jane Kenyon. “We did not spend our days gazing into each other’s eyes,” he wrote, “We did that gazing when we made love or when one of us was in trouble, but most of the time our gazes met and entwined as they looked at a third thing.”

Start out by talking about something the other person likes, or maybe doesn’t like, and finding out why that is. It could be music, art, books, films, food, favorite childhood toys or even other people. The point is to explore one another’s affinities, attitudes, beliefs and opinions — but never argue about them. As the Polish-born social psychologist Robert Zajonc wrote, “We are never wrong about what we like or dislike.”

Likes and dislikes develop through experiences, and those back stories are willingly told if you ask questions and listen carefully to the answers. These don’t necessarily have to be long, drawn-out conversations. Indeed, Ms. Anderson said she and her dad didn’t spend the entire five-hour drive from Youngstown to D.C. talking — just sporadic, meaningful exchanges here and there. Careful listening requires focus and effort. You can only keep at it for only so long. So it’s important to be alert to the other person’s, and your own, willingness to continue. If you’re unsure, just ask: “Had enough?” or “Shall we pick this up later?”

Perhaps as illuminating as the use of third things is listening to how people respond to expansive hypotheticals such as “If you could time travel, where would you go?” or “If you could live to be 100 and you could retain either the brain or body of a 25-year-old, which would you chose?” Such imaginative flights can be a welcome escape when feeling stifled and hemmed in at home. People’s answers and their reasoning may surprise you, even when they are people you think you know well.

For anyone to want to tell you anything, you have to not only extend the invitation, but also respond in a thoughtful, feeling way. Regrettably, most people aren’t very good at this. Graham Bodie, a professor of integrated marketing and communication at the University of Mississippi in Oxford, has studied listening for almost 20 years, and his data suggests listeners’ responses are emotionally attuned to what speakers say less than 5 percent of the time. Anyone who has shared something personal and received a thoughtless or uncomprehending response knows how it makes your soul want to crawl back in its hiding place.

That’s not to say your responses have to be in-depth emotional analyses. David Wynn, a retired telecommunications manager in Anaheim, Calif., said one of the best listeners he has ever known was a co-worker and dear friend who died in 2017. While his friend’s responses were not necessarily profound, they were nevertheless spot on, even if it was to just exhale heavily and utter a profanity in sympathy with what Mr. Wynn was going through. “That was all I needed,” said Mr. Wynn. “He always got what I was saying.”

More often, though, people respond by shifting the conversation to themselves (“You think that’s bad? When I …”) or by telling the other person what they should do (“If I were you…”). And sometimes people change the subject entirely because they are uncomfortable with the other person’s emotions.

“I think most people don’t want to listen because they feel like once they hear something, they’re accountable for it,” said Pamela Soileau, a hospice nurse and chaplain in Houston. That’s especially true now, she said, when the problem we’re facing is as yet unsolvable.

“I’ve come to realize that there are times when you don’t have to say anything,” Ms. Soileau said. “Words are important, but they are not everything. Sometimes it’s just your presence and your willingness to listen that speaks volumes.”