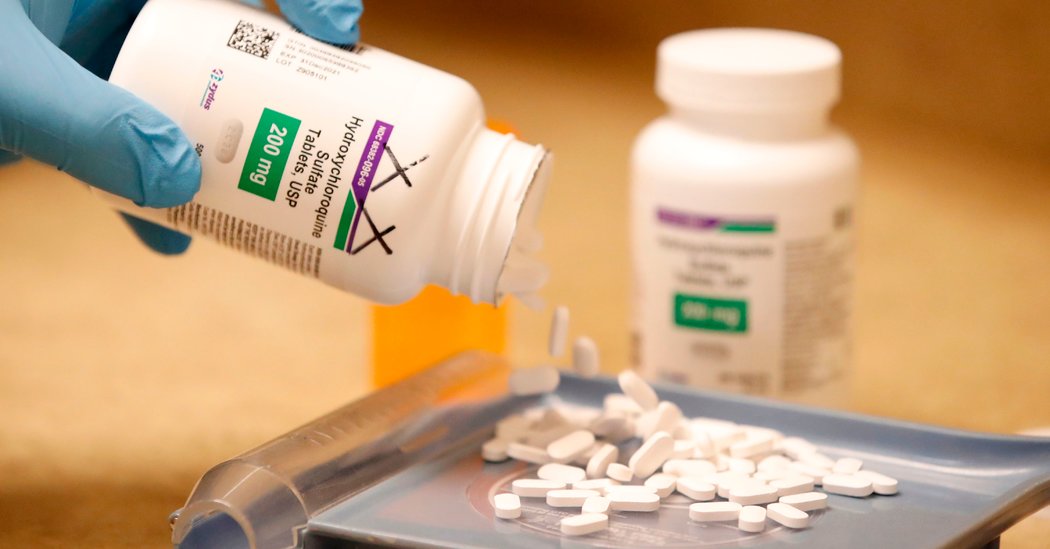 The malaria drugs hydroxychloroquine and chloroquine did not help coronavirus patients and may have done harm, according to a new study based on the records of nearly 15,000 patients who received the drugs and 81,000 who did not.

Some were also given the antibiotic azithromycin, or a related medicine.

Hydroxychloroquine is the drug that President Trump has advocated, and that he said he has been taking in hopes of preventing coronavirus infection.

People who received the drugs were more likely to have abnormal heart rhythms, according to the study in the The Lancet. They were also more likely to die. But the findings were not definitive, because the study was observational, meaning that the patients were not picked at random to receive the drug or not, and may have had underlying differences that affected their outcomes.

The findings match those of several earlier observational studies that also found no benefit and possible harm from the drugs, and that have led some medical centers to stop recommending their use.

The new study is based on data from 96,032 coronavirus patients from 671 hospitals around the world. The authors say it is the most comprehensive study to date. While acknowledging the limitations of observational studies, they write, “our findings suggest not only an absence of therapeutic benefit but also potential harm with the use of hydroxychloroquine or chloroquine drug regimens,” with or without antibiotics, in hospitalized patients with Covid-19.

Because of possible underlying differences between treated and untreated patients, this type of study cannot provide definitive evidence about drug safety and effectiveness. Even so, the authors recommended that the drugs not be used outside clinical trials, and they said carefully controlled trials were urgently needed.

Several clinical trials are underway around the world.

Hydroxychloroquine and chloroquine are approved to treat malaria and the autoimmune diseases lupus and rheumatoid arthritis. They have long been considered safe for those conditions — except for people known to have underlying disorders affecting their heart rhythm.

The drugs, sometimes combined with the antibiotic azithromycin, have been widely used to treat coronavirus patients in hospitals around the world, despite the lack of evidence that they help. Anecdotal reports of patients who seemed to improve and laboratory findings of a possible antiviral effect spurred use of the drugs, because there is no proven treatment for Covid-19 and doctors have been desperate to give severely ill patients some kind of therapy.

One month ago, the Food and Drug Administration issued a safety warning about both hydroxychloroquine and chloroquine, saying the drugs could cause dangerous abnormalities in heart rhythm in coronavirus patients, and should be used only in clinical trials or hospitals where patients can be closely monitored for heart problems. The National Institute of Allergy and Infectious Diseases made a similar warning, and also advised against combining the drugs with azithromycin outside clinical trials.

The findings of the new study did not suggest that the disturbances in heart rhythm caused the increased deaths that the authors observed, according to an editorial in The Lancet. The editorial said that some other property of the drugs might, in theory, worsen the illness, or that cardiac damage and low blood oxygen caused by the infection could make patients more vulnerable to dangerous rhythm abnormalities caused by the drugs.

Mr. Trump revealed on Monday that he had been taking hydroxychloroquine and continued to test negative for the virus. Later this week, he said the regimen would end within a day or two and he would stop taking it.