You Are Here Home Health News Manitoba issues $126,082 in tickets for those not following health orders 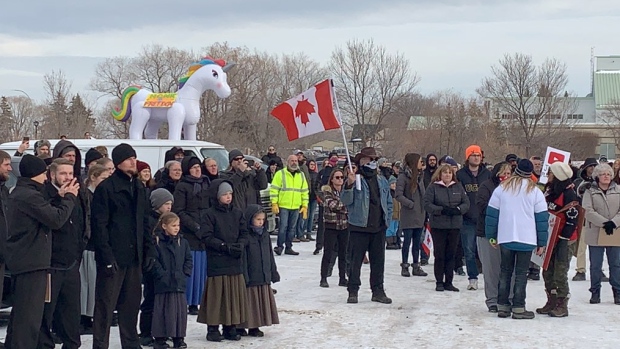 WINNIPEG — The Manitoba government announced Tuesday morning that there was a jump in tickets handed out last week compared to the previous one.

Enforcement officers handed out 95 tickets and 79 warnings between Nov. 16 and 22.

This is up from the 30 tickets handed out the week before.

Of the newest fines, nine $5,000 tickets were handed out to businesses, and another 55 tickets of $1,296 were given to individual Manitobans.

The province also noted 28 tickets for not wearing a mask in an indoor public place were written up, which is a fine of $298.

More tickets have also been handed out to those who attended a rally in Steinbach on Nov. 16. There have been a total of 16 tickets issued and more are expected to come.

One of those tickets were handed out on Nov. 21 to a person who also attended the rally at the Legislative Building in Winnipeg.

Officials are also investigating a church gathering that took place in Steinbach over the weekend. One person has been given a $1,296 fine and the province said more tickets are expected.

Premier Brian Pallister said enforcement officers were onsite, but only one ticket was issued.

“In the interests of not accelerating the situation, they did not hand out many tickets onsite,” said Pallister.

“They didn’t want to go into the church and then potentially create a more dangerous situation, a more violent situation, and so data was gathered, evidence was gathered and other tickets will be issued,” he said, noting an update will come next week.

Pallister also called out one Manitoba business who received a ticket. He said the Corona Hotel in Glenella, Man., was ticketed for having its beverage room open, and people were playing pool.

“Guys, don’t do things like that. This is disheartening,” Pallister said.

He also noted if businesses decide to break the public health orders, they better expect to be exposed and end up on television.

Pallister hopes one day, he won’t have to talk about the tickets that were issued.

“I long for the day we didn’t have to do this and I look forward to the day that there aren’t any tickets issued because people get the message.”