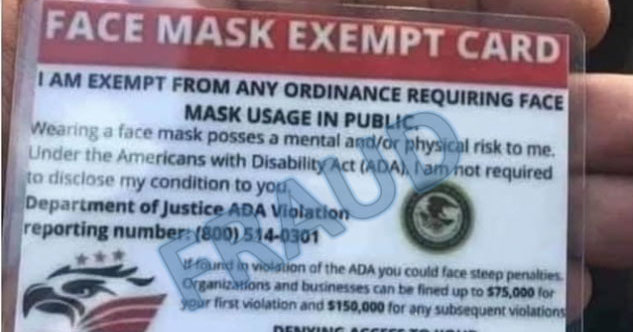 Cards for sale that claim to exempt people from wearing masks during the coronavirus pandemic are fraudulent, federal officials said.

The cards — featuring a red, white and blue eagle logo and approximately the size of a business card — say the bearer is exempt from ordinances requiring them to wear masks in public.

There’s also a warning that businesses or organizations can be reported to the Freedom to Breathe Agency, the group behind the cards. One version of the cards featured the Justice Department’s logo and listed a legitimate phone number where complaints about violations of the Americans with Disabilities Act can be submitted.

But such cards and fliers were not issued or endorsed by the Justice Department, federal officials said.

“Do not be fooled by the chicanery and misappropriation of the DOJ eagle,” said Matthew G.T. Martin, the United States attorney for the Middle District of North Carolina. “These cards do not carry the force of law. The ‘Freedom to Breathe Agency,’ or ‘FTBA,’ is not a government agency.”

Mr. Martin’s statement mentioned nothing about charges arising from the cards, and the group distributing them said no legal action had been taken against it.

The cards were created in response to complaints, the group’s communication team said in an email, and as “an educational tool” to help people “understand their legal and human rights so they can stand up to the unlawful, unscientific and unconstitutional mandates.”

The communications team declined to provide a named spokesperson, citing concerns over “the safety of our key members.” The group said it had received hundreds of reports and continued to get them daily from people who did not want to wear masks and because of that had been “denied access, discriminated, degraded, intimated and coerced.”

“These are people who have medical conditions where wearing a face mask puts them at significant health risk,” the group added.

The Centers for Disease Control and Prevention recommends wearing cloth face coverings in public places to help reduce the spread of the coronavirus. Footage of an episode on Friday at a Trader Joe’s store in California was the latest case of consumers resisting face mask policies at stores.

The founder of the Freedom to Breathe Agency, Lenka Koloma, advertised the cards on her Facebook page, and they were sold on a site created through the commerce platform Shopify. The site was unavailable on Sunday afternoon.

“Shopify takes concerns around the goods and services made available by merchants on our platform very seriously,” a company spokeswoman, Sheryl So, said. “We have multiple teams who handle potential violations of Shopify’s Acceptable Use Policy, including malicious and deceptive practices.”

The original Facebook group and a website on the Wix platform for the Freedom to Breathe Agency were also taken down. Facebook and Wix could not immediately be reached on Sunday.

The group behind the cards said it had requested support and information from Wix and that it had experienced “unlawful and unconstitutional censorship by Facebook.”

Facebook on Wednesday said it planned to combat coronavirus misinformation, by connecting people to credible information on its apps, investing $100 million in the news industry and supporting fact checkers.