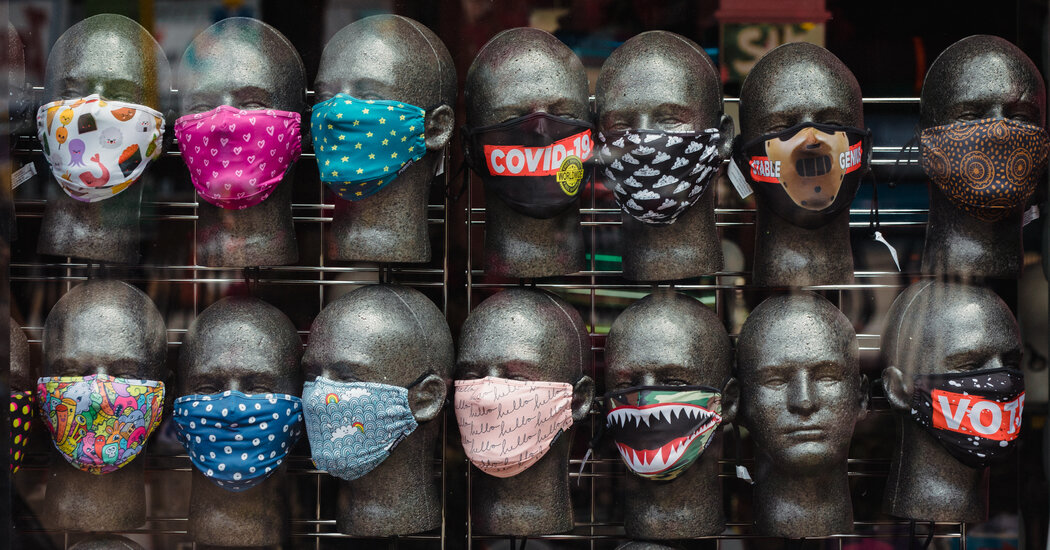 Researchers have long known that masks can prevent people from spreading airway germs to others — findings that have driven much of the conversation around these crucial accessories during the coronavirus pandemic.

But now, as cases continue to rise across the country, experts are pointing to an array of evidence suggesting that masks also protect the people wearing them, lessening the severity of symptoms, or in some instances, staving off infection entirely.

Different kinds of masks “block virus to a different degree, but they all block the virus from getting in,” said Dr. Monica Gandhi, an infectious disease physician at the University of California, San Francisco. If any virus particles do breach these barriers, she said, the disease might still be milder.

Dr. Gandhi and her colleagues make this argument in a new paper slated to be published in the Journal of General Internal Medicine. Drawing from animal experiments and observations of various events during the pandemic, they contend that people wearing face coverings will take in fewer coronavirus particles, making it easier for their immune systems to bring any interlopers to heel.

Dr. Tsion Firew, an emergency physician at Columbia University who wasn’t involved in the work, cautioned that the links between masking and milder disease haven’t yet been proved as cause and effect. Even so, the new paper “reiterates what we say about masks,” she said. “It’s not just a selfless act.”

Ideas about the importance of viral dose in the development of disease have cropped up in the medical literature since at least the 1930s, when two researchers formally noted that mice exposed to larger quantities of germs were more likely to die. More recently, scientists have gone as far as to puff different amounts of a flu virus up the noses of human volunteers. The more virus in this nasal plume, they found, the likelier the participants were to get infected and experience symptoms.

That sort of experiment can’t be done ethically for the new coronavirus, given how dangerous it is. But earlier this year, a team of researchers in China tried something similar in hamsters: They housed coronavirus-infected and healthy animals in adjoining cages, some of which were separated by buffers made of surgical masks. Many of the healthy hamsters behind the partitions never got infected. And the unlucky animals who did got less sick than their “maskless” neighbors.

Some indirect data has been accumulating from people as well. Researchers have tentatively estimated that about 40 percent of coronavirus infections do not produce any symptoms. But when some people wear masks, the proportion of asymptomatic cases seems to skyrocket, reportedly surpassing 90 percent during one outbreak at a seafood plant in Oregon. Wearing a face covering doesn’t make people impervious to infection, but these trends of asymptomatic cases could suggest that masks lead to milder disease, potentially reducing hospitalizations and deaths.

Particularly compelling, Dr. Gandhi said, is the data from cruise ships, which pack big groups of people into close quarters. More than 80 percent of those infected aboard Japan’s Diamond Princess in February — before masking had become common practice — came down with symptoms, she noted. But on another vessel that left Argentina in March, and on which all passengers were issued surgical masks after someone onboard came down with a fever, the level of symptomatic cases was below 20 percent.

Some independent experts say the paper is a welcome update, given the pervasive idea that wearing a mask is a mostly altruistic act.

“It’s been a real deficiency in the messaging about masking to say that it only protects the other,” said Charles Haas, an environmental engineer and expert in risk assessment at Drexel University. “From the get go, that never made sense scientifically.”

In other settings, too, from hospitals to hair salons, face coverings may have driven down rates of overall infection, perhaps preventing disastrous outbreaks. And countries like Japan, Taiwan and South Korea, where outbreaks quickly sparked a wave of widespread masking, managed to rein in the number of coronavirus-related hospitalizations and deaths early on.

Even in the United States, the slow upward tick in mask-wearing has coincided with what appears to be a more modest death rate, compared to the surge that occurred after the virus first made landfall in North America. These trends have also likely been influenced by increased testing, a downward shift in the average age of people contracting the virus and improvements in coronavirus treatments. Still, masks probably aren’t hurting things, Dr. Gandhi said.

The idea that face coverings can curb disease severity, although not yet proven, “makes complete sense,” said Linsey Marr, an expert in virus transmission at Virginia Tech. “It’s another good argument for wearing masks.”

Dr. Marr and other researchers are still sussing out exactly how much inbound or outbound virus different types of masks block. But based on a wealth of past evidence and recent observations, the amount that’s filtered out is probably high — perhaps 50 percent or more of the larger aerosols being sent in both directions, Dr. Marr said. Certain coverings, like N95 respirators, will do better than others, but even looser-fitting cloths can waylay some viral particles.

Still, some experts are not ready to embrace all ideas about two-way protection.

What’s outlined in Dr. Gandhi’s paper “is still just a theory, and needs more research,” said Nancy Leung, an epidemiologist at the University of Hong Kong. While there’s good evidence that masks reduce the spread of viruses within a population, it’s much harder to nail down how face coverings influence symptoms, Dr. Leung said, in part “because of the difficulty in conducting those studies.”

Dr. Gandhi acknowledged these limitations. But with no end to the pandemic in sight, the need for masks is only growing, she said, especially as researchers continue to document the virus’s ability to spread silently. Even people who don’t have symptoms can spray the virus into their environment when they sneeze, cough, sing, speak or even breathe. And those who fall ill may be at their most contagious in the days before the first signs of sickness appear.

To tame this pandemic, people should act as if they’ve been infected, “even if you feel right as rain,” Dr. Gandhi said.

Masks alone aren’t a substitute for other public health measures like physical distancing and good hygiene. But unlike sustained lockdowns that keep people apart, shielding our faces is easier and more sustainable, Dr. Gandhi said.

Safeguarding yourself and others from this deadly disease, she added, “is as simple as covering up the two holes in your face that shed the virus.”