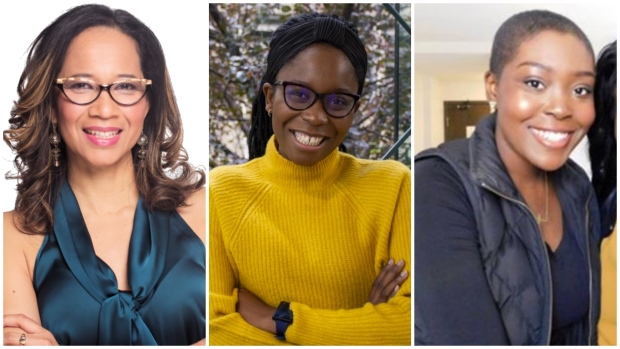 SASKATOON — An effort to increase stem cell donors within Black communities across Canada is being driven by a group of women who’ve had difficulty finding full genetic matches themselves.

Genetic matches are crucial for patients in need of stem cell transplants, such as those with leukemia and lymphoma, and matches are more commonly found within their own racial, ethnic and ancestral groups.

But the new Black Donors Save Lives campaign notes that fewer than two per cent of those in the Canadian Blood Services stem cell donor registry are Black.

“And that decreases their chance of finding a match,” campaign lead Sylvia Okonofua told CTVNews.ca in a phone interview. “It becomes a numbers game for Black people on the stem cell waiting list, where it’s like finding a needle in a hay stack for them.”

The recent University of Regina biochemistry graduate, with sights on becoming a hematologist, timed the virtual campaign to kick off during Black History Month.

“It was overall frustrating to know that a patient from my community is so much less likely than other patients to be helped,” she told CTVNews.ca. “When you see that your people have a really, really low chance of being helped out, it takes you aback.”

Okonofua noted part of the campaign uses TikToks, shareable infographics, and even an original song to get the message out and reach a wide audience.

And she said part of the outreach involves having Black stem cell recipients talk about their experiences with the health-care system and speak to the historical mistrust the Black community has towards the medical community.

She founded her campus’ chapter of Stem Cell Club, a non-profit organization with chapters across Canada which recruits Canadians as potential stem cell donors.

Registration for Black Donors Save Lives can be done online, where participants between the ages of 17 to 35 can fill out a questionnaire and have a swab kit mailed to their address. After they swab the inside of their cheeks and send the sample back, if there is a person in need, 90 per cent of donors will be asked to donate stem cells very similar to the way a person would be giving blood.

But a big difference is the donor is given a growth hormone a week before donation in order to increase the number of stem cells, as well as the process taking four to six hours.

Alternatively, one out of 10 donors will be asked if they’d like to donate stem cells via bone marrow surgery, which can take place over a day.

In 2017, Revée Agyepong experienced firsthand the lack of Black stem cell donors, when she was diagnosed with sickle cell anemia, which can damage nerves and organs, including kidneys, liver and spleen and can be fatal if left untreated.

But Agyepong, who was born in Edmonton to Ghanaian parents, was fortunate to receive a stem cell transplant from her sister.

“It is such a blessing to have a match within your own family because the percentages are just so low,” she told CTVNews.ca by email. “I am so fortunate to have found a match in my family or else transplant would have been off the table for me.”

In fact, only one in four patients who need a stem cell transplant are able to find a matched donor within their family, with Black patients being less than half as likely as white patients to find a unrelated person they match with on a donor registry, according to the campaign.

‘THAT GIFT IS IN YOUR HANDS’

For Jamaican-Canadian Dorothy Vernon-Brown, who helped inspire this month’s campaign, the current efforts are deeply personal. In 2013, she was diagnosed with acute myeloid leukaemia and was heartbroken to discover there were no stem cell matches in Canada’s registry or internationally.

She ultimately received stem cells from her sister, who was a half-match, and has been spreading information to Black Canadians ever since, through her own advocacy group, Donor Drive for Dorothy.

“Stem cell transplantation is a miracle for patients, and I wish people knew how easy it is to be a stem donor,” she recounted on a Twitter thread for another stem cell awareness campaign. “You could give someone an opportunity like my sister gave me, to be around and live the life I want. People want to live, so if that gift is in your hands, I appeal to you to see it as something significant to do in your life.”

Okonofua and Vernon-Brown’s efforts are being aided by Dr. Warren Fingrut, a hematologist who’s the director of the aforementioned Stem Cell Club.

He told CTVNews.ca in an email he’s seen firsthand far too many patients from ethnic and racial minority groups in situations where they don’t have fully-matched donors and are forced to seek other treatments.

“I find this heart wrenching and I am very motivated to work to address this,” Fingrut said.

That led to him founding his non-profit a decade ago, which has gone on to recruit more than 20,000 Canadians as stem cell donors, with more than 55 per cent being non-white. But in cases such as Vernon-Brown and others, those figures need to be much higher.

“We started running national campaigns last year, focused on the recruitment of diverse peoples as donors, as well as males who are also preferred by transplant physicians (all else being equal) as they are associated with better outcomes for patients,” Fingrut explained.

“This campaign is one example of an initiative in the health-care sector, which seeks to address racial disparity impacting the care of Black patients,” he wrote, noting Black people “face many such disparities in access to care, and we want to see others in the health-care sector working with Black Canadians to tackle these issues and address them, in collaboration with Black communities.”

Okonofua hopes next Black History Month, they’ll be able to have in-person swabbing events in places of worship, community hubs, and cultural gatherings “to show how easy it is.”

Fingrut said this the first time his group has specifically targeted one racial group and hopes to expand it to other ethnic and racial communities including South Asians, Indigenous peoples, and those of mixed ancestry in the near future.