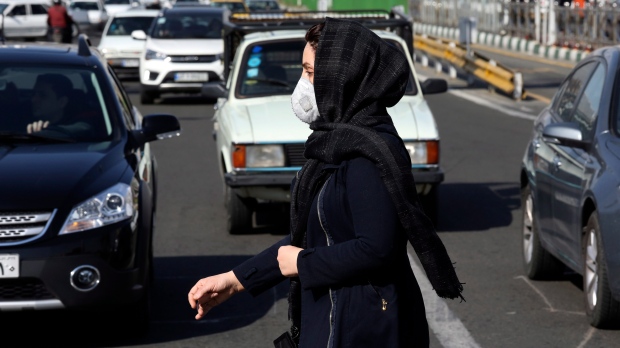 TEHRAN, IRAN — A 78-year-old member of the Iranian clerical body that chooses the country’s supreme leader has died from the illness caused by the new coronavirus, news agencies reported Monday. He was the latest of several senior Iranian officials to have been infected in the worsening outbreak.

The outbreak has infected nearly 14,000 people in Iran and killed more than 700, with the toll jumping by more than a hundred in the last 24 hours. The real numbers may be even higher, as some have questioned the government’s reporting.

Countries across the Middle East have taken drastic steps to try and contain the outbreak, with widespread closures of schools, universities and religious sites, the cancellation of public events and heavy restrictions on air travel.

For most people, the new coronavirus causes only mild or moderate symptoms, such as fever and cough. For some, especially older adults and people with existing health problems, it can cause more severe illness, including pneumonia.

The vast majority of people recover from the new virus. Those with mild illness recover in about two weeks, while those with more severe illness may take three to six weeks to recover.

In Iran, the semi-official Fars and Tasnim news agencies reported that Ayatollah Hashem Bathaei, a low-profile, moderate member of the Assembly of Experts, died from the COVID-19 illness.

The clerical assembly has the authority to appoint or remove the supreme leader, who has the final say on all major policies.

Supreme Leader Ayatollah Ali Khamenei, who is 80 years old and has been in power since 1989, wore disposable gloves at a recent public event, apparently as a precaution.

Cabinet ministers, members of parliament, Revolutionary Guard members and Health Ministry officials have been infected, compounding fears about Iran’s response to the global pandemic, which has infected nearly 170,000 people worldwide and killed more than 6,500.

The official leading Iran’s response to the virus on Sunday expressed concerns that health facilities could be overwhelmed if the rate of new cases continues to climb.

“If the trend continues, there will not be enough capacity,” Ali Reza Zali, who is leading the campaign against the outbreak, was quoted as saying by the state-run IRNA news agency.

Despite the mounting toll, many Iranians are shrugging off concerns about the virus. The streets of Tehran were bustling on Sunday, with many people out shopping in stores with little evidence of panic-buying.

Elsewhere in the region, the number of infections has continued to climb even as authorities have imposed strict travel and quarantine measures.

Israel on Monday said its total number of infections had climbed to 250, more than double what it was just a few days ago. Authorities have closed all malls, restaurants, cinemas, gyms and day care centres, and have urged anyone who can work from home to do so.

Pakistan reported a surge of 41 new cases in its Sindh province, which borders Iran. That brought its total number of infections to 94. Authorities there have closed schools and universities, and postponed an annual military parade planned for March 23.

Associated Press writers Joseph Krauss and Aron Heller in Jerusalem, and Munir Ahmed in Islamabad contributed to this report.