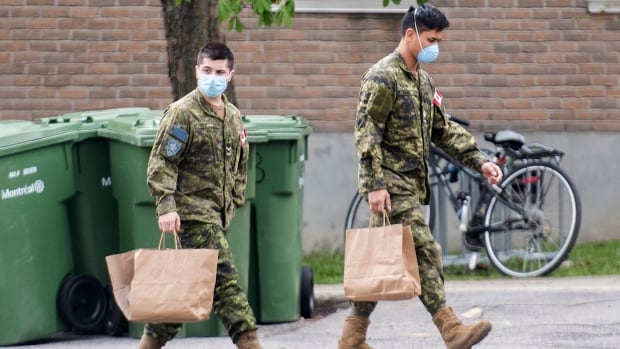 The Canadian military has drawn the curtain back on horrific allegations of elder abuse in five Ontario long-term care homes, with precise, graphic reports of residents being bullied, drugged, improperly fed and in some cases left for hours and days in soiled bedding.

Within the military’s shocking catalogue of abuse, neglect and cruelty is an accusation that delinquent care led to the death of a resident.

Soldiers were called into the facilities as part of an effort to backstop the provincial system, which has been overwhelmed by novel coronavirus cases.

What they found has been recorded in assessments of each of the homes — in Pickering, Scarborough, Etobicoke, North York and Brampton — and presented in a report to the Ontario government.

“It’s gut-wrenching,” said a grim-faced Premier Doug Ford Tuesday. “Reading this report is the hardest thing I have done as premier.”

According to the report, conditions in two of the seniors homes — Orchard Villa in Pickering and Eatonville Care Centre in Etobicoke — appeared to be nothing short of horrid and inhumane as ill-trained, burned-out and, in some cases, neglectful staff coped with the growing care needs of elderly residents.

It was in Orchard Villa that troops observed the choking death of one senior, who was lying down while being fed.

“Staff were unable to dislodge food or revive the resident,” said the report, which went on to conclude that the practice of not having patients sit up “appeared to have contributed” to the patient’s death.

In the same centre, according to the report, troops had to send a senior to hospital after the resident fractured a hip and was not cared for by staff. Other patients were “left in beds soiled, in diapers, rather than being ambulated to the toilets.”

Staff members were overwhelmed and burned out, the report said.

“Respecting the dignity of patients is not always a priority,” it said.

The report details conditions at five facilities where troops have been helping out:

At the Eatonville Care Centre, soldiers reported “witnessing aggressive behaviour” by staff — reports that prompted an investigation by facility management.

It was there that troops also reported seeing the drugging of patients whom staff claimed were “difficult or agitated.”

“But when you talk to them they just say they’re ‘scared and feeling alone like they’re in jail’ — no agitation or sedation required,” the report said.

At the Altamont Care Community in Scarborough, said the report, residents faced “inadequate nutrition” because most of them were not getting three meals a day — and when they did, “underfeeding was reported.”

It was also there that a “non-verbal resident wrote a disturbing letter alleging neglect and abuse” by a personal support worker. The letter was given to the military medic by the senior and the allegations were reported to the facility’s management.

Several of the assessments noted unsafe conditions that could help spread COVID-19, including instances where patients who had tested positive for the virus “were allowed to wander” and staff members left with inadequate personal protective equipment.

In his daily media briefing today, the prime minister said he was aware of the assessments and was saddened, shocked, disappointed and angered by what he’d heard.

The allegations were first reported in an online story Tuesday morning by Global News.

The military compiles daily situation reports on the deployment and the allegations first surfaced in those assessments in early May, within two weeks of troops beginning the deployment.

Doug Ford promises accountability and justice after the report describes ‘extremely troubling’ conditions in the homes. 1:26

Troops are obliged to report cases of abuse and mistreatment to the military chain of command or, if they are a nurse or a doctor, to their own health certification bodies.

The overall assessment, dated May 14, was compiled by the commander of the 4th Canadian Division, Brig.-Gen. Conrad Mialkowski, and forwarded on to National Defence Headquarters.

It did not arrive on Defence Minister Harjit Sajjan’s desk until a week later later, at which point other federal ministers were notified.

The Ontario government wasn’t formally notified until Sunday and the premier said he learned about the situation Monday night.

The report notes that the military’s concerns were raised with the management of each of the homes in “collegial manner” in a series of teleconferences, starting on May 4.

In the House of Commons today, the Conservatives accused the Liberal government of foot-dragging. The federal NDP, meanwhile, called for a thorough investigation of every allegation “and criminal charges where appropriate.”

The Department of National Defence refused to comment, saying that the Ontario government is responsible for the institutions.

“On reading the deeply disturbing report, I had obviously a range of emotions of anger, of sadness, of frustration, of grief,” Trudeau said. “It is extremely troubling, and as I’ve said from the very beginning of this, we need to do a better job of supporting our seniors in long-term care right across the country, through this pandemic and beyond.”

Trudeau said the report underscores the need to improve standards of care for seniors in long-term care homes across the country, and said the federal government will support the provinces’ efforts to do that going forward. Long-term care falls under provincial jurisdiction.

“We need to do a better job of caring for the people who built this country,” Trudeau said. “The greatest generation saw us through World War Two. We need to be there to support them properly through this global crisis.”

Over 1,675 troops have been brought in to backstop five long-term care homes in Ontario and a further 25 in Quebec. Their duties include helping residents with day-to-day needs, cleaning the facilities and meal distribution.

It is unclear whether similar abuse allegations have been levelled at long-term care facilities in Quebec. The federal Public Safety department has said a similar assessment is being prepared for that much larger operation.

Trudeau said Ontario and Quebec have asked that the deployment of troops in long-term care homes be extended until the end of June.

A Department of National Defence slide deck presentation, released along with the assessments, shows the Ontario government has a total of 27 seniors homes “critically affected” by the pandemic and provincial authorities want the military to move to different facilities as existing ones are stabilized.

A class action lawsuit was filed on Monday against the Orchard Villa, alleging the spread of COVID-19 in the home was “a needless tragedy which has now caused 77 deaths and over 200 infections of residents.”

A copy of the statement of claim was obtained by CBC News. None of the allegations have been proven in court.

“Orchard Villa was not prepared for the outbreak of COVID-19 and did not have adequate policies and procedures in place to prevent the spread of COVID-19,” said lawyer Gary Will, who filed the class action suit.

“The results of this incompetence were devastating to the residents of Orchard Villa.”

Sylvia Lyon, of Pickering, Ont., lost her mother Ursula Drehlich, a resident of the home, on April 23 and will act as the lead plaintiff in the case.

The suit alleges Orchard Villa continued to allow residents to sit together for meals after the Ontario government had issued strict guidelines on physical distancing in late March.