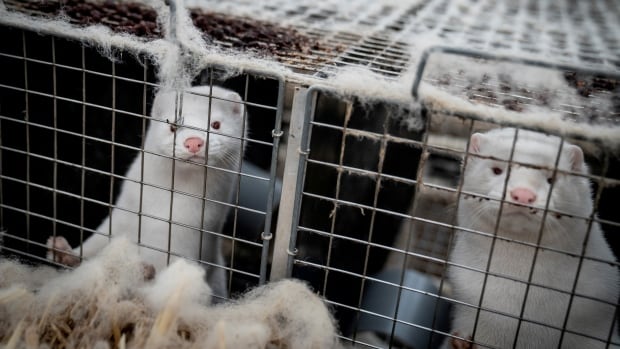 Five mink samples at a farm in B.C.’s Fraser Valley have tested positive for SARS-CoV-2, the virus that causes COVID-19 in humans, fuelling concerns of possible new mutations of the coronavirus.

The province’s agriculture ministry says the results were expected after eight workers on the farm tested positive last weekend.

Health officials sent the mink samples for testing to the National Centre for Foreign Animal Disease in Winnipeg. The World Organisation for Animal Health (OIE) has been notified of the results under international reporting requirements.

Minks are ferret-like animals that are farmed around the world for their fur. As of 2017, there were more than 200 farms across Canada.

Last month, the Danish government ordered all farmed minks to be culled, after finding that 12 people had been infected by a unique mutated strain of the coronavirus that causes COVID-19, which passed from humans to minks, then back to humans.

If minks are infected, there’s the potential for the virus to mutate within the mink population, which has been seen elsewhere.

“A lot of those mutations that they’re finding potentially relate to that spike protein, which is obviously concerning because that’s the vaccine target that’s being developed,” Adelman said.

The province says samples are being tested to determine the genome sequencing and the strain of the virus. Results are expected later this week.

B.C.’s chief veterinarian has placed the farm under quarantine and banned the movement of animals and materials from the property.

The province says a plan is in place to provide feed and care to the minks during the outbreak.

It says the outbreak at the farm does not pose a health risk to the dozen other mink farms in the region.

The World Health Organization has so far identified six countries that had reported SARS-CoV-2 in farmed minks: Denmark, the Netherlands, Spain, Sweden, Italy and the United States.