Obtaining the Campaigns list from the server has failed!
Server response:
CM Ad cahger Server plugin is not active on https://legendarygroup.co/admanager/
You Are Here Home Health News Moderna facility in Montreal area expected to produce 100 million vaccine doses by 2024 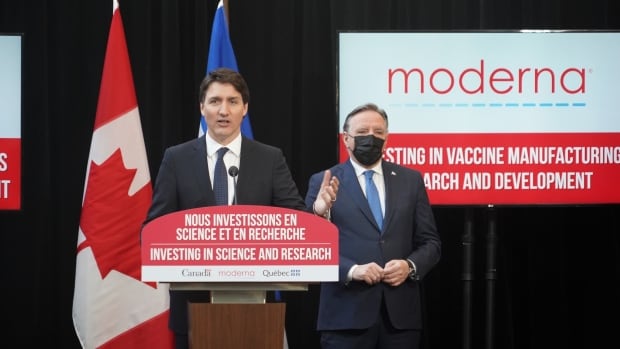 The American pharmaceutical giant Moderna confirmed Friday that it has chosen the greater Montreal area as the location for its new biomanufacturing plant — the company’s first outside of the United States.

The $180-million facility is expected to produce 100 million doses of mRNA vaccines per year.

“We are strengthening our own ability to respond to viruses.”

Details on its precise location are still pending. Minister of Innovation, Science and Industry François-Philippe Champagne, who was also present, said the company is still in the process of shopping around for potential sites.

Construction for the plant will begin sometime this year and is expected to be completed by 2024.

Legault said the plant will better prepare the province for future pandemics by reinforcing domestic supply chains and vaccine autonomy.

“We’ve had a hard two years,” he said. “We’ve had to look for masks, medical gowns, and then vaccines. We have learned we are better served by ourselves.”

Canada’s biomanufacturing industry has declined, Legault acknowledged, but what remains is centred in Quebec and the Greater Toronto Area, both of whom were in the running for the plant.

“Today I’m pleased to announce that Quebec has won the battle for the Moderna facility.”

The facility will also include a research centre that will work in collaboration with researchers from McGill University, who have signed a partnership with the company, and will have the capacity to produce mRNA vaccines against other respiratory viruses including the seasonal flu. Funding for that research is expected to come from Moderna.

“For the first time in the history of medicine, we have a molecule that is an information molecule and that changes everything. It’s like going from Blockbuster to Netflix — it’s a change of paradigm,” said Bancel.

The company has signed a 10-year partnership with the federal government to operate the facility, he said.

“The government of Canada was one of our first global partners in the very early days of COVID,” Bancel added. “When I was raising money in 2020, we did not have the financial strength to get this industrial machine going, and Canada was one of the few countries here to help.”

Details of the agreement between Moderna and the Quebec and Canadian governments weren’t released. It’s still unclear how much public money will go toward financing the $180-million facility. A federal government news release on Friday said the parties were still working out the details of the deal.

Moderna signed an agreement of understanding with the federal government last August to bring such a factory to Canada. The final agreement is still in the process of being reached.