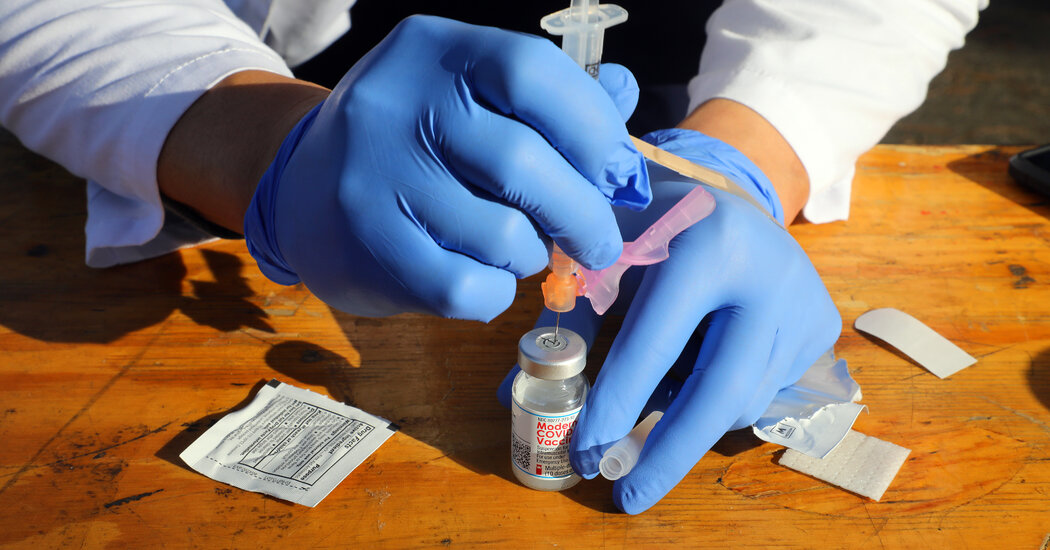 Moderna is asking United States regulators to approve what it says could be a remarkably simple proposal to speed up the immunization of Americans against the coronavirus: Fill empty space in its vials with as many as 50 percent more doses.

The Food and Drug Administration could decide in a few weeks whether to allow Moderna, a Massachusetts-based biotech firm that is the developer of one of the two federally authorized Covid vaccines, to increase the number of doses in its vials to up to 15 from 10. Moderna has been ramping up production of its vaccine, but the process of filling, capping and labeling millions of tiny vials has emerged as a roadblock. The company could produce more if regulators allow it to make fuller vials, Ray Jordan, a Moderna spokesman, said late Monday.

While it is not clear how quickly Moderna could adjust its production, any increase could be hugely welcome news in the campaign to curb a pandemic that has killed more than 443,000 people in the United States alone.

“This just makes a lot of sense,” said Dr. Nicole Lurie, who was the assistant health secretary for preparedness and response under President Barack Obama. If Moderna can use the same size of vial and the same production lines it is already running, she said, “it’s a relatively easy and straightforward fix.”

Moderna has delivered about 46 percent of the vaccine that has been administered so far in the United States, according to data from the Centers for Disease Control and Prevention. The remainder has come from Pfizer-BioNTech, the only other vaccine developer that has received emergency authorization.

Both vaccines require two doses, and both companies have promised to deliver 200 million doses by July. That would be enough to cover about three-fourths of the nation’s adults. If Moderna can deliver doses quicker, that timetable could speed up.

The Biden administration is searching for any way to bolster production, like addressing obstacles in the “fill and finish” phase of manufacturing. Although that nuts-and-bolts stage receives less attention than the process of making the vaccine itself, it has been identified for years as a constraint on production.

Moderna has discussed the possible change with the Food and Drug Administration but has not yet submitted manufacturing data to support it, people familiar with the discussions said. Federal regulators might be receptive to the idea of more doses in each vial, but they could balk at a 50 percent increase and instead approve a more modest number of extra doses.

The industry standard has long been 10 doses per vial, and federal regulators may be concerned that too many additional punctures by needles of the rubber covering of the vial and the time required to extract more doses could increase the risk of contaminating the vaccine with bacteria.

At some point, too much liquid can cause a vial to break. Moderna has tested what happens when it adds additional doses and determined that the limit is 15, according to people familiar with the company’s operations who were not authorized to speak publicly.

Moderna’s proposal for the five-dose increase was reported earlier by CNBC.

Packing more vaccine into each vial is one of a number of options that White House and health officials are exploring as they push to expand production before the spring, when officials are expecting a renewed surge of infections from emerging variants of the coronavirus. Some ideas, such as combining fractions of doses left over in vials, have been proposed and dismissed.

Pfizer is unable to increase the amount of vaccine in its vials because its manufacturing is geared toward a particular size of vial that can hold only about six doses. Moderna’s vial is large enough to hold more than the 10 doses that are currently allowed, so it could add more without creating a new production line.

When asked about Moderna’s proposal, a White House spokesman said on Monday that “all options are on the table.”

Prashant Yadav, who studies health care supply chains at the Center for Global Development in Washington, said Moderna might be able to “relatively quickly” make more of its vaccine if it received the green light to add doses to each vial.

Currently more than 150 million people — almost half the population — are eligible to be vaccinated. But each state makes the final decision about who goes first. The nation’s 21 million health care workers and three million residents of long-term care facilities were the first to qualify. In mid-January, federal officials urged all states to open up eligibility to everyone 65 and older and to adults of any age with medical conditions that put them at high risk of becoming seriously ill or dying from Covid-19. Adults in the general population are at the back of the line. If federal and state health officials can clear up bottlenecks in vaccine distribution, everyone 16 and older will become eligible as early as this spring or early summer. The vaccine hasn’t been approved in children, although studies are underway. It may be months before a vaccine is available for anyone under the age of 16. Go to your state health website for up-to-date information on vaccination policies in your area

You should not have to pay anything out of pocket to get the vaccine, although you will be asked for insurance information. If you don’t have insurance, you should still be given the vaccine at no charge. Congress passed legislation this spring that bars insurers from applying any cost sharing, such as a co-payment or deductible. It layered on additional protections barring pharmacies, doctors and hospitals from billing patients, including those who are uninsured. Even so, health experts do worry that patients might stumble into loopholes that leave them vulnerable to surprise bills. This could happen to those who are charged a doctor visit fee along with their vaccine, or Americans who have certain types of health coverage that do not fall under the new rules. If you get your vaccine from a doctor’s office or urgent care clinic, talk to them about potential hidden charges. To be sure you won’t get a surprise bill, the best bet is to get your vaccine at a health department vaccination site or a local pharmacy once the shots become more widely available.

That is to be determined. It’s possible that Covid-19 vaccinations will become an annual event, just like the flu shot. Or it may be that the benefits of the vaccine last longer than a year. We have to wait to see how durable the protection from the vaccines is. To determine this, researchers are going to be tracking vaccinated people to look for “breakthrough cases” — those people who get sick with Covid-19 despite vaccination. That is a sign of weakening protection and will give researchers clues about how long the vaccine lasts. They will also be monitoring levels of antibodies and T cells in the blood of vaccinated people to determine whether and when a booster shot might be needed. It’s conceivable that people may need boosters every few months, once a year or only every few years. It’s just a matter of waiting for the data.

But he said it would not be an instant change. “I don’t think Moderna has a surplus sitting around,” he said.

Dr. Lurie, an adviser to the Coalition for Epidemic Preparedness Innovations, known as CEPI, said that during the federal government’s H1N1 swine flu response, the fill-and-finish issue caused a “huge bottleneck” with a limited supply of vaccines.

She said there were discussions at CEPI early in the coronavirus pandemic about what the appropriate vial size would be for mass vaccinations: five, 10 or 20. Last year, global glass vial shortages loomed over negotiations between the federal government and vaccine manufacturers, adding more stress on pharmaceutical companies developing coronavirus vaccines.

Mr. Yadav said the finish-and-fill process was automated to prevent contamination and ensure precise dosing to the microgram. At top speed, as many as 1,000 vials of vaccine can be filled each minute, he said.

A 15-dose vial carried a trade-off, he said. It could lead to more waste if the health care professional runs out of people to inoculate and has to discard the remaining doses. But during a raging pandemic, experts said, that might be a risk that federal health officials would be willing to take.

Dr. Moncef Slaoui, who helped lead the Trump administration’s vaccine development program and is a consultant to the Biden administration through next week, said other major pharmaceutical companies like Merck or GlaxoSmithKline might be able to assume some of the burden of the fill-and-finish stage.

“That is a more generic type of manufacturing activity,” he said.

The French drugmaker Sanofi announced last week that starting this summer, it would help produce more than 100 million doses of the Pfizer-BioNTech vaccine to meet demand in Europe. Company officials said Sanofi would fill and pack vials at a Sanofi plant in Frankfurt near BioNTech’s German headquarters. BioNTech, Pfizer’s German partner, designed the vaccine.