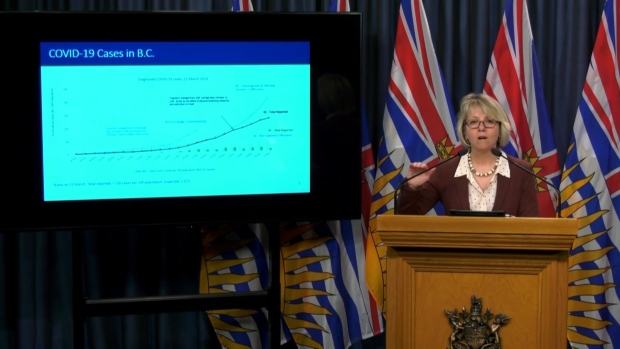 VANCOUVER — New modelling on the spread of COVID-19 in British Columbia suggests the provincial government can relax some of its physical distancing measures while keeping new cases and hospitalizations at a manageable level.

Provincial health officer Dr. Bonnie Henry released updated data on B.C.’s fight against the virus on Monday, including three scenarios predicting what might happen should the government let people increase the amount of contact they have with others outside their home.

Under the existing measures, Dr. Henry said people are currently down to about 30 per cent of their usual contacts. The modelling indicates if that were to increase to 40 per cent, or even double to 60 per cent, the number of new infections would remain relatively stable.

“That shows us that we might see increased number of cases and some hospitalizations over time in the coming weeks but they would be manageable,” Dr. Henry said. “And there are things we can do that makes these types of contacts – these increased contacts with people – safer as well.”

However, if the government were to allow people to resume 80 per cent of their normal contact outside the home, the modelling suggests the number of cases would skyrocket, repeating and quickly exceeding the steep increase in infections that was recorded in early March.

“The more potential for transmission between people means that the virus will be able to increase exponentially and we might be in a situation that we’ve seen in other places in the world where we have a rapidly increasing outbreak, rapidly increased number of people who need hospitalization,” Dr. Henry said.

“And so our challenge, and our work together, is to find that sweet spot somewhere around increasing our contacts by at least half, or twice as many as we have now, but without allowing those opportunities for exponential growth of the virus within our communities.”