You Are Here Home Health News New Zealand and Australia were COVID-19 success stories. Why are they behind on vaccine rollouts? 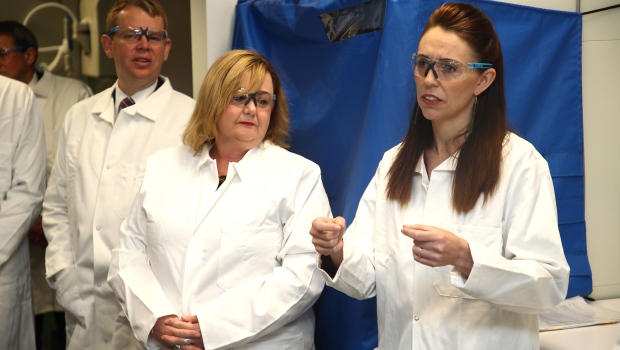 Over the past year, New Zealand has been celebrated for its handling of the COVID-19 pandemic.

As other countries battled months-long lockdowns and hospital systems on the brink of collapse, New Zealand imposed a five-week nationwide lockdown before returning to something resembling normality. Although borders have been closed to foreigners for more than a year, music festivals and weddings have gone ahead. The country has reported around 2,500 cases and 26 deaths.

It was a similar story in other parts of Asia-Pacific — so much so that when Australian think tank Lowy Institute scored more than 100 countries on their COVID-19 performance earlier this year, it found Asia-Pacific had, on average, been the most-successful region in the world at containing the pandemic.

The two worst regions, according to the Lowy Institute, were Europe and the Americas — and leaders in United States and United Kingdom, in particular, were seen as catastrophic failures in their handling of the pandemic.

But as the world enters a new phase of pandemic measures, the tables are somewhat turning.

Now, the U.S. and U.K. are leading the world in their mass vaccination campaigns, while some Asia-Pacific countries that won praise for containing the virus are lagging.

Already, 37% of Americans have received at least one dose, and CNN analysis estimates the country could achieve herd immunity through vaccines by the summer — something that would probably require 70% to 85% of people to be vaccinated.

The United Kingdom, which became the first country to administer a fully tested vaccine in December, has already at least partially vaccinated 47% of its population.

By contrast, New Zealand, Thailand, Taiwan, South Korea and Japan — all relatively successful at preventing large-scale outbreaks — have each vaccinated less than 4% of their populations. Australia, which once planned to have its population vaccinated by the end of this year, now says it won’t be setting any targets. As of April 12, Australia had vaccinated just 1.2 million people — less than 5% of its population. New Zealand is the second lowest in the OECD in terms of the number of COVID-19 vaccines administered.

The situation differs for each country, but experts say one reason is where they are in the queue — these Asia-Pacific countries just didn’t sign agreements with manufacturers for vaccines as early as others.

While leaders are defending their slow rollout, saying there’s value in waiting to see how the vaccines work in other countries that need them more, experts are urging them to speed up immunization or risk being left behind.

Meanwhile, outbreaks in Europe and the Americas spun out of control. Desperate to deal with the unfolding crises, some hard-hit countries began focusing their efforts on vaccines.

Robert Carnell, regional head of research for Asia-Pacific for financial services company ING, said countries that threw money at vaccine developers have since reaped the benefits.

“They took a calculated gamble with money,” he said. “That has paid off for the U.K..”

“They were driven by emergency and necessity to do anything that would get them off the hook that they had impaled themselves on,” said Bill Bowtell, an adjunct professor in public health at the University of New South Wales.

Countries in Asia-Pacific didn’t have the “same sense of urgency,” he said, adding that when Australia did sign contracts, it didn’t “back every horse in the race” like the U.K. — it spread its risk across fewer vaccine candidates and is now paying the price.

Jerome Kim, the director-general of Seoul-based non-profit, the International Vaccine Institute, said the U.K. and the U.S. made big bets before others, and the entire world was now facing an issue of vaccine supply. “If you think about it as a queue, (U.K. and the U.S.) are the first countries in the queue,” he said.

By December, countries like the U.K. and the U.S. had begun their vaccine rollouts. In parts of Asia vaccination efforts were at a similar stage. China began vaccinating key groups, such as medical workers, in December. In January, India — a major pharmaceutical manufacturer which has reported the second highest number of cases in the world — began what one of the world’s most-ambitious vaccination programs.

But in parts of Asia-Pacific, particularly places with low levels of coronavirus and limited vaccine development capabilities, inoculation has lagged behind.

As the months have gone on, that’s prompted criticism. New Zealand’s vaccine roll out has been labeled “shambolic,” while Australia’s has been called a “failure.” At the start of this month, South Korea’s newly elected Seoul mayor Oh Se-hoon criticized the government, saying it was late securing vaccines — and was the last among OECD countries at rolling them out.

But leaders have defended their response. Korea Disease Control and Prevention Agency (KDCA) said it wouldn’t rush to roll out vaccines to allow time to observe any side effects. Australia’s Prime Minister Scott Morrison said the country had benefited from having a “front row seat” to watch the vaccine rollout in other countries.

And in New Zealand, which has reported just 26 deaths, Prime Minister Jacinda Ardern said the equation is different as “our people aren’t dying.”

But the slow rollout wasn’t entirely intentional. In August, when Australia signed a deal for AstraZeneca doses, Morrison said: “Australians will be among the first in the world to receive a COVID-19 vaccine.”

Since then, the rollout has been beset by delays, though some were difficult to foresee. Morrison blamed the European Union for blocking early supplies of the AstraZeneca vaccine to Australia, but the EU denies that.

Australia, like South Korea, is locally manufacturing AstraZeneca, but the country is now recommending the vaccine only for those over 50 due to the risk of blood clots — younger people are being offered Pfizer, but there’s limited supply.

Helen Petousis-Harris, a vaccinologist at the University of Auckland and the co-leader of the Global Vaccine Data Network, a multinational consortium dedicated to collaboration in vaccine safety studies, said in Europe there is more chance of getting a blood clot from getting COVID-19 than there is from getting the AstraZeneca vaccine. That might not be the case in Australia where COVID-19 isn’t circulating widely in the community.

But other issues could have been avoided. Experts are critical of the poor distribution plans in New Zealand and Australia, especially when they’ve had more time than many countries to prepare.

‘(New Zealand hasn’t) had that pressure of having overwhelmed healthcare systems as well to contend with as well, so we’ve have ample time to get ready, and there are some things that should have been done much sooner,” Petousis-Harris said.

According to Bowtell, Australia’s the government failed to adequately provide for supply or distribution, despite having more time to focus on that than countries where health systems had been overburdened. And while a range of states and territories had responsibility for public health, the problem had been compounded by poor decision making at the federal level, he said.

When asked over the weekend why New Zealand’s vaccine rollout was lagging, New Zealand’s Ardern said the country had accepted it was never going to be the first to get the vaccine — and that wasn’t necessarily a bad thing.

“I support the fact that we have been later in the pecking order,” she told national broadcaster TVNZ saying it was important for developing countries to get the vaccine, too. “Until all of us are part of widespread vaccine programs, no one is safe. Because if there is COVID rife in any country, mutation occurs, that means it affects vaccine efficacy, it means no one is safe.”

Experts say there’s value to that logic — but it’s a balance.

Rich countries have been accused of hoarding vaccines, while AstraZeneca has been used of prioritizing deliveries to the U.K. Discussions of inequality have dogged the vaccine roll out — some well-off nations ordered many times more vaccines than are needed to vaccinate their people.

Kim, from the International Vaccine Institute, said many people thought vaccines should be given to countries with the most infections first. But there were challenges in doing that — countries that had reported the most infections also had widespread testing, so it was possible there were nations in desperate need of vaccines that didn’t have the testing to show the scale of their problem.

He was also skeptical over whether New Zealand had intentionally allowed other countries to get the vaccine first.

“If you did it actively out of an act of altruism, that’s amazing. If you did it because you didn’t have it … then it was a good thing that it happened that way, but I’m not sure that it has the same impact of giving up that place in line.”

Although countries with limited outbreaks didn’t need to be first off the rank, the majority of the world needs to be vaccinated, said Petousis-Harris. “If we don’t do it, we going to be stuck locked up. You do have to balance that against not taking anything more than what you need.”

As Bowtell put it, Australia has a moral obligation to help developing countries get the vaccine. It’s also in the country’s own interest not to have enclaves in the world where the virus could spread and mutate as those variants could make controlling the pandemic harder in the future.

Even so, he said, it was still important for Australia to vaccinate its own population, he said, comparing the situation to how flight crews recommended securing your own mask in an emergency before helping your child.

‘A RECIPE FOR DISASTER’

One reason countries need to roll out vaccines is to open up borders. For critics, the fear is that parts of Asia Pacific may still be closed off to the world while countries with widespread vaccination campaigns begin opening up for tourism and trade.

“As more countries vaccinate their populations, New Zealand risks being left behind,” said Chris Bishop, a politician from New Zealand’s opposition party. “The elimination of COVID-19 in New Zealand should have been an opportunity for us to recover more quickly than the rest of the world. We are at risk of wasting this through a slow and ineffective roll out.”

Wasting it seems unlikely. Countries in Asia-Pacific that handled their outbreaks well have avoided paying the huge economic and social cost that other nations overseas have paid, says Bowtell. ING’s Carnell noted that China and Taiwan actually grew their economies. The economies of South Korea, New Zealand and Australia were hit, but not as badly as other countries — their GDP declined 1%, 2.9%, and 1.1% in 2020, respectively, much smaller falls than the 9.9% seen in the U.K., for instance.

Experts are confident these countries can scale up their vaccines fast. And they need to — not just for the economy, but for global public health.

“In a country where 90% of people are not vaccinated, that’s just a recipe for disaster,” Bowtell said. “I don’t think you want to be an island of largely unvaccinated people in a world where COVID is mutating and changing so rapidly.”

“The virus is attacking the borders every day,” he said. “The strongest resilience and protection we can have is for our frontline workers to be vaccinated with the best vaccines, and then for the entire Australian population to be vaccinated.

“It’s a race against variations and time.”