You Are Here Home Health News No evidence hydroxychloroquine beneficial for treating COVID-19, could be harmful, study suggests 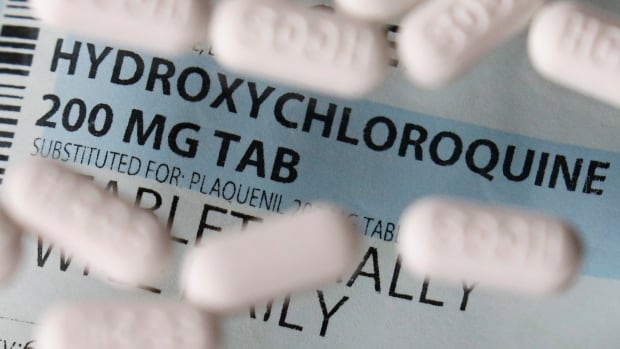 Researchers examining data from nearly 15,000 COVID-19 patients have found no evidence that taking hydroxychloroquine or chloroquine provides any treatment benefits and may be linked to an increased risk of serious heart complications, a study published in The Lancet says.

Chloroquine — normally used to treat malaria  — and the related drug hydroxychloroquine, which is often used to treat autoimmune diseases such as lupus or arthritis, have been the subject of furious debate in the race to find a treatment for COVID-19, fuelled in part by U.S. President Donald Trump’s repeated endorsements of the drugs, which have not been grounded in scientific evidence and have raised alarm among medical experts.

“This is the first large-scale study to find statistically robust evidence that treatment with chloroquine or hydroxychloroquine does not benefit patients with COVID-19,” Dr. Mandeep Mehra, the study’s lead author and medical director of the Brigham and Women’s Hospital Heart and Vascular Center in Boston, said in a news release on Friday.

Mehra and his team analyzed data from more than 96,000 patients hospitalized with laboratory-confirmed SARS-CoV-2 — the coronavirus that causes COVID-19 illness — between December 2019 and April 2020 in several countries, but more than half of the cases were in North America.

The researchers found that those who took chloroquine or hydroxychloroquine were more likely to develop serious cardiac arrhythmias, or irregular heartbeats.

They also determined that about one in 11 patients who hadn’t been treated with either chloroquine or hydroxychloroquine died in hospital, compared to death rates of about one in six for those who took the drugs.

However, the researchers cautioned that because this was an observational study and not a randomized control trial, which is the gold standard of medical research, they could not rule out the possibility that other factors that hadn’t been measured were responsible for the increased deaths.

Because the drugs have demonstrated antiviral effects in laboratory studies, chloroquine and hydroxychloroquine are still worth studying, the researchers noted, and said the need for randomized clinical trials is urgent.

“Randomized clinical trials will be required before any conclusion can be reached regarding benefit or harm of these agents in COVID-19 patients,” the paper said.

But until the results of those trials emerge, chloroquine and hydroxychloroquine should not be used to treat COVID-19 patients, the researchers said.

The news release from The Lancet also emphasized that chloroquine and hydroxychloroquine have a “good safety profile” when taken as prescribed for malaria and autoimmune diseases — and that the study findings, “do not imply patients should stop taking these drugs if they are prescribed for approved conditions.”