You Are Here Home Health News On Coronavirus, Americans Still Trust the Experts

For months, President Trump has been contradicting his public health advisers over the response to the coronavirus pandemic.

Over that same time, public health messages about the virus have been shifting. Advice that masks weren’t necessary changed to advice to wear masks. Guidance against mass gatherings was softened in the face of a recent wave of political protests.

Social media fights and news coverage have tended to focus on the maskless-and-angry; on large, risky public gatherings; and on harassment of public health officials. But a New York Times/Siena College survey shows a large majority of American registered voters quietly trust the advice of medical experts.

“I think there’s too much pessimism about American trust in science,” said Elizabeth Suhay, an associate professor of government at American University.

The poll shows that large majorities across the partisan divide trust medical scientists and the Centers for Disease Control and Prevention, though Democrats are more trusting than Republicans over all. The levels are similar to those found in public opinion surveys earlier in the pandemic, and in the years before it, suggesting that the politicization of the coronavirus response has not demolished the credibility of science. 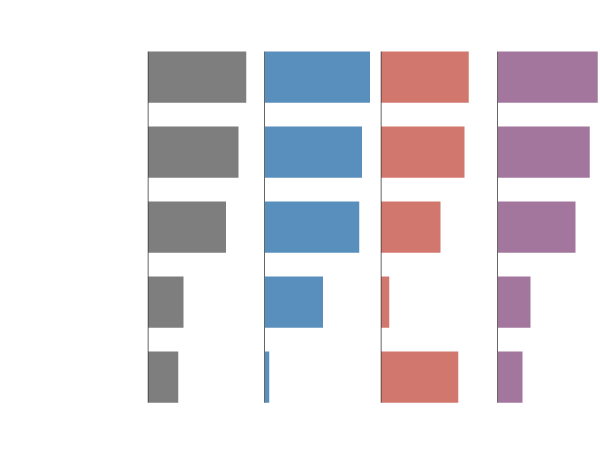 Based on a New York Times/Siena College poll of 1,337 registered voters from June 17 to June 22. Questions shown were asked of half of respondents. Those who did not identify with a major party are not shown.

Jonathan Ferguson, a real estate agent in Central Michigan and self-described conservative, says he has conservative friends who have resisted public health measures as infringements of their rights. But he has largely supported the actions of his governor, Gretchen Whitmer, a Democrat who imposed control measures over the objections of the president.

“When you have something that is so out of the box — a new global pandemic — it’s kind of like, Let’s get ahold of this and see where we are at,” said Mr. Ferguson, 39. “Our rights aren’t going anywhere.”

Even as trust in government and many professionals has been declining for decades, Americans’ trust in medical experts has tended to remain high. Gallup has shown consistently high rankings for nurses, doctors and pharmacists on measures of “honesty and ethics.”

The Pew Research Center, which has been studying trust in scientists since 2016, has seen consistently high scores for medical experts. Its most recent study, from May, showed 89 percent of Americans were confident that medical experts were acting “in the public interest.”

“We’re looking at a long-term decline in trust in institutions, including elected officials particularly, as well as the media,” said Cary Funk, who has led the Pew team. “This stands in contrast to that.”

But as people have chafed under the constraints of stay-at-home orders, and as coronavirus case numbers have started rising again, that stated trust in experts may face a new test. Some political scientists worry that, given the political overtones to the virus response and months of confusing or conflicting advice from experts, it may be hard to mobilize the public to follow public health guidelines in the way they did in the early months of the outbreak.

Evidence shows that trust is a good predictor of behavior — people who trust medical experts are more likely to heed their advice. That helps explain the widespread compliance with advice to shut down businesses and stay home, and with other policies devised to prevent the spread of coronavirus this spring.

But research also shows two key factors tend to dilute trust in public health: political polarization and mixed messages. Both are present in this crisis. Sarah Gollust, an associate professor at the University of Minnesota who studies the communication of health policy, worries the current levels of public trust may begin to erode. “The trends started out bad and are remaining bad,” she said.

The expert response to the disease has shifted as scientists have been learning about best practices in real time. Advice has changed on the value of masks, on whether asymptomatic patients can spread the disease, and whether the disease can easily spread via surfaces. Such confusing messages can cause people to throw up their hands and ignore any advice.

Jimmy Ballard, who works as a contractor and sells fireworks just outside Wichita, Kan., said he became skeptical of government health officials when they started discouraging people from wearing face coverings in February, and he has long been wary of the television news media. As a former E.M.T., wearing a mask to prevent disease transmission seemed obvious to him. Mr. Ballard, a registered Republican, plans to vote for the president’s re-election.

“I think they were trying to prevent a shortage for health care workers — and if that’d be the case, then just come out and say it,” said Mr. Ballard, 54. “Once you lie to me, I know you’re a liar. It’s pretty simple: Once bitten, twice shy.” He said, though, that he does trust his own doctor.

The pandemic has also been politicized almost from the beginning. President Trump has urged the use of unproven treatments, a faster reopening of businesses, and less reliance on testing. There are some clear links between his behavior and the behavior of partisans. His calls for the widespread use of an unproven malaria treatment drove up prescriptions for the drug. His disdain for masks appears reflected in comparatively lower rates of mask use among Republicans — though a majority of Republicans in the Times survey said they wear a mask at least some of the time.

Pew research has shown that people who rely on the White House for information on the virus tend to think the disease and pandemic are less dangerous than people who get their news from the national or local news media.

In May, more than 1,200 public health professionals signed an open letter supporting participation in large public protests in the aftermath of the George Floyd killing, an apparent reversal of earlier calls to avoid such mass gatherings.

In the face of those headwinds, the high levels of trust in scientists are remarkable. “I haven’t seen much evidence that trust in scientists or trust in the scientific community has eroded,” said Matt Motta, an assistant professor of political science at Oklahoma State University, who studies the intersection of politics and science. But he said he was still concerned about the future, particularly if a vaccine is approved, which would require widespread adoption to protect a community.

The Times survey shows some evidence that the politics of coronavirus could be having an effect. Even though people say they trust medical scientists in general, their trust of Anthony Fauci, the director of the National Institute of Allergy and Infectious Diseases, is now lower — and more partisan. Only 51 percent of Republicans trust him, while 81 percent of Democrats do.

And, consistent with other surveys, trust in the news media is low, especially among Republicans. Only 7 percent of Republicans say they trust the national news media to provide accurate information about the virus. That could be a problem, since far more Americans are learning about the pandemic from news reports than from their personal doctor or the C.D.C. website.

Whether public trust in the authorities endures may be increasingly important in the months ahead, if conditions continue to worsen in states like Texas and Arizona, or if a vaccine becomes ready for the public.

Mollyann Brodie, an executive vice president at the Kaiser Family Foundation, who has conducted several surveys measuring coronavirus responses, said she was struck by the broad unanimity and public compliance reflected by the early surveys. “We were having a shared experience, and people all were doing it — these were numbers I have never seen in my survey work.” She said, “My fear is that as this politicization of information continues, as experts are less clear about exactly what to tell people and less consistent in the message, that that shared experience is starting to melt away.”