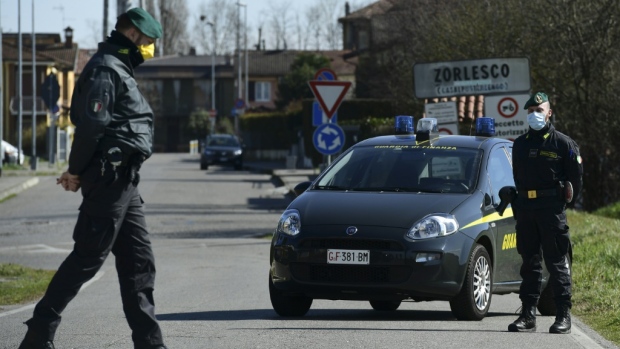 BORGONOVO VAL TIDONE, ITALY — Pietro Mazzocchi, 59, has the dubious honour of being the first Italian mayor to catch the new coronavirus — but sees it as an occupational hazard.

“Mayors are on the front line. They absorb everything, for better or worse”, he tells AFP from his home in Borgonovo, a town of some 8,000 inhabitants in north Italy.

“It had to happen to someone”, he quips.

It borders the Lombardy region, where some 10 towns have been put in lockdown after dozens of virus cases emerged.

Mazzocchi said he woke Sunday feeling weak, and had a temperature and mild cough. After his son started running a fever too, he alerted a doctor and had the test done.

His test came back positive on Wednesday, but he insists “I’m not particularly worried”.

The mayor lives with his wife, but they are currently confined to separate floors in their house.

“We know it can happen at any time,” he said, but admitted he was frustrated by not knowing how he caught the virus.

Since Sunday, more than 50,000 people have been confined to 10 towns in Lombardy and one in Veneto — a drastic measure taken to halt the spread of the disease, which has infected some 400 people in Italy, mostly in the north.

The country has recorded 12 deaths and by far the highest number of people with the virus in Europe so far.

“I have to try to remember all the people I’ve been in contact with over the last few days.

At the town hall alone, where he went every day, some 30 employees will have to be tested.

“There is a bit of concern and anxiety in my town, word is going around of course. I hope I’ll be the only one to get it.”

Like all mayors in northern Italy, Mazzocchi has had to soothe the fears of anxious residents while enforcing government orders to close schools and churches.

He says he is being inundated by requests by locals to be tested, but laughing tells them to “stay calm!”

“I’m the contagious one, I’m the one who should be banging my head on the walls!'”