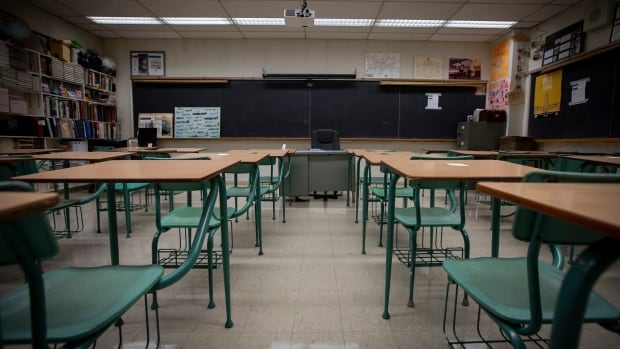 Ontario students could get an extended winter break or start classes remotely in the new year as the province considers ways to reduce COVID-19 transmission after the holidays.

Education Minister Stephen Lecce says he’s talking to health officials and “looking at solutions that may include some period out of class” at the beginning of January, but has not yet made a decision.

Lecce says he will announce a plan in the next week or two to allow parents to prepare. Premier Doug Ford told reporters nothing is confirmed at this time when asked how parents should prepare.

Last Friday, a spokeswoman for the minister said the province was not considering any change to the school year calendar.

That’s after the Council of Ontario Directors of Education said it had proposed starting the new semester with virtual schooling to allow students and staff to self-isolate after any potential holiday celebrations.

On Tuesday, Ontario reported another 1,249 cases of COVID-19 and 12 more deaths linked to the illness.

Some 133 of the new cases are school-related, including 73 students, 23 staff and 37 people who are not identified. A total of 670, or about 13.88 per cent, of Ontario’s 4,828 publicly-funded schools have reported at least one case. Yesterday, a Toronto high school declared an outbreak after 13 students tested positive for the novel coronavirus.

The newly confirmed cases drove the seven-day average down to about 1,423, from 1,443 yesterday.

It is the second time in four days the seven-day average, a measure that helps provide a clearer picture of longer-term trends, has gone down after two straight weeks of steep upward climb.

However, the province’s labs processed under 26,500 test samples for the novel coronavirus, far below the current capacity of about 50,000.

Still, wait times for test results continue to be an issue.

On Tuesday, Ford revealed his wife had to wait a full week before getting the results of her COVID-19 test.

“It’s unacceptable that it’s taking a week,” he said, adding he will be looking into the situation and wants to see “hardcore data” on the problem.

Ford opened his news conference by noting the impact of COVID-19 on mental health, saying “There are more mental health emergencies now than ever before.”

Ford announced the province will spend $37 million to “significantly” increase mental health resources across the province. That includes more funding for mobile crisis teams in 33 communities, support for addictions programming in correctional facilities and safe bed programs for those people in crisis to have short stays under care.

Toronto saw 569 more cases, more than double the 256 recorded in Peel Region and another record high for the city. York Region registered another 94 cases.

Other regions that saw double-digit increases include:

There are currently 12,923 confirmed, active cases of COVID-19 provincewide, the most at any time since the outbreak began in late January.

Meanwhile, the number of people in Ontario hospitals with confirmed infections continue to increase, up 29 to 529. Of those, 127 are being treated in intensive care and 75 are on ventilators.

Ford was also asked Tuesday about his response to Chief Medical Officer of Health Dr. David Williams saying he is hopeful Ontario could be in the green zone, the least restrictive category in the province’s pandemic plan, by Christmas.

To that, Ford said, he hadn’t yet spoken with the CMOH, but that Williams is a very “positive doctor.”

Still, he said, “I’d be very cautious at Christmas.”

[Note: All of the figures used in this story are found in the Ministry of Health’s daily update, which includes data from up until 4 p.m. the previous day. The number of cases for any particular region on a given day may differ from what is reported by the local public health unit, which often avoid lag times in the provincial system.]